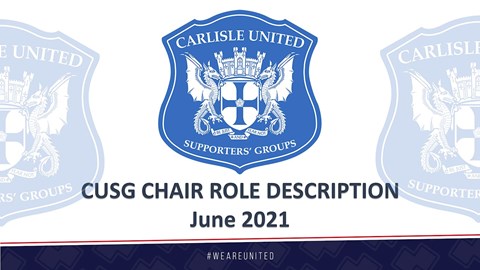 Simon Clarkson introduced the meeting which was held solely to address the appointment of a new Chair.

Simon said it was an important role to fill, and the group needed to feel comfortable democratically with the process and the terms of the role.

Dan said he had no issue with John Kukuc being chair. John had told him three people had spoken to him about the role, but didn’t say which three people. Simon said he spoke to John. John had similar conversations with others.

Matt said he had spoken with Barbara, the disability rep. He said he shared her concerns. He said the previous process may have looked like John being shoehorned into the role. He said the process of selecting a chair could have been opened up wider than the existing CUSG group reps and associates. He wanted it to be an open and transparent process. He said CUOSC get criticised for being small and cliquey. He suggested the CUSG had seen real improvement in two years since he and Dan joined, although he stressed this was not necessarily because of their addition. He said CUSG couldn’t be efficient without transparency.

Simon said he had assumed all group reps would be engaging with people  in their groups who might want the role of Chair.

Nigel D explained why CUSG came to exist in the first place. It was designed to bring groups together. He said CUOSC were categorically not trying to shoehorn anyone in to the position of Chair. He said he had gone back to the CUOSC board to ask if anyone was interested but they felt an independent candidate was better. John’s name came up in ensuing discussion. He had left the CUOSC board after a fundamental disagreement, was independently minded and would not favour any of the constituent groups as Chair.

Billy and Nigel D had both spoken to him. He wanted to do it but also wanted to be independent. He was not put forward by CUOSC or the London Branch, of which he is a member. Nigel D said all groups had the same opportunity. He didn’t see an issue with that process.  He reiterated that the group were here to work together to improve the club. Issues with CUOSC he said, were outdated.

He said CUOSC were in a difficult position, due to their board reps having to respect confidentiality. He stressed that he wanted transparency and the right procedure. He didn’t want CUSG to fail, and he wanted them to continue to back the club. He said CUOSC did the best they could given the lack of a more specific process other than to appoint a chair by the date of the following meeting.

Simon addressed the draft job profile. The group were happy with the detail in the bullet points. It was agreed that the SLO should be in the group via the constitution.

The profile had been drafted by Nigel C to start the debate, but every element was for CUSG to consider and change, with amendments from others.

Dan said the admin side of the role wasn’t as onerous as made out previously. Simon agreed the agenda is not a big admin task. It is often repeating, with topical items to add. Gary suggested if someone wasn’t up to doing all the admin work, they might not be the right person to fill the role.

Simon then asked how the next part of the process should be handled.

Nigel C said it was important that the person who takes the role is not tarnished by the process that elects them, and commands the respect and confidence of all the groups with the process and appointment being independent of the club and determined collectively and only by CUSG.

Matt said he wanted the process to be given the same exposure as the SLO appointment. He gave kudos to those from CUOSC and Simon who spoke to John Kukuc about the role initially. Andy was concerned about putting the role on the club website. He said the SLO role going on the website had got a negative reaction from some people and undermined the independence.

Matt said it was seen by some as a ‘club appointment’.

Nigel C said he was pleased that more people are prepared to get involved. He said people sometimes look for conspiracies but CUSG need to make rumours go away by being open. He reiterated that the club had no desire to have any part in the appointment. Simon said Radio Cumbria and the N&S will help publicise the role.

Dan was concerned any move to appoint a chair from outside the group might reflect badly on CUSG as a whole, reasoning that people may question why nobody from within was prepared to step up. Nigel D said people already have lots of work within their own groups and may not want to take it on. Outside eyes and fresh ideas, said Matt, can be a boost to any organisation.

The group agreed a role specification and agreed a process to update the constitution and go public to invite new applicants.

The process will be dealt with completely outside and independently of the club or any specific group with priority to publicise via the local media. The group did that to demonstrate it was independent.

It was agreed to advertise the role on Tuesday June 22. July 4 would be the deadline for applicants. If there were three or more candidates, some sifting may be necessary by a discussion in a group meeting. Subject to the numbers of candidates putting their names forward, a further meeting on July 8 would be held to make the selection.

All constituent groups present at the meeting on the 8th to have one vote each including Gary as LGBTQ rep. The chair would only vote in the event of a tie.

All applicants for the role to send their personal statement to hello@cusg.co.uk.

Simon then declared the meeting closed.