United boss Chris Beech confirmed that the door is still open for defender Rhys Bennett with the centre back having been offered a new deal with the Blues at the end of the last campaign. 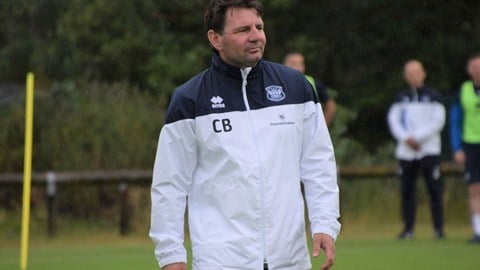 MANAGER: We have to work intelligently and diligently

Bennett, 29, initially teamed up with United in November 2020 on a short-term deal. That was extended until the end of the 20/21 season during the January transfer window, and five goals in 26 games prompted a further offer after the last ball was kicked.

Speaking today, the gaffer said: “As of now, he’s not signed here yet. Whether he will, that remains to be seen.

“At the same part, like all the other players because of the platform they’ve been put on, they’ve progressed on it, they’re hotter property from coming in the building to being available for others.

“It is where it is. I’ve not seen his name on Newsnow anywhere yet, I’ve not seen you tweet anything, I don’t think he’s signed anywhere else at this point. You just never know in football.”

But does the longer it goes without his signature mean that it’s less likely to happen?

“Possibly,” he replied. “I know, a bit like Zach [Clough], Rhys wouldn’t have come here without that respect of me having worked with a player in the past.

“In the future, we’ll see how that develops. Where we are sitting talking to you this morning, he’s not signed at Carlisle.”