One thing that shone through from our Friday morning interview with Morgan Feeney was the steely determination he clearly has to make his mark, having been through the frustration of picking up an injury early in his Carlisle career. INTERVIEW: It's been tough but very enjoyable

When asked what he wants from the 2021/22, is answer could not have been more direct.

“For me I want it to be a massive season,” he said. “I want to be a big part of playing this season. Competition for places is high in most positions, so it won’t be easy, but that’s how it should be.

“Everyone’s got to be on the ball and sharp, which the lads have been. It drives each other on and makes sure the standard’s high constantly, and it’s only going to create a winning environment.

“I’m hungry every season to really push myself to do well. It’s been a while since I really got myself in full flow, so this season it’s important for me to kick on and I’m really excited about that.

“The only goal I’ve got this year is to hold down a regular place. I want to get in the team and stay in there, and then see where that takes me.”

But does he feel he has anything to prove with the way things went last term? 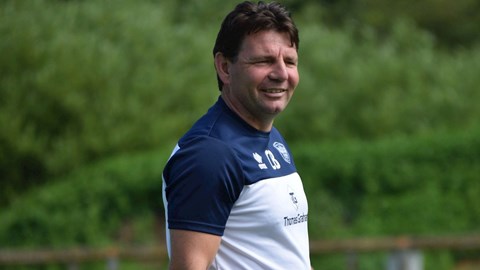 MANAGER: It gets a response from the players

“I believe in myself and in my abilities, but it’s just about showing it to everybody now,” he told us. “I really appreciate the faith that’s been shown in me by the staff, so it’s about repaying that. It’s about getting back to where I was before the injury.

“The manager has been brilliant with me from day one from when I originally signed. I know what he thinks of me and the plans he has for me going forward, and when I got injured he was really supportive.

“He and the lads got me through it and he has faith that I’ll come back and do well. I’m really keen to get out there and repay him.

“Coming towards the end of last season my focus was on getting myself feeling right and getting back into good shape.

“I knew I was going to have the summer to really hammer myself and get myself ready for what we’re doing now. I’m feeling good and ready, and that’s massive for me.”

And his first real opportunity to announce himself will be the run of pre-season friendlies which are now just over a week away from kicking off.

“They’re the opportunities to really see where you’re at,” he agreed. “You get to test yourself against better opposition, challenging opposition.

“It’s a different test each game with the teams we’re playing. It’s important, you can put together the hard work you’re doing now, and in these games it’s where you really get the rewards from that.

“It’ll be brilliant to put the strip on because it’s been a long time coming. I’m really looking forward to pulling on a shirt with my name on the back. It’ll be good when the fans are here and I can show them what I can do.”

That moment will be even more special when you consider the timing of the break to the bone in his foot.

“It happened, I wish it hadn’t, but it’s been and gone now,” he said. “It’s been frustrating but it’s easy to let yourself dwell on things like that. It’s all in the past for me now, it’s gone, I can’t change it.

“All I can affect going forward is what I do next. That’s all I’ve thought about really. The nature of the sport is that you can get an injury, but I can only focus on going forward as far as I’m concerned. 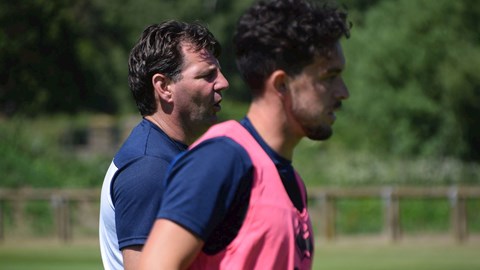 “Like I say, I’ve got myself in the best position possible to have a good season. It was tough going through it, but it also wasn’t. It’s tough because it’s not ideal when you break your foot on your first day of training at a new club.

“It’s the worst nightmare scenario, but there was nothing I could do about, so why let it drag you down. All you can do is knuckle down and get on with it. You look at what your next step is, at what your short-term goal is, and then you start working towards the long-term goal.

“That’s the way I looked at it all. It was about reaching this point rather than concentrating on negatives. Everything is positive for me now and it’s up to me to build on it.”

We couldn’t let him go without investigating whether or not the arrival of a player from the Red side of Merseyside [Corey Whelan] had sparked any friendly banter in the dressing room.

“We’ve talked about because I actually played against him when I was at Everton,” he confirmed. “I was also quick to remind him of the 2-0 win at Anfield last time out.

“He’s a brilliant lad, we’re on the same team now, and we’re getting on really well. I think we’re developing a good partnership, so if we play together that’ll be good this season.

“But, yeah, I’m a massive Blue. I was a season ticket holder for years so as you can imagine it was brilliant to be playing for my club. It’s always going to be an aim to get back to that.

“In the short-term I want to play here and do well. I want to go up the leagues with Carlisle, but one day I want to play in the Premier League. I want to do that as soon as possible really, but I can only control what I can control.

“Ultimately performances on the pitch are going to determine what happens to me.”