United had two squads in action on Saturday afternoon with assistant head coach Gav Skelton on manager duties against Hebburn Town, with South Tyneside bathed in sunshine on what was the hottest day of the year so far. 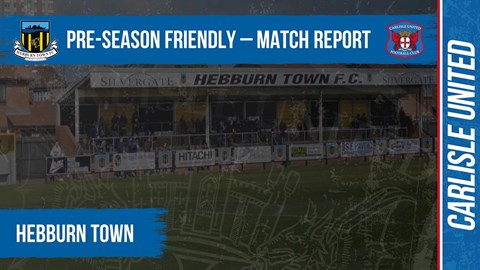 Speaking about the game, he said: “It was obviously nice to win but the important thing is that it was more minutes for the lads.

“It was a roasting hot afternoon and the pitch was quite dry so the tempo never really reached the levels we hoped for.

“It’s another good workout, Tristan got another two goals, and everyone got just about 90 minutes, so it’s all really pleasing.”

With all of the first team squad at both venues notching up close to 90 minutes each, he added: “I think that’s why it was beneficial to split these games between Hebburn and Workington so that everyone got the maximum possible time.

“But with it being so hot we had a lot of drinks breaks and the flow of the game never really got going. The ball coming back into play for throws and things like that probably wasn’t at the pace we would have liked, but it’s still been an important afternoon.

“Hebburn played really well on the day and we respect to them for that. They had a couple of opportunities and they went close. We created numerous chances and we perhaps just needed to take a few more than we did.” 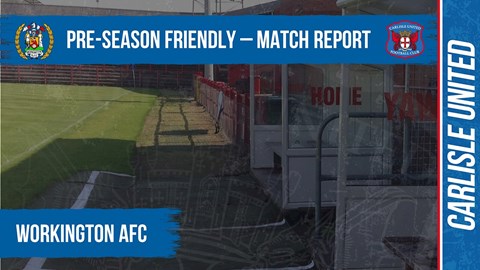 The goals came from livewire forward Tristan Abrahams who took his tally to three for the week.

“As we said the other night, his runs are brilliant and he’s very dangerous. His combinations and relationships are growing and he could probably have had another couple of goals himself on the day.

“That’s being greedy but the last two games will have done his confidence the world of good. As a group they’re now working towards the tempo and expectation we want, but that will come.

“We’ve structured the week to make it as beneficial as possible for everybody and we’ve come through it all with no injuries. That’s a positive for us.

“We’ve played in real heat, which is how it might be for the first game, and the players have showed they can cope with that. The fitness levels are good, and we’ve played on a pitch that is dry, with longer grass, so that’s something else that’s a bit different.

“Hebburn have fantastic facilities, they’re a really good club and they’ve looked after us magnificently. It’s been a good day.”

And with a healthy showing of United fans at the stadium, he said: “It’s a really impressive place. We didn’t have huge numbers here, I think there’ll have been more at Workington, but overall the support was great.

“The boys all commented on how many supporters we brought over and that shows the hunger for football, especially with those who went to Workington as well.

“What we have to appreciate for everybody is that it was unbelievably hot. You can tell the pitch here will be very good but there was a bit of grass on it and it was very dry.

“That made it hard to get the tempo going and it was frustratingly slow at times. You’ve got to understand the reasons behind that and make sure it’s still a worthwhile exercise, which is what both teams did.

“Thank you once again to Hebburn. They played the game in the right way and it was a good test. We came through with no injuries, and that’s very pleasing. It’s what you want at the end of a busy week.

“The lads can rest now before we go again on Monday for another busy week.”