Carlisle United are delighted to confirm that striker Manasse Mampala has signed a one-year contract with the Blues which keeps him at Brunton Park until the summer of 2022. 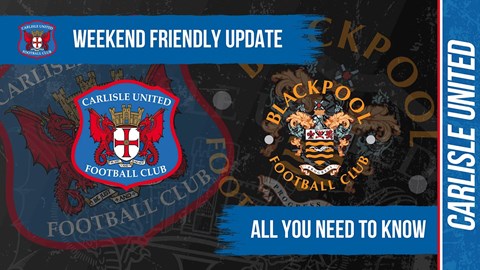 Mampala, who turned 21 last week, has spent the summer on trial with the Cumbrians and has scored twice in his pre-season friendly appearances.

His all-action approach has endeared him to the fans with an ‘announce Manny’ response accompanying every post the club makes, from ticket news to match reports.

The tall, strong forward was born in Kinshasa, in DR Congo, and move to England at the age of two. He joined the Everton Academy as a 15-year-old and became a regular in the under-23 squad.

He enjoyed a standout season for Paul Tait's under-18 Blues side in 2017/18, contributing 11 goals and chipping in with six assists in 18 appearances in the U18 Premier League.

Mampala signed his first professional deal with Everton in July 2018 and grabbed his opportunity to earn a second one-year contract in summer 2019 having been part of the team that romped their way to league and cup success under David Unsworth that year.

He featured in the EFL Trophy games against Mansfield and Burton for the Toffees early in 2019 and joined QPR on a one-season contract shortly after he’d made those appearances.

Manager Chris Beech said: “It’s no secret that Manny has been with us for a few weeks now, during pre-season, and he’s done really well.

“I was aware of him at Everton, he was a regular goal scorer with their under-18s, and he progressed through to the under-23s where he perhaps didn’t have the same levels of success.

“Personally I think there were a couple of reasons for that. The physical and technical elements of the game change, more so the demands in those areas - the Premier League sides have the fire power to replace rather than enhance, which can often be an unforgiving environment.

“In the under-23s Manny ended up playing wide because of his pace, and to suit some of the other players they had in the building.

“Ultimately Everton allowed him to leave, and in stepped QPR, but put the pandemic and all the other nuances into the mix and he found himself a free agent this summer, probably at the wrong age and with little experience.”

“Youth football is my background, I’ve worked in environments where you have to make what you’ve got better, however you manage to do it,” he continued. “In Manny’s case I feel he gives us something to work with, and perhaps with some positioning and traits tweaks here and there.

“He’s very much a work in progress, but if he listens and learns he’ll be an exciting player. He’s already had the introduction into the staff offices, we’ve been pulling him in and shown him clips of what we want him doing and how we feel he should be adapting to us.

“Manny is another that epitomises what we’re trying to do at Carlisle, by representing this football club through hard work, honesty and effort. Manny has personally put himself out to come in with us, we’re not around the corner, he’s shown up and trained hard.

“For those that haven’t seen him play he gives us something different. He’s 6ft 2” and strong, and I’d like to encourage the physical side to his game.

“When he wants to be he can be a handful. He’s already integrated himself well within the group and once the supporters see what he’s all about I’ve no doubts he’ll also become a favourite with them."