United’s chief executive Nigel Clibbens confirmed last week that lost trading income due to Covid remains well in excess of £1m, despite a £360,000 Premier League grant package to cover some of the monies which will not be received through gate receipts. 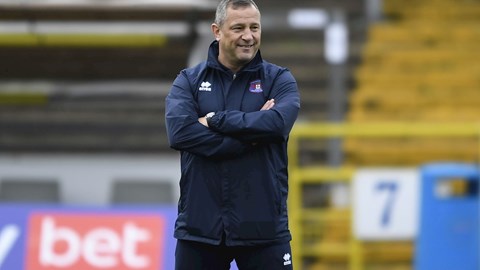 Speaking about the situation facing the club on Monday, director of football David Holdsworth said: “I think every club is facing their own situation but from what I can gather and from what I hear, given the information that’s been there over the last few days, I think we’re ok and we’re continuing to be very prudent.

“We’re doing all we can to make sure the club is healthy in terms of finance, and it’s worked very well so far. I’m delighted to be able to say that.

“I think Nigel has explained very well how the central payments were divided up, and what that has meant to the club, and obviously the initial payments were welcome. But, we have to acknowledge, the longer this goes on the further that has to stretch.

“Sustaining what we do with no supporters coming through the gates is very difficult, and commercially it’s very difficult because we don’t have the advertisers and sponsorship.

“We, as a club, are trying to reach out into the community as much as we possibly can, but it’s difficult to keep expecting to get help from the EFL, the Premier League and even the FA.”

And with commercial partners EWM going through an administration process at the moment, with the loan facility to United being mentioned as part of that, he commented: “We have a fantastic relationship with EWM.

“I’m really relieved and delighted that they seem to be able to have rescued their situation, they’ve been brilliant supporters for us, magnificent support.

“Whilst it’s not always vocal, we know they’re there, we want to make sure that continues, but regarding EWM, they’re not putting those struggles onto us and we can only thank them for doing so.”