A very young Carlisle United side returned to action on Saturday afternoon having not taken to the field in anger since 16 December. 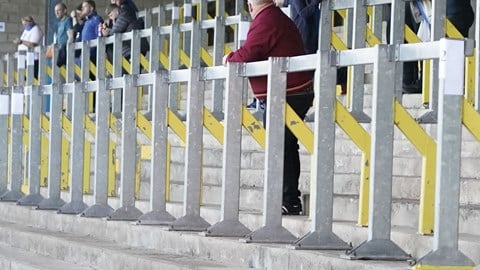 And, with only four second years available, the visiting Blues took control of the game and scored the goals which gave them something to protect as they tired through the closing stages.

“We got our first goal just five minutes in through Sam Fishburn,” youth boss Eric Kinder said. “It helped to settle us down and we played some really good football.

“With numbers low we had to go with a back three [Steele, Barnett, Kilsby] and that was disrupted early in the first half when Josh Barnett started to struggle with what we think might be a hamstring problem.

“That meant we had to rejig again and we ended up with Ellis, Kilsby and Steele as our defence, and they did extremely well.”

“They equalised on 15 minutes through a penalty and I have no complaints about that,” he continued. “The ball was there to be cleared and Dylan Garvey was unlucky to catch the boot of their player at the same time as he made contact with the ball.

“Both sides were going for it but we got back in front with another goal from Sam Fishburn. He’s growing in confidence all the time and he’s hitting the back of the net regularly, which is nice to see. “Lewis Rooks added a third in what was a good spell for us and we worked ever so hard after that. I have to say, Keelan Leslie and Adam Walton were outstanding and they set the tone for the rest of the team.”

“We started to get tired as the game wore on, which I expected, because we haven’t played for so long. Having said that, we could have scored more.

“Dylan Garvey had one chalked off which was really harsh. The ball went into the air and Sam challenged the keeper for it, and the ref blew the whistle just as it dropped for Dylan to finish off.

“It wasn’t a foul so we were disappointed with that. Ryan Carr [signed from Newcastle last week] was put clean through not long after that and it looked like he’d done everything right. He tried to clip it but the keeper got just enough on it to put it over the bar.”

On the injury situation, he told us: “Ryan Swailes will be another two or three weeks, and we’ll be without Elliott Day for a couple of months, which is a real shame for him.

“It’s actually better than we first thought, because we thought he’d done his ACL, but it’s still very frustrating for him. We obviously lost Barney 20 mins into this one, but hopefully he’ll be back sooner rather than later.

“On top of that we have Lewis Bell still recovering from Covid, and we don’t want to rush that. We want him to feel right so that he can push on again.

“Despite all of that, and even with two under-16s thrown in at the deep end, and a team shape we wouldn’t usually go for, we worked hard and we dug deep when we needed to, and that’s all you can ask.”