The under-18 side got back to winning ways on Wednesday afternoon with a solid performance against Port Vale, with goals from Dylan Garvey (2) and Sam Fishburn enough to secure the hard-fought victory. 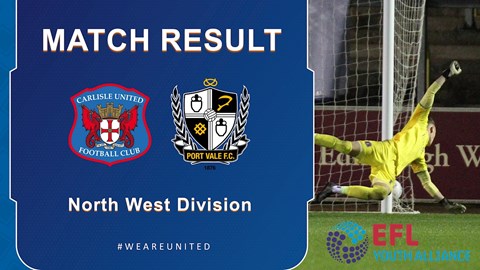 We caught up with academy boss Eric Kinder to get his thoughts immediately following full time.

“I was disappointed on Saturday with what happened against Blackpool because we’d earned the right with our results to go top of the league before Christmas, so that game was first place against second place,” he said.

“It was a game we were really looking forward to, but it looks like they’ll probably win the league now, I would think. Unfortunately we didn’t turn up on the day, but with the way football is in these strange times there’s always another game coming up quickly to help you put things right.

“Result-wise we did that today, but I’m still not happy with the performance. We still haven’t got going again properly since Christmas, so that’s still to come. We went to Walsall on 13 December and since then we’ve only had Port Vale away and that Blackpool game. That’s why I still think we’re short.”

On the goals scored that sealed the deal, he said: “I enjoyed the second goal, that was good to watch. It was a good passing move. Well done to Dylan Garvey, he got a couple more and he’s starting to score goals for us from midfield.

“I’ve been onto him all season about shooting and getting into good positions more. He’s been making the runs but he hasn’t been shooting as often, but that’s three goals from his last two games now. Well done to him.

“Sam Fishburn got another one and he’s another player who has added goals to his game. His hold up play is decent for a centre forward and he links up well. He’s really hard to play against and, like I say, the goals are coming for him now.

“It’s another well done for him because he’s looking like he’s going to be a decent player, given time.”

With Vale down to ten men early in the piece, it became a real battle as they kept things tight in every area.

“I remember when we went down to ten men against Morecambe up here, just before half time, and we got together and we held out,” he commented. “It is sometimes hard to play against because you can start to force the ball more.

“This game just isn’t that easy. Look at the other night when Exeter went down to nine men, they didn’t concede until the last minutes of their game. That’s because they galvanised, they got together and they worked extremely hard.

“Whatever the reason, it can be hard to play against, but credit to the lads because they eventually found a way.”

“I’m pleased about the win, but I do still want more,” he continued. “We were inconsistent at the beginning of the season, then we got that right, and we were unbeaten for something like three months.

“Coming back from a three-hour plus journey from Walsall having won 4-0, and having watched us play the way we did, I was thinking that we were ok. Obviously the weather and the Covid situation closed us down so we’re chasing it again now.

“I just feel we haven’t quite got back to where we were. We’ve lost Elliott Day to a long-term injury and you can tell when he’s not playing. Lewi Bell has had his Covid problems and we haven’t seen him for a while.

“He was on the bench for this one but there was never any intention of using him. It was just a case of getting him back after five weeks of struggling.

“Ryan Swailes is still working his way back, and Lewis Rooks is only just getting into it again from his injury. Dylan Garvey is another who has been out, so we’re all getting back into our stride at the moment.”

“The thing I’m not happy from this one is that we could and should have played better,” he concluded. “We forced it too much and we gave the ball away too easily.

“We’re now into a cool down day on Thursday, then match prep on Friday as we get ready to face Accrington. Hopefully the weather will stay like this and we can get out on the grass again.

“We are a better side when we play on grass rather than astroturf. That’s fantastic to train on but, sorry, not for games as far as I’m concerned. It doesn’t sit right with me for that.

“It’s a great tool to have for training, and what I would give to have astroturf here. We need to train, and that would give us that, but it’s grass for games for me.”