We caught up with United boss Chris Beech shortly after full time on Tuesday night to get his reaction to the narrow away defeat at Harrogate. 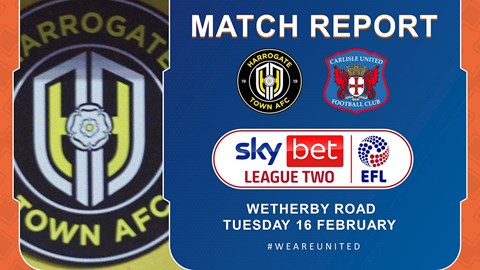 MATCH REPORT: The return to Harrogate

“They got the upper hand from a bit of rashness from Nick [Anderton] and if he doesn’t do that it’s not a penalty and it probably goes in 0-0 at half time,” he said. “I actually thought before then, even though it was a basketball style game, when we did get the ball down and Brennan [Dickenson} played some lovely inside passes, it looked like something was going to come for us.

“But we gave the penalty away and it gave them ascendancy from that point. The lads did their best in the second half but you do want more from players to make sure they win that header. If a set play is going in then you want them to make contact or win the second ball.

“It was loose a lot so there’s got to be more reading it and wanting it more, and then the ball comes to you. It didn’t quite happen tonight but it’s great to play again. I want to win, but it was good to play and hopefully we can get in some rhythm now and play regularly.

“It was great to get outside last week as well to get ready for this game. There were no qualms from us in preparing for this one, but we didn’t get our points and that’s always going to be frustrating.”

Having seen the ball enter the home box on numerous occasions, he spoke again at the frustration of not seeing the target tested more.

“It’s like I’ve said, we’ve got to want it a little bit more, be a little bit more astute at reading the play off the ball,” he told us. “Added to that we need a bit of quality. When we had a little bit extra it didn’t quite fall for us, but if you want to gain something you’ve got to work really hard for it.

“I think we did work hard but we didn’t have the edge of a bit of difference, and yet we had a lot of attacking players to make the difference, but they couldn’t quite make it happen tonight.

“We made the substitutions because we don’t accept getting beat, you have to go for it. It’s not nice to get beat but well done to Harrogate. We have to learn that when the ball does come in, don’t kick fresh air.

“It’s a free volley, you’ve got to score, that’s it. There’s no coaching in that, it’s the individual making good of their opportunity and making sure it’s them that get their name on the back of the News & Star.

“The pressure was already stacking up with the players that were on the pitch, the substitutes came on and tried to take it up a notch, but we were already putting Harrogate under pressure. It’s good to see that support of each other but we’ve got to make sure we step on and take our chances.”

“It’s another of those situations where if we score first the lads feel better,” he continued. “The conditions were rough and it was hammering it down with rain before kick off. When you go behind it can feel like one of those days.

“Like I said, the pitch is really tight and the only space you create is when you go on a diagonal. What they do is kick the ball forward, but they then don’t play the ball, they play the man, and they play off the bits from that point.

“We’re trying to play more football than that, but we didn’t play enough of it to create our shots and get our goal. It was a good team effort in terms of having a go, but if you aren’t doing what you want to do regularly it’s always going to take an edge off you.

“That’s why being out there hasn’t done us any harm, because we need to get that edge back. You can only do that by playing games. You can’t deny the lads gave their all, they did, but we still need to get in rhythm and I don’t think we’re there with that at the moment.”

With both the Harrogate and Forest Green defeats coming from penalties given against, we wondered if that was a frustrating element to the play.

“It’s just daft, isn’t it,” he told us. “I talk to players about doing an extra yard, there’s no need, both penalties are not from goalscoring situations. The one against FGR is a millimetre in the corner of the box and he isn’t going to score from there.

“The lad that Nick’s gone against, he’s going wide, not coming inside to score. See what happens, trust your goalie, Paul’s a good goalkeeper, he made a good save after that. Stay on your feet.

“You’ve got to trust yourself more than anything else and don’t commit to the rash tackle. Once you do commit you give the referee the opportunity to point at the spot.

“It was tough tonight as well, the weather conditions were amazing an hour before the game, almost the rollers were on to sponge up the water to make sure the game can go ahead. I thought here we go again!

“That’s what happens – you get put into these positions. We’ll dress ourselves down, understand why we’re not getting what we want tonight and then we can train outside on Thursday and get ready for Saturday’s fixture.”