A regular feature of our weekly online press conferences is the now expected and almost demanded injury update, where Chris Beech either does a Boycott and sends the questions bobbling straight back down the wicket, or he uses the Stokes method of completely smashing them straight into the back row. 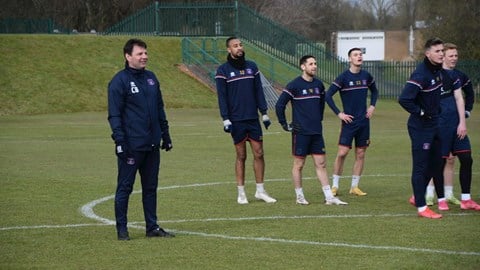 But like any good bowling attack, we all keep trying to find the swing and the seam as we look for those nuggets of information.

“Nobody has texted or rang me,” was his reply to the initial shoulder height bouncer when asked if there was anything new to report. “That’s pretty good because normally my physio tends to deliver that pretty early. That’s good news.

“We know about Morgan [Feeney] and a broken foot is a broken foot. He’s getting another x-ray to determine what happens next in the healing process. As soon as he’s passed that point of rehab, it’s exactly where it is.

“Hopefully it’s good news and he’ll be good to go and supporting the lads that are playing now. Jamie Armstrong is the same. He needs time to recover from his break and he’ll be frustrated that he’s missing out as well.”

On George Tanner, who made a welcome reappearance on the team sheet at Harrogate, he said: “He’s a very physical player as an athlete, how he looks after himself, he eats well he’s always doing extra gym work.

“The beauty about having an arm injury is he could keep his legs strong, and do those sort of things that can hold you back if it’s a leg injury. Normally when players get injured in their lower body, they work on upper strength which sometimes isn’t a great gain to a footballer.

“The other way round I think has benefited George. Of course his arm’s stronger than it was before, because he’s got like a steel snooker table on his x-ray pictures in his collarbone. It’s great to see him back, and again, like anything, he’s not played for so long like many of the players, but now we’ve started back with that.

“He’ll feel a lot better for playing the other night even though he didn’t get what he wanted. I think he tired towards the end of the game, but of course you would do. We’ll train well today and I’m sure he’ll be available and up for playing against Salford, if he’s selected. His arm is perfect.”

And Tuesday was also a first 90 minutes for the club for the versatile Brennan Dickenson.

“If anything I thought Brennan looked quite sharp,” he commented. “He played various positions – inside left, outside left and ended up at left-back. That’s because the answers come to me within that, trying to gain a yard and an intrusion on your opponent.

“The game didn’t go to plan in terms of what we wanted, but there was definitely an attack from ourselves to try and make an influence. Brennan playing left-back, you’re almost playing a left-winger at left-back really, he’s got that capability of a change of pace, crossing on the move and shooting from distance. Those things are vital when you’re trying to get a goal.”