Tuesday afternoon’s Leyton Orient match postponement took the tally of games lost during a crazy 43-day spell to nine, with a significant drop in temperatures through the night [a plunging -7 was recorded] affecting the vulnerable shaded Warwick Road End to the point where it had no chance of making a recovery, with the thermometer struggling to get above zero even through the warmer parts of the day. 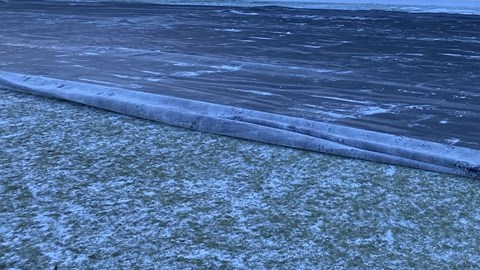 MATCH OFF: Orient game postponed due to frozen pitch

Speaking after the Orient game was lost for a fourth time this afternoon, manager Chris Beech said: “We’ve had nine games called off now since 29 December and it’s frustrating.

“We’ve started and stopped one, and we’ve had the other eight called off at various stages. Three of those were due to a massive outbreak of coronavirus in our working environment, and then we have all of these other factors with weather, electricity and whatever else comes at us.

“I feel sorry for our supporters because I know that if you’re a Carlisle fan you look forward to these parts of the week to get excited about it. What we do as professionals within our sport is prepare correctly for each of these games and we get ready to go toe-to-toe with a great opponent.

“We do our normal prep, we watch videos, we make decisions, we have team selections and disappointments, and then it seems that we can never see it through. To go through that nine times in just 43 days is really frustrating for the players, the staff, me and everybody else.”

“I keep saying it is what it is and that there’s nothing we can do about it,” he continued. “We tried our best today to make sure we could play a game but it hasn’t gone our way.

“What you won’t know is that when the original Orient game was cancelled we gave them a different date, but due to travel plans and coming up north in the same part of the week they then asked for another date, which we agreed to.

“I think that was the right thing to do because you have to try to work together as much as you can and not get to a point where you’re trying to gain an advantage in an unfair way, but at the same time we want our sport to be played out properly.

“It’s really frustrating for Orient now because they’ve travelled up, they’ve stayed over and they were ready to play. I think there’s a lot of respect between our clubs because of how we’ve acted since the original game was called off.

“Martin Ling [Orient director of football] is a very experienced football person, he’s been in the game longer than I have and he’s Leyton Orient through and through, and we agreed out on the pitch that the Warwick Road End is shaded and that it wasn’t going to thaw.

“It was at -7 degrees at one point last night according to the BBC, and that was against the -2 that was forecast. You can’t legislate for that, it just is what it is.”

With Saturday-Tuesday fixtures now almost guaranteed between now and the second weekend in May we wondered how much it affected planning, with the fixtures stacked up following the unbelievable set of circumstances faced by the club.

“I don’t think it will cause us too much of an issue,” he insisted. “It might cause you media people a bit of an issue on your days off, you’re going to have to crack on with back-to-back games, so I don’t know what you’re going to do.

“We might get an opportunity to play two games in one day soon, who knows. What I do know is we can only play it when we get told to play it. I’ve been very proud of the players over the period just discussed, we’ve had a massive outbreak of coronavirus, we’ve had ridiculous weather, we’ve had nine games called off.

“We’ve travelled, we’ve started a game and stopped it after eight minutes, travelled and had floodlights fail, we’ve been an hour short of Newport on the day of the game, and like I say, that was the first day back at work after a 10-day shutdown because of the virus.

“We decided to travel on the day, we didn’t want players spending too much time in a hotel because of the positive cases we had. To get going again, shoved in the deep end to play two top teams in our league in a four-day period - I was really pleased to get a victory in that period.

“Unfortunately we can’t do what we want to do today, represent us, the supporters, the chairman, everybody. It’s hard getting ready for something nine times and not doing it, it’s no surprise to her me say that. Maybe once or twice, but nine times is a different type of test.”