United boss Chris Beech revealed at his online Friday morning press conference that the club had been dealt a double injury blow with midfielder Jamie Armstrong and defender Morgan Feeney both ruled out with breaks picked up during a training session. 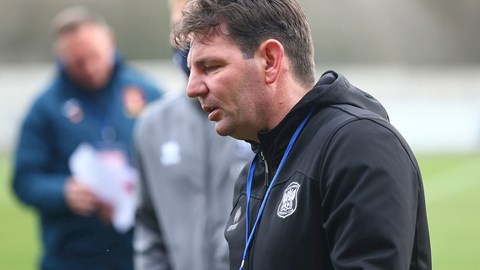 “Morgan has been really unfortunate,” he told us. “He’s broken his foot during training. We only managed to play outside a couple of times and in one of those sessions he looked very good.

“Unfortunately we had two incidents in a single session that caused a broken foot and a broken ankle in another player. It’s frustrating for everybody, but it happens a lot.

“Both incidents, there wasn’t anything to Morgan’s other than him being first to the ball, strong in the challenge. Somebody booted his foot, which has probably happened a thousand times to him, but the edge of the stud caught the bone on his foot and broke it, which is amazing.

“He looked very good, very strong, very quick, like I know him from previous.”

“It was also unfortunate for Jamie Armstrong, he broke his ankle in a tackle,” he continued. “It was the first time we’d got outside, but these things happen.

“It was just a small-sided game as well, and it’s just the way it sometimes happens. I’ve never experienced that in a session, two breaks at the same time, but it is what it is.

“I just feel sorry for the lads, two good lads who want to do well – with a bit of luck and some good rehab we’ll hopefully see them back soon. Jamie’s probably going to be a bit longer, but Morgan not as long.

“The good news is from this conversation, it happened a couple of weeks ago. We kept it to ourselves. We’re not playing this weekend, and as we get everybody back together now and come out of the period we’ve been in, we can look to attack the games as best we can, but we will have to wait until they can assist us.”

And with the club now coming through the other end of a Covid outbreak, he commented: “We’re still learning, but the way it affects people is different in everybody.

“It’s only been major in one player really, the youngest one. Lewi Bell has been affected by the coronavirus, he’s found it hard and isn’t back at work.

“They class it as long Covid, but nobody really knows too much about it or how it can affect professional athletes. Hopefully he’ll make a full recovery, of course he will, because he’s young, but we’ll have to wait and see.

“Everybody else, it’s been almost like a bad cold, some haven’t had any symptoms whatsoever. It brings all those different things at you – you just have to adjust. It’s why when me and David spoke, we put the squad together to try and attack the next 23 games.”

And on other injury concerns, he told us: “Josh Dixon had a slight knock. He should have played in the reserve game really, but we just made sure he wasn’t risked. Hopefully he’ll be right at least for tomorrow [Saturday’s training session].

“He’s working a lot harder, teaching him how to get the ball back, he’s got great capabilities, passing, fitness. Like any boxer, if you can punch but can’t take a punch and have any defence you’re only half as good.

“As a football player if you can get the ball back and play with it you’re twice as good. He’s learning those traits and doing very well in that, so it will be good to see him.”