United’s first team were back on the club’s main training pitch on Thursday morning having lived a rather nomadic lifestyle with the severe weather conditions taking the squad out to Kendal Rugby Club at the weekend just so they could get their important preparation work done. 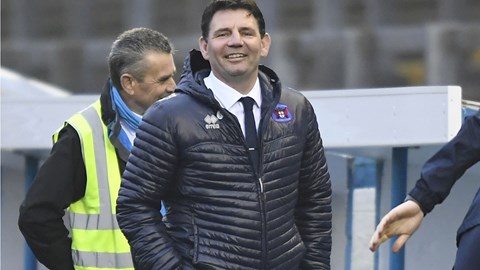 MANAGER: Hopefully we can now enjoy our sport

Manager Chris Beech spoke at his virtual Thursday morning press conference about the training plan heading towards the weekend trip to Salford.

“It’s superb, we’re out on our training ground today, we’ve just checked it, so it’s drained alright,” he said. “Dave’s doing a great job, as he always does with lining and rollering.

“We also have the offset if the weather caught us out that we can walk down Warwick Road half a mile and train at the Academy. Which is superb. It is that coming together as a community that allows us to do what we want to do – train outside, train in Carlisle, and get ready for a fantastic opponent.”

Speaking more about these important emerging relationships, he commented: “Hopefully we can keep these relationships going. There’s Richard Rose, and both Kendal and Penrith have been a great help in the past, but are governed by the RFU which are currently in a lockdown situation.

“Anyone that can help, any sort of support, and providing it’s relevant and of a quality that helps us do what we’re doing, and they are with those facilities, then it’s just brilliant. We will utilise it and probably look to utilise it again in the future.

“But I have no doubt when we all get the better of Covid, maybe that’ll change from their own personal circumstance, cos they’ll probably be having PE lessons at the time we want to train on it. At the moment it’s not like that, so we’ll see.”

MANAGER: We have a squad that's competitive

And as he’s said on numerous occasions through this extremely unpredictable situation, it’s all about getting the lads back to performing at the heights we and they know they can achieve.

“It’s similar to getting going again in pre-season, but probably much harsher, because you’ve got a plan at that point,” he told us. “You know the summer weather and you know when the season starts.

“The unknowns, uncertainties, the going to and not doing in terms of games cancelled, etc, that’s been an unknown for us. But, it’s in the past.

“It’s happened, so we move on from that point. It will become a story within 10 years of what happened in the 20/21 season but, right now, we’re living it out. It’s not time to tell the story, it’s just time to concentrate on the next opponent.

“We’ve got 22 games left, and I’ve got my own personal targets in terms of what I’d like us to achieve in those 22 games, and we’re still capable of that. It’s far too early to look into things too deeply and reflect on anything.

“We’re over half way through February and usually we’d be two thirds of the way through the season, but we’ve only just passed half way in terms of games played. Our next 22 games will be fast and furious, and we’ll just try to get what we want from those games.

“We do say that players prefer playing to training, and they might prefer it, but it’s all about what happens at that time. If you don’t get what you want, you’d probably change your mind and say you prefer to train and have a week gap.

“If you play twice a week and get on a good run of wins, you’d prefer to be doing that. That’s just the way it is, we can make it sound positive or negative, but you can always make it fit what you want, just like a stat.

“In reality, in football winning is vital. We’ve got 22 chances to try and win games and that’s all that really matters.”