As another transfer window draws to a close (11pm tonight) manager Chris Beech spoke to us about his current squad, and the importance to get the balance right between numbers and opportunities to play games. 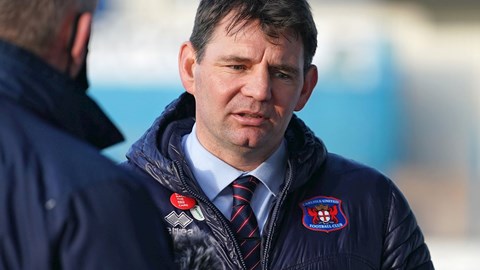 MANAGER: We dug in, and that's the most pleasing factor

“I’m still speaking to a few players but, as you can see, we’ve got some very good players not getting changed at the moment,” he said.

“What I don’t want is to turn the good attitude and ethics we have into situations of frustration and disgruntlement.

“It’s very difficult as a football player not to play football and still support the three points, to the attitudes and ethics I demand.

“If anybody doesn’t do that they’ll know about it and they’ll leave. What I want is not too many players, because it creates a negativity, but a group who know they’re all important and who will step in and step up when they’re asked to.”

“We’ve had that this season,” he continued. “As we said on Saturday, the substitutes knew they were as important as the starting eleven, because the circumstances we’ve faced have been fairly unique.

“I need everybody to be hungry and to be fighting for the same thing. If we do bring anyone in, or if we let anyone go, it will be for the right reasons for them and the club.

“We’re comfortable, we have the right qualities and temperaments in our dressing room and we don’t want to upset that. If anything we want to develop and grow it, and everything we do has to be with that in mind.”