A more advanced role for midfielder Jon Mellish brought a goal before half time on Saturday as he took his tally to three for three for the season with a close-range finish. 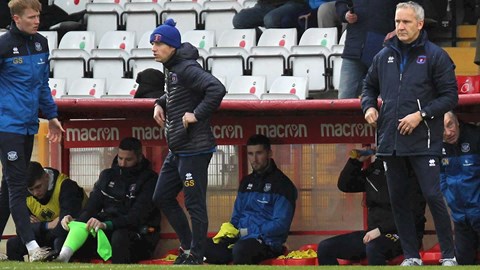 When asked after the game if it was something he’d consider doing again, manager Keith Millen said: “We win and he scores one of the goals, so it probably looks like a good decision.

“It’s an option for us, isn’t it, but I’m not saying we’ll do that every game. I’m just trying to think of ways to score more goals.

“I’ve got other players to try other things, and my plan was to try and maybe put two forwards on to freshen it up, give us more legs, but it wasn’t that type of game, it was more of a physical battle.

“The changes we made worked, and I’m not sure I’d pat myself for that, but I pat the players on the back for making it work. I just felt after Tuesday that I needed to be the one who came up with something a little bit different. 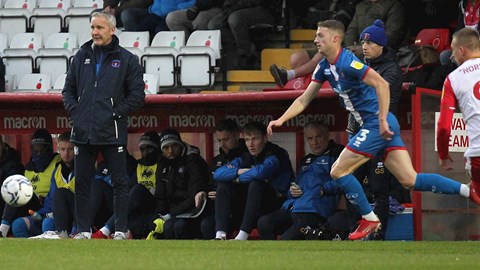 MANAGER: It came down to the key moments again

“We did it and it came together, and we’re pleased with that. As I’ve already said, it was a team selection that was more about the size of our players.

“Tristan and Brad have worked so hard, they take real credit for that, but they’re a different type of player. They can run, they’re nippy, but I didn’t think this was a game for that. It was more about competing and the bigger physical presence did that really well for us.”

Also up front for only his second league start was teenager Sam Fishburn, and ever-willing runner.

“It’s amazing for such a young lad,” he commented. “He’s up against two big centre halves and I just felt that at Mansfield we hadn’t looked after the ball up front as well as we should have.

“Sam didn’t always hold it up, but he didn’t allow the defenders to get any of those big headers that put the ball back on us, and there was a lot dropping down that allowed Jon to come alive.

“For a lad of his age to last like he did, he’s got a bright future. All of the players worked hard and it’s a busy period coming up, so we’ll get the balance and keep going in a positive mindset.”