The Blues host Rochdale tomorrow afternoon [kick off 1pm] with Dale coming into the fixture off the back of a confidence boosting victory over Newport last weekend. 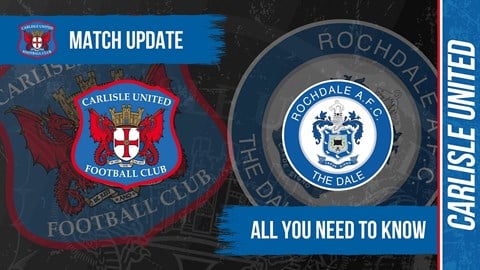 Looking ahead to the Boxing Day fixture, manager Keith Millen said: “I think it will be a good football game.

“I’ve watched their games, they play with three at the back and they’ve got good footballers in their side.

“They play with a front three who combine, so on our big pitch I think we’ll hopefully see a bit more of a football game.

“Both teams want to play in a slightly different way so we’ve worked on what they do, but we also keep focussing on our identity.”

“It was two weeks ago but I was pleased with the way we won our last game against Stevenage,” he continued. “It wasn’t the prettiest of games but it pleased me. 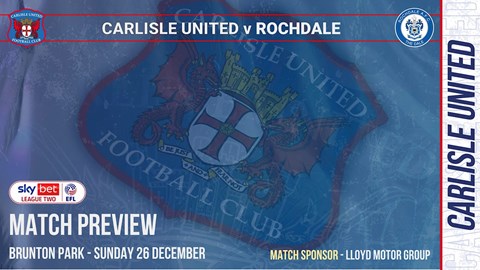 “If we have to play like that to win, we know we can, but hopefully in a home game on our pitch we can get our game going. I think you’ll see two teams who are trying to play.

“I think they’re more of an attacking team than defensive team, when you look at them. They like to have possession, they’ve got players that can handle the ball, they’ve got Beesley up front, and two Number 10s either side.

“For us it’s getting that balance of dealing with what they’re doing, but when you look at their record, they’ve conceded goals.

“I’d like to think that we can dictate the game and impose our way of playing, because we’re at home. That’s what I’d like to see us do.

“We’re in good shape on the back of a win, and they are as well after a good win after a poor run. Both teams will be going into it quite confident and I’m expecting a good game. Hopefully our way of playing will be the stronger way.” INTERVIEW: Games coming thick and fast is how we like it

And, of course, it’s a final home game of the year before a run of three away trips kick in.

“I’d love us to have a really big crowd here, cheering the players on, because that’s why people love Boxing Day fixtures,” he commented. “It’s part of Christmas.

“It’s a chance to get out of the house after eating all day, get some fresh air and hopefully come to enjoy the occasion.

“I’d love it to be like that because it definitely helps the players to have that sort of atmosphere. Hopefully everyone’s in good spirits coming to the game and can enjoy it.”

“It’s an interesting set of fixtures, and I tend to look at blocks of games as in the workload, rather than who they are,” he concluded. “We’ve looked at how many games we’ve got coming up now, and we’re still trying to organise a couple of fixtures for January that have been cancelled.

“The EFL want us to get the games played as soon as possible because there’s probably going to be a backlog of games.

“I tend to look at blocks in terms of working out how we’re going to train, the preparation and travel, rather than the opposition.

“I don’t concern myself too much with who they are, it’s more about how many games we’ve got over that sort of period.”