We caught up with assistant manager Gav Skelton ahead of the Saturday morning training session to talk about the weekend postponement, and how it had changed the schedule at the start of what is a busy period.

“It is what it is, but it is frustrating after what was a good performance last weekend,” he said. “We were keen to play today against Bradford, but it’s out our hands.

“There’s nothing we can do about it so we’ll make the best of training and crack on with it.

“With the amount of cases we’re seeing on the news we can see covid is spreading like wildfire, which is a concern.

“Everyone is doing what they can, but it’s getting into clubs and there’s only so much you can do. You’ve just got to be as sensible and careful as you can be.”

The news that the Saturday fixture had been postponed came through when the Friday training session was in full swing, with the assistant manager called away from the pitch by the club secretary to be given the unwanted update.

“Like I say, it was very frustrating to hear it,” he confirmed. “You have a natural build-up during the week towards a game and it deflates you when you find out there isn’t going to be one. 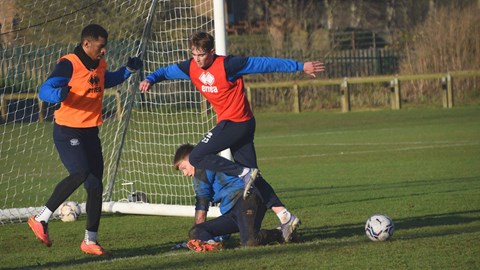 “It’s what you’ve been preparing for, but we altered the training plans for the day immediately and it changed things for today, but the bigger picture is that we have to deal with the covid situation, get on with it, not moan about it and keep people as safe as possible.

“I think it’s pointless thinking about what happened with this last season. You can start turning yourself round in circles if you do.

“It didn’t help last season, but the important thing is the health situation for everybody.”

Having received notification of the call-off, the coaching staff decided to leave passing that on to the players until well into the Friday session.

“That was deliberate,” he revealed. “They’re athletes, professional sportsmen, and they’re geared towards and looking forward to the game.

“They’d had a good win last week and they wanted to carry that on, and naturally it’s hard to go from that to suddenly being told it’s off.

“Some deal with it better than others, some are visibly disappointed and frustrated, but it is what it is. It allowed us to train a bit more than we would normally train on a Friday, and it meant we could plan another good session for this morning.”

“It’s a busy period coming up so that’s where your focus goes straight away,” he added. “Another frustrating factor is that it’ll be 13 or 14 days since we last played once we get to Boxing Day but, again, we just deal with it.

“All roads lead to Rochdale at home at the moment and hopefully the game will go ahead. The schedule for next week was already planned and that won’t change because other than the real-life match practice we won’t get against Bradford, we’ll still get the fitness work we need.

“You can do all the preparation and talking you want but there’s nothing like being out there and winning games. We saw that last weekend, it made us feel better and confidence is a big word, but you get that from winning games.

“Again, that’s all about self-esteem and human nature. We could see in training this week that the lads were buoyant, they were focused on the job and ready for a game today.”

“We’re all looking forward to the festive fixtures now,” he concluded. “I think it’s good, because the problems you get with the weather and the training pitches are well documented, so the run of games is busy, but it’s also exciting.

“That’s as much the same for us as it is for the fans. You don’t have loads of time to prepare for each game but if you string a couple of result together it doesn’t half spring you up the league table, which we’re desperate to do.”