Carlisle United Football Club are delighted to announce a new partnership with Her Game Too, which aims to raise awareness of sexist abuse within the realms of football. 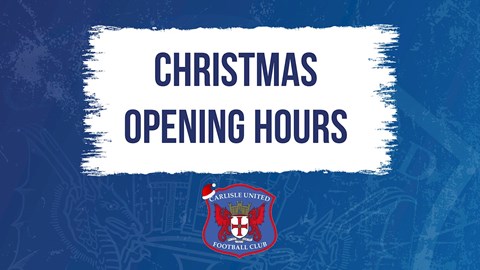 The campaign was launched in May 2021 to widespread support on social media - leading to the campaign's hashtag of #HerGameToo trending on Twitter in the build-up to the Emirates FA Cup final and launch video for the campaign gaining over one million views.

Since the campaign's launch, #HerGameToo has surveyed approximately 400 female football fans to build a wider picture of the experiences they have faced when attending games.

Sexist abuse or harassment will not be tolerated by Carlisle Unitedand by working closely with the #HerGameToo campaign we hope to create a safe environment at Brunton Park for all supporters.

In the future, Her Game Too are looking into methods people can report sexist abuse or harassment and they will continue to reach out to female fans to evaluate the current match-day experience and make appropriate changes, which Carlisle United will fully support.

Chief executive Nigel Clibbens said: "We are delighted to support Her Game Too. We are working on a number of initiatives with our supporter groups [as part of CUSG] and this is the latest.

"This is another demonstration that club is committed to making Brunton Park as welcoming and safe for everyone as it can be. For those already with football in their blood and part of their life, we take this for granted.

"The Fan Led Review highlighted the important work clubs can do and need to do to make the game welcoming, open and inclusive for everyone."

#HerGameToo founder Caz May said: "We are delighted to have Carlisle United on board with the Her Game Too campaign.

"It's so important to have the backing of professional football clubs, so we can build a safe space for females involved in football across the country. We look forward to working with them to tackle sexism in the game and improve the overall atmosphere to make it more inclusive for all."

CUFC Supporter Liaison Officer Simon Clarkson added: “We want women and girls of all ages to feel confident to attend matches, both home and away. Please contact me at 07891 779 015 or email slo@carlisleunited.co.uk to discreetly report discrimination issues at the stadium."

Nigel Davidson, EDI Officer with CUSG, said: "It’s a wonderful initiative to help make football grounds a safe and welcoming place for women and girls, as well as helping to stamp out sexism in football.

"#HerGameToo will help to bring through the next generation of Carlisle United supporting women and girls.

"Hopefully soon we will have a women and girls representative on CUSG who will be able to work with myself on a number of EDI Initiatives on those specific issues.

"Recently we had a large number of women and girls at the Walsall game, visiting us for the first time. They attended in a group, which made them feel safe, as many would not have attended on their own.

"After the game they were so excited to come to another game and many now feel confident enough to do that in their family groups going forward, which is amazing for them, the club and the initiative.

"Hopefully #HerGameToo will play a part in more fans coming to the football."