A game of few chances went the way of Hartlepool on Saturday afternoon and manager Chris Beech was very honest in his post-match review of the game as he talked about a below par performance that had led to the first league defeat of the campaign. 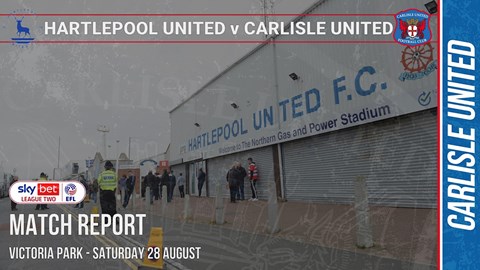 “I thought it was a disappointing performance and not one we’ve come to expect,” he said. “We didn’t get going but if you look at the game, all of it, Hartlepool didn’t really have many chances either.

“I think it was a pretty poor game. They’ll be happier that they’ve got the three points but the game itself was pretty poor. But you have to concentrate on your own team.

“We lost too many headers and tackles, without really looking like we were being overrun. I can’t criticise players and say they’re not trying. It was huffing and puffing but not good enough.”

“From both teams, there was a lot of work with no end result,” he added. “I don’t think Magnus made any saves, and their goalkeeper didn’t.

“It was a game devoid of real control from either team. Don’t get me wrong, the stats may say otherwise in terms of possession, but it’s basically a goal kick, and from that point there wasn’t much happening against us.

“And on the turnovers we didn’t see us forcing our good play as we would normally expect to see. I was disappointed with that.”

On the lack of creativity in the final third, he told us: “You need more players winning headers, tackles, and keeping composure while playing at great intensity.

“We didn’t have any of that, we were in between. That’s what you need to push on and we didn’t have it. We have to be honest about that, there’s no good denying it.

“Even at half time I said to the lads that we were nowhere near who we are. I told them to represent who we are in the way we always do and there was a great opportunity in front of us. We didn’t do it and we have to face up to that.”

Both goals conceded on the day had that feeling that they were preventable, coming at stages in the pattern of play when United looked like they had things under control.

“We know we’re better than that with both situations and we didn’t get anywhere near to doing what we know we can do to stop it from happening,” he confirmed.

“Both goals were so avoidable. We needed a cleaner contact and reaction for the first one and better decision making for the second. The lad has had a speculative shot and it’s gone in, but they haven’t had much else on target and, of course, neither did we.

“Results are what matter, so it doesn’t matter what I say at this point, but there are things we will look at because that isn’t good enough. Without being too critical George had a free header, not under pressure, and he didn’t do enough for the lad to skip past him.

“The lad on loan does well with the finish but we’ve let it get to that point. Our goal had a little bit of composure but in retrospect there wasn’t much else that went on with that type of quality.

“With Zach’s equaliser we certainly felt comfortable in that match and even their goal was a throw-in, headed out and it’s a speculative effort. He struck it well, and often these games are decided by moments like that.

“From there and throughout, to be fair, we didn’t play with enough intensity and didn’t therefore put our opponent on the back foot enough. 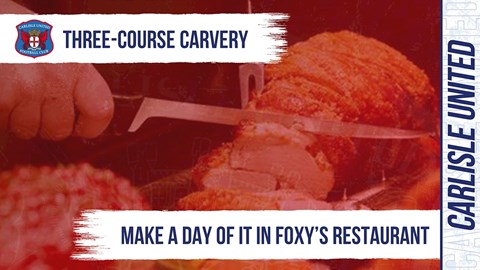 “To do well in this league we need to be good with and without the ball. We had our brilliant support behind the goal to try and support us to achieve things on the pitch, but we looked like if we carried on playing I don’t think too much would have changed.

“Everybody looked half a yard short, not quite right, and that for me is what I’m disappointed about. It’s something I’ve not been used to seeing in front of me, so we need to be better.

“We know we’ve got lots of opportunity in front of us, but we must be better with our individual battles and with what we do as a team if we’re going to get what we want.

“It’s a strange one because I generally don’t feel like this. Even in defeat we’ll show great traits, but in this game we didn’t.”

The change of formation for the game brought first league starts for Zach Clough and Morgan Feeney, with the Blues going like for like out on the pitch.

“We’ve got to be varied during the season and we have to be able to adapt as necessary,” the manager explained. “It allowed us to play two strikers in an away game, and what we were after was looking at respecting your opponent, but ultimately trying to make sure we imposed ourselves. 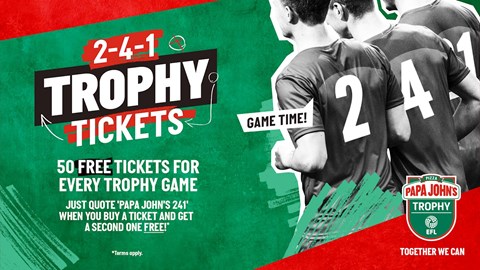 “The shape matched the other team, so we should have seen better. There are individual battles all over the pitch and you have to win them. We lost the game because we didn’t win enough of those. I’m not saying they bullied us, they didn’t.

“We just thought the actual spectacle of the game was pretty poor. We can help that by being better. I didn’t really see a clean header or a specific decent pass.

“Some good interplay created the goal, but we’ve got to be more intense with everything we’re doing. The lads know that. Whether they’re driving with the ball, passing, taking a player on, supporting each other, getting the ball back, that’s what we are.

“We worked really hard to be like that and it takes a lot of hard work to be like that. When it’s not quite like that, thankfully I haven’t had many performances where I didn’t enjoy seeing what I saw, and I don’t want too many more.”

“Football does this, but we were actually looking to get Lewi and Brennan on when it was still 1-1,” he continued. “They scored as I was talking to Gav, so we thought we’d get another attacker on.

“We’ve gone making changes to go and try to get three points to making them because we’ve just gone behind.

“We’ve conceded twice in a game that’s had the least amount of pressure on our goal. Again, this is football. They haven’t got through us much at all, but they’ve scored twice. We have to be better and we know we are.

“I want more than this from the group and they want more from themselves. That’s why I have to be open and say that it simply wasn’t good enough.

“The fans know it as well. They were superb, and t the end they showed their disgruntlement to the players. I’m quite happy that takes place.

“I’m open and honest to look at myself to say, yeah, brilliant support, we thank them for coming, and one hundred percent stick with us, but I understand and the players understand there’s more to give, and they’ve not given enough.”