United’s away victory at Swindon came despite what can only be described as a journey of Friday 13th proportions as a series of road closures led to a cancellation of training, a quick rethink of the pick-up arrangements and an arrival at the team hotel following a testing 10-hour trip which had taken the bus onto minor roads in its quest to find a way through the congestion. 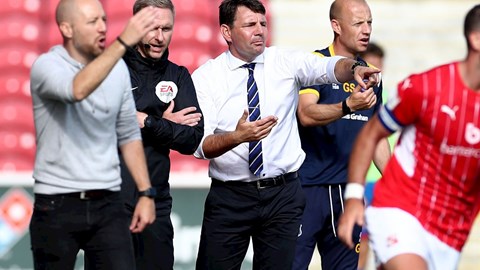 MANAGER: We added a bit of control

“The lads ended up having a good 10 hours on the bus, and we couldn’t even train yesterday at Blackburn Rovers because of the travel issues,” manager Chris Beech explained. “We thank them for saying we could use their pitches, but we couldn’t even get off the M6 at the Tickled Trout because all of the rat runs around that area were clogged up.

“Some of the lads had met there, so they decided to crack on because at that point it was saying six hours to Swindon, but it actually got worse.

“There were fatalities in the accident that caused it, which isn’t nice to hear, and that’s the important thing that had to be dealt with. Four our part we had to do our best to get to the hotel and we can commend the lads for how they handled all of that.” 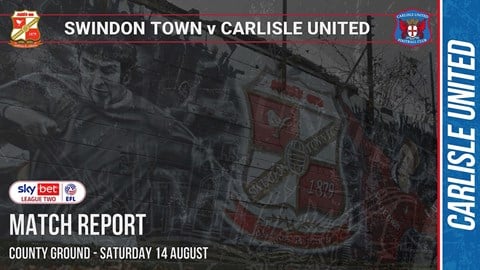 “The plan for me is that I was going to jump on at Stobarts, at junction 15 of the M6, but they couldn’t get back on the motorway to meet me there,” he added. “They were 30 minutes ahead of me from the Tickled Trout way, but I ended up 90 minutes in front of them, and the driver needed his 45-minute break for his tachograph, which they had to factor in.

“It took me a good six or seven hours, so it wasn’t too bad because I had a nice hot bath and thought about the game. We did a bit of pre-activation on Saturday morning, which is a posh word for Pilates, and then we turned the button on when we got to the ground.

“It wasn’t great, but it is what it is, and all you can do is get on with whatever is thrown at you and concentrate on winning the game, which is what we did.” 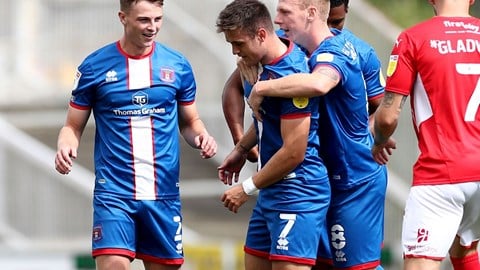 And with an update on Zach Clough, who missed the trip down south at the weekend, he said: “He’s done 5 kilometres today [Saturday] so he’s back at it.

“It’ll be interesting to see where he is on Sunday or Monday, because he’s an important player for us. He’s pushed himself a bit so we’re waiting to see how that’s gone.”

Also on the agenda was the potential for new arrivals, with the summer window open for another fortnight.

“The plate that’s spinning has nearly stopped and it’s about to fall off, and that’s when I can tell you all about it,” he revealed. “He hasn’t quite signed on the dotted line so if that happens we can share it.

“If it doesn’t happen then what I’ve just said stitches me up, and everyone asks what I was on about. That can happen, but we’ll wait and see.”