United came away from Rodney Parade on Tuesday feeling pleased with the performance – but also with a slight sense of frustration having created the better of the chances and having held the upper hand for most of the game. 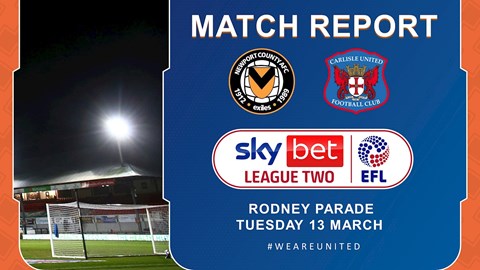 Speaking about the entertaining 0-0 draw after full-time, manager Chris Beech said: “The lads deserved the three points, they did. We didn’t get them, but we definitely pushed for them.

“I was really pleased with the efforts, including the substitutes. It’s difficult for me to change things because they’re playing so well, but I did want to try and roll the ball over the line. Ozzy has been great and you just have to gamble on trying to think who’ll score the goal.

“That’s no big thing on Ozzy there, he’s been fantastic, he really has, we just didn’t quite get our goal in this one. In fact, I’m not too sure what was wrong with Ozzy’s goal that he did get.

“He didn’t touch the goalkeeper, the ball was there to head, and he headed it. Whether he had hands on him prior to contact, I’ve not seen.”

“We did have some big moments though,” he agreed. “Although you might point the finger at Rod McDonald for missing his header, I was right behind it. His body was in some sort of contorted way.

“He actually did really well to get in front of the man and head it. Half our bench were thinking it may even be a penalty, as he was getting pushed so much before the ball came in. He did well to get first contact.

“I’ve been challenging him to run more, sprint faster and get first contact on set plays. If he does those things and plays like he did tonight, excellent.

“And we had Omari Patrick really trying to work their defenders. In the first half Danny Devine had space in front at the far end, and he was coming to feet. I told him at half time to spin a bit more, so the full back doesn’t always know you’re coming to feet.

“He did different variations. He had a full back on his back foot, so he could be ascendant in his play, as he was. He still could have got more, but I was pleased with his attacking threat. Working off him we had Ozzy’s and Lewis’s intelligence. 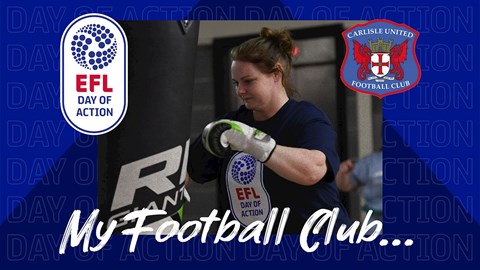 EFL DAY OF ACTION: The importance of clubs to their communities

“Lewi is vital in helping us to stop the opponent from playing. He did that well because Newport are renowned for being one of the most possession-based teams. We had plenty of prominent possession in this game, so I was really pleased, but disappointed that we didn’t turn it into three points.

“We nearly did with that cross from Omari which might have taken a nick to put it through Ozzy’s legs, instead of him just finishing it off. That was another of those moments that just didn’t go for us.”

It was one of those nights when the team needed to go toe-to-toe with a very tough opponent, and they didn’t disappoint.

“If you speak to their manager he’ll probably feel a lot better than I do because he’s been on the back end and managed to keep a gap,” he told us. “I’m just pleased with how we’ve performed. If we perform like that it’ll make the remaining six games very interesting.

“However, what we must do is concentrate on the next one and not look any further ahead than that. It’s about Saturday, the other five don’t matter until it’s time to play each one of them.

“It’s another clean sheet, which we have to be happy with. Both Aaron and Rod were very clean and efficient in how they handled a good attack. But, I will say this, they stepped back and had a little look in those first two or three minutes of the game.

“That was a concern, but they quickly sorted that out and for the next 95 minutes they really gave them nothing. Maynard had a couple of shots from 25-30 yards, but that was it, so defensively we were very strong.

“Unfortunately we didn’t get what we deserved off the back of it, and that’s why we need to remind ourselves how important it is to play to these levels all the time. 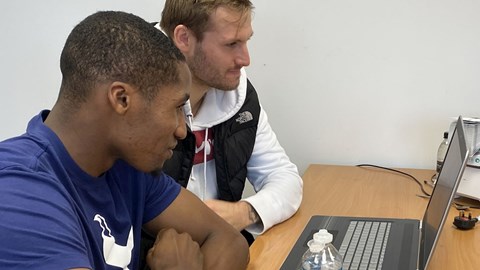 “At Barrow on Saturday we went in front, and if we play like we did at Newport we win. On Tuesday night we didn’t get in front but it was a really strong display.

“It’s always in your head when you haven’t scored that they are very good at attacking set plays, corners and throws. You can always concede from those if you aren’t careful.

“When they bring big Kev Ellison on, that means they have a lot of players over six foot. It was important I kept 11 players on, especially with the way they work the referee.

“It only takes a little wrong-doing with Jon Mellish on a yellow and he’s off, and we are then struggling with a man down. I’d have to maybe bring Lewis off and put a player on who is tall to deal with those set plays, because that’s where 30 to 40% of goals come from at this level.

“That was why I took Jon off, to protect us from that second yellow situation, and I thought Nick went on and did well. Labadie plays in the middle, Nick came on and won his headers, he didn’t do anything different to what Jon was doing, but is in a better position not to be sent off, and therefore be there to deal with the remaining set plays they threw in.”

On the overall performance, he said: “I thought we started better than them, and the middle bit from us was better than them. I thought as we looked and searched for a winner it opened out a little bit.

“However, we protected the goal and that just comes down to good, basic defending. Newport will be pleased because they’ve come away from a game where they’ve been tested with a point.

“I’m really pleased with the lads. Like I keep saying, we went through turmoil after Christmas and to recover like we have, I have no doubt again our stats will be back to what I would consider normal.

“That’s because we were better, stronger, quicker, and we played more football. That’s four points we’ve taken off Newport, and we’ve done that to a few teams. We’ll look to attack the next game in the same way and let’s see if we can make our excellent home record look even better.”