United’s penultimate home game of the season is the first ever visit to Brunton Park of Harrogate Town tomorrow, and manager Chris Beech confirmed that he’s expecting another tough battle against a side that has settled well on its first foray into the ranks of the EFL. 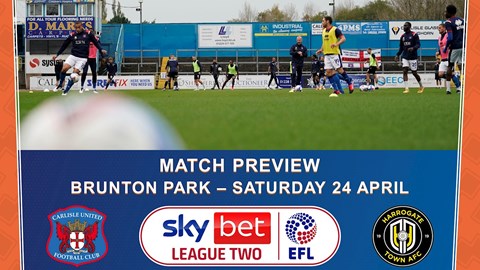 “We’ll be coming up against a very hard-working team, that’s for sure,” he said. “They’ve picked up some excellent results and there’ll be no sense of them taking the foot off the gas.

“They have nine points still to play for and they’ll want to finish as high as possible. We saw when we played them at their place that they have players who can build up pressure and we’ll have to be on our game to stop them from doing that.

“We know their threats, we know how good they are at doing what they do, and they’ll want to put all of that into practice. I know I keep saying this but it’s about us and what we do, and about how we go about applying the traits that give us the ability to take the points we want.”

“As we said the other night, we’re basically in a position where we can’t really make any big mistakes in terms of picking up points,” he added. “It’s funny really, you can make mistakes within the performance and still end up winning.

“I think it’s all about getting the points now rather than performance. We know the target, we know it’s a big task and that it’s harder than we would have liked, but it’s still there. It’ll only still be there if we get those three points, so that’s what we’ll be trying our best to do.”