The Blues are in South Wales tonight as they head to Rodney Parade to face fellow play-off hopefuls Newport County. 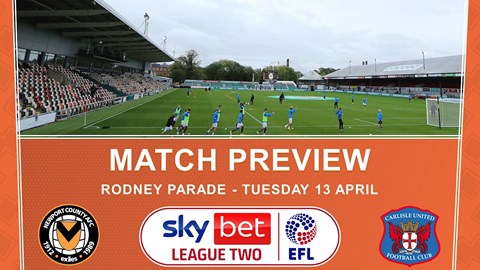 Looking ahead to the game, manager Chris Beech said: “It’ll be a tough one for us. They’ve got good players, they’re strong down the spine, and they try and play a bit of football.

“They’re in a similar position to us in that they’ve got something to try and achieve, and they’re going to try to achieve it.

“It’s two teams who are up there and that’s alright, isn’t it. It’s better than being at the other end, we were in a position like that when I walked in the door.

“We’ve got to embrace our opportunity, not fear it, and if we don’t get what we want from it on Tuesday it’s not finished, but at the same part I know what we need to do to try and get what I’d like us all to get, which is a positive situation at the end of the season.

“That’s why we have to go into the game feeling positive, refreshed and ready to go.”

“Both teams will want to win it, but there are no guarantees for either of us,” he added. “We can win well, if we play how we know we can, but we can quite easily lose too.

“We have to make sure we’re right and give our all for it. As I’ve already said, if it doesn’t go to plan it doesn’t mean to say everything’s sorted. It’s one of seven opportunities and I know what we need to do in those seven games.

“We have to try and do it as fast as possible, but if it doesn’t happen Tuesday, it might happen in the following game. We’ll work hard, we’ll look hard at what Newport are good at.

“Our analyst Jacob went to Mansfield on Friday to watch Newport play so we’ve seen them first hand. It’s going to be tough, but we’ll give our best playing against a really good team.”

As big a talking point as the good football that comes out of Rodney Parade is the state of the pitch, which reached such a point recently that two home fixtures had to be played in nearby Cardiff.

“I don’t know the ins and outs of the situation but I believe they hire it out to rugby,” he commented. “The pitch is a discrepance, but it is what it is.

“I remember at Rochdale when we had problems before playing Spurs in the FA Cup. To look at the pitch, it was horrific. I remember when Grant Holt came and played for us, it actually helped him because it was flat and full of sand.

“The ball was dead on it, but it never bobbled, and that meant players could use the ball with more assurance. It was a strange situation and, looking at it from afar, the pitch at Newport is similar.

“It’s the same for them as it is for us. They play a lot of good football, and I have a lot of respect for their manager. Flynny is hard-working and he’ll be wanting the best for his team.

“He’ll have asked the question a few weeks ago and they got supported in being allowed to play at Cardiff. I do remember in our situation where we lost 10 games to postponements, we did try our best to get more covers than the ones we already had.

“I remember the chairman ringing to say we’ll try and get some in, but once it’s in the ground at that low level of temperature you can’t get it out. We looked at enhanced covers and all sorts, and we did talk about playing somewhere else.

“There was Blackburn and Preston who played on Friday nights, so nearby facilities were available, it just didn’t go anywhere for us. That’s what it is as well, it was a completely different situation for us, and it’s been and gone.

“It’s about the games we have left now, starting with this one on Tuesday night.”