Next up for the Blues is tomorrow’s away game at Southend, a club looking to pick up points quickly as they battle against the threat of relegation. 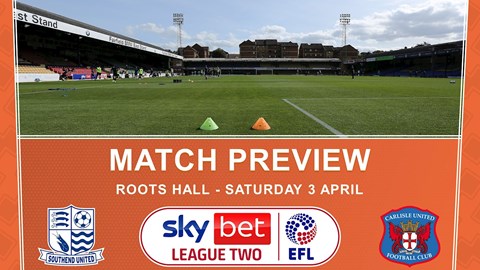 Speaking about the game, Chris Beech said: “There’s no easy ride in League Two and Southend are proving to be a hard team to beat at the moment.

“You’d expect that because they’re fighting for their lives. The players are battling hard for their manager and he’s put together a good mix after the January window.

“It’s been a tough year for them, but they’re trying to put that behind them. I have absolutely no doubt that we’ll need to be on it, because they have worked hard at making sure they don’t concede goals.”

“This division is a really strange one with the way things have gone,” he continued. “It doesn’t make any sense because you can’t say that any one team will definitely win at any time.

“You saw us play better than Cambridge and get beat, and I don’t think we’ve won a game this season where we don’t deserve to win.

“But you’ve seen teams here that are quite dogged. Grimsby, I know we got some negative press from the Grimsby fixture, but you can see from their results after playing us, they are also running hard for their manager and they have some real big players in that squad.

“Southend are very similar. They’re picking up results and they’re finding ways to give the opposition a test.

“That’s why we need to look again to repeat the traits we’ve shown and try to earn another three points. We know about our home record, that’s something we can be pleased with, but the away record hasn’t stood up to that.

“We need to look at that and try to balance it out a little bit, and we still have 10 opportunities both home and away to pick up more wins. That’s what our focus is on.”