Football doesn’t always give you what you deserve and Tuesday night at the University of Bolton Stadium provided another example of that for the Blues as they largely dominated a game that ultimately yielded nothing in their favour come the full-time whistle. 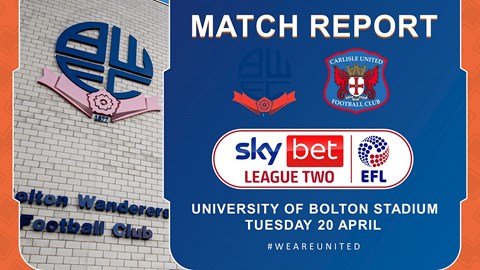 MATCH REPORT: From the Bolton away game

Speaking about the game, boss Chris Beech said: “We’ve just been talking in the dressing amongst the staff about the fine margins.

“They hit the post, it comes back to a lively striker in terms of having killer instinct and he scores a goal, but when we hit the post it goes behind for a goal kick. That’s just how it goes sometimes.

“To be fair to Eoin Doyle, we kept him pretty quiet but that’s what they get the big bucks for, to be different from everybody else. That’s what he is at this level, he managed to stay on side and score the rebound.

“We could have got closer to stop the initial shot, we didn’t, and it’s gone back to Doyley who is at a club like this because of what he is and what he can do. You could argue that some of our players had much more prominence in the game, but they didn’t have the impact he did because he scored the decisive goal.

“I’m very proud of how we’ve tried to go against that and I am disappointed that we haven’t got a goal to represent those efforts.”

“We started better than Bolton, but they had a real good period of 10 or 15 minutes, just before they scored and just after it,” he added. “We did dominate the rest of it but we allowed them to have that spell.

“I wanted us to change our shape to try to tighten up the middle area through that, and I was disappointed with how we allowed them to play out at that point. We reacted, and at half time I had an opportunity to talk to the players and to make them understand what we needed to do, and they took that on board.

BLUES STORE: Back to normal next week

“We did put Bolton on the back foot but we just couldn’t turn the good moments and periods of play into the goal we wanted. Jack Armer found some lovely crosses and Lewi had a chance at the back post where it hit his thigh and he just couldn’t finish it.

“There were things happening which were good, but we didn’t manage to turn it into a decisive moment. I’ve just talked to the lads and I told them that they’ve been brilliant, but that by no means is it finished yet.

“The players agree with that. You could see how much it meant to them to try to get something because they kept pushing and pushing. I haven’t looked but our shot count and corner count will be high.

“But, as ever, the only stat that matters is goals. They got one and we didn’t. They have quality players, and players that if you give them an extra yard can make intelligent football decisions.

“We allowed them that time and extra touch during the spell when they were on top, but when we dominated they showed other qualities to stop us scoring. Their centre-halves stood up and said, no, we’re not going to let you score. We got close, but there just wasn’t that clear-cut chance.”

And looking closer at the move which led to the goal, he commented: “I’ve spoken to the players about that because it’s part of the whole process of learning and progressing. It’s not youth development, it’s about winning.

“There’s a lot of learning going on but we’ve got to learn real quick. I’ve just shared that with the players, because the goals comes from a centre forward who wants to be on the end of chances. That’s why he’s been so successful.

“I feel in the game we’ve got players who performed better that he did overall, but he’s a match winner. There’s a reason why he’s regularly doing that. But the build up, yes, it comes from a little bit of that period where they were allowed – by us – to take the extra touch.

“If we’d got tighter, if we’d stayed higher, and if we’d condensed the space it wouldn’t have been allowed to develop that way. We weren’t playing the way I like us to play in that spell, because if we did they wouldn’t have scored.”

The celebrations from the home contingent come the final whistle was perhaps the biggest indicator as to how well the away team had played.

“However it’s described I’m very proud of how the players played, their energy, they were committed, but you do need something to break for you in games like this.

“JJ was inches from touching that cross-shot in and Lewi Alessandra was ready to shoot if the ball had sat up properly off Jack’s cross. Often people talk about a break of a ball. You need somebody to come out of the situation to say, here we are, here I am, man of the moment. It didn’t quite happen.

“Nick when he first came on had a great strike, the boy’s hands down by his sides, you can argue handball or not, when you come to venues like this it’s very difficult to get that support, especially with no crowd. But I was really pleased with how the players performed.

“I owe it to our club and supporters to try our best to achieve things. We are way apart in terms of the difference in what gets supported to put that squad together compared with ours, but that doesn’t stop us from trying to gain an advantage.

“We want to be successful here and we’ve recruited players who can match anyone. That’s a credit to everybody.”