Defender Rhys Bennett returned after an eight-game injury enforced absence on Saturday afternoon when he took his place at the heart of the defence for the second half of the home game against Harrogate. 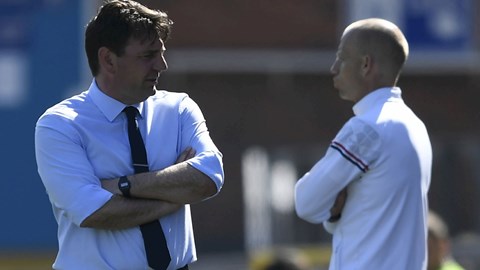 MANAGER: We picked up but ultimately didn't do enough

Speaking about his central defender completing an earlier than expected return to the fold, manager Chris Beech said: “It’s pretty commendable isn’t it, especially when you’re contract’s going up.

“He’d hardly trained at all but he was able to come on and support the team like he did. With a couple of lads on bookings we looked at it, and looked at how we could force our way into the match, which we did in the second half.

“Rhys is putting his body on the line and I think that’s out of respect to the relationship he’s got with myself, and what the team means to him as a team member.

“It’s about remaining as a team until we get to that point of closure which, maybe, will be in three games, and maybe not.”

“We also had Ozzy Zanzala coming through his treatment,” he continued. “He trained on Thursday and it’s tough on him to get right back at it, but he was.

“We didn’t have Rod McDonald, he had a dead leg. That isn’t responsive yet, but these things can get better quite quickly, as well as they can sometimes take time.