St George’s Park provided an excellent venue for the Central League Cup final on Wednesday afternoon and a young United side showed effort and commitment in what was a good game to watch. 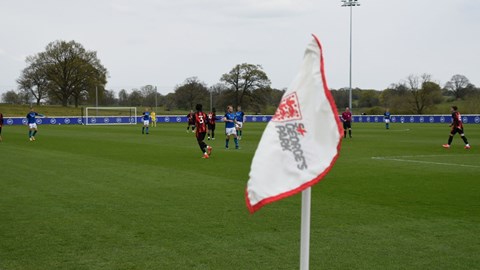 Early goals gave the Cherries the advantage, and it was Bournemouth who took the silverware come the full-time whistle.

Speaking after the game, assistant manager Gav Skelton said: “We are ultimately disappointed to see someone else pick the trophy up, because we were desperate to win it, but I cannot fault their effort.

“I thought the effort and commitment shown by the players was magnificent against a really good Bournemouth side. I don’t want to take anything away from them – they were good, they have really good players, they’ve played together a lot and you could tell that at times.

“The minimum you ask for is effort and pride in the badge and I thought the boys showed that. If I’m honest Bournemouth were always the better and more composed side, but you always felt we were in the game.

“You felt if we got one it might make them have a bit of a wobble, but those are the what ifs and maybes. Overall we’ve gained a lot from the competition and it’s a fantastic experience for everyone. We’re all just disappointed we haven’t won.”

Having watched the Cherries celebrate their success, he told us: “It doesn’t get any easier but the rewards of the feeling Cheltenham had on Tuesday night and Bournemouth had from this game, you get nothing else in life that matches when you achieve something.

“You miss that because nothing replaces that – you remember the good occasions, you go through the hard times and I’m sure the lads will experience some good times if they can learn from things like this.

“It was great for the young boys to travel on the first team coach, experience that, because it’s all part of your development. There were some good performances from the young players. I don’t want to go through who did particularly well because overall the effort was great.

“They’re disappointed they’ve lost but will have enjoyed the occasion once they look back on it. Credit to the youth second years who played because it’s difficult, but they enjoy playing for the club and it was a cup final. They really were a credit to themselves.

“I’m proud of them, I’ve known some of them a long time, proud of their effort and commitment. It is difficult, there’s lots going on for them, they’re young men, but that’s the tough realities of football. Hopefully many of them stay in the game professionally.

“I spoke to all of the lads afterwards because it is difficult. Some of them have been with the club for a long time and their futures are uncertain, until those decisions are made, but they wanted to play. That’s testament to their character.”

And with it being the first time for most of the group to make a visit to the National Football Centre, he spoke about the quality of the facility and the welcome that had been given to both clubs.

“It’s good for the club to play at venues and in games like this,” he agreed. “I was excited about coming, it’s the first time I’ve been here, and I know the young lads have really enjoyed it.

“We’ve been treated really well and it’s been a good occasion because of the way we’ve been looked after. The disappointment we feel is that football is all about winning, and we haven’t got that from this game. Despite that it’s something they’ll never forget, the facilities are first class, and hopefully next time we do this we’ll go home with a trophy.

“You are always disappointed when you lose, but Bournemouth were better than us for the majority of the game, even though we did have our moments. Like I say, if one of those had gone in it would have been interesting.

“The lads wanted to finish the competition on a high but it wasn’t to be. It’s been a busy week for us, with the game the night before and another away game on Friday, so we smiled when he heard that they flew up and stayed overnight at the hotel here as part of their preparation, but they do play well as a unit.

“They deserved the win, we can’t deny that, but with a bit more quality when we had the ball in good areas we could have made it even more of a test. We had some good individual performances, with Gabriel Breeze in goal and young Jack Ellis showed good signs when he came on.

“Gabe did really well, made some important saves and that will have done his confidence the world of good. We spoke to all of the lads about the minimum requirements we needed from the game and I can’t fault the effort, they all gave us that minimum.

“It was an exciting cup final but we just couldn’t get the goal to add that extra edge. We’ve mentioned Gabe but I won’t name individuals who played well because that wouldn’t be fair. They all put in a real shift.

“We’ve seen young players come through and progress at this club recently, and the aspiration is that we will continue to provide a pathway. Occasions like this will only add to the all-round player that these young lads will hopefully become.

“You have to say well done to all of the staff at the academy for the way they’re developing some of the lads who we see make it through to the scholarship, which is where they then get their chance to stake a claim for a professional contract.”

Another real positive from the game was a first 60 minutes in a blue shirt for defender Morgan Feeney, who looked confident and assured as he made his return from injury.

“I think you could tell he’s a good talker, a good organiser, you could see bits of the quality he has,” he commented. “We’re excited for getting him fully fit, hopefully he’ll get a full pre-season under him, if he stays fit, and hopefully he can be a good player for us.

“He’s definitely a leader, I’ve seen that in training the last couple of days, he’s got a voice which is important. It was important he got a game, it gives him confidence. If he works hard off season, gets a full pre-season, he’s got all the calibre and pedigree to be a good player.

“It was always our intention to give him an hour. I asked him – selfishly, you get caught up in the moment – could you stay on the pitch, but I looked at him and he put his hand up. Ross the physio wouldn’t have forgiven me if he’d stayed on and got injured, so it was right for him to do that.”