There were a lot of positives for the Blues to take from their season opener against Fleetwood Town on Tuesday night, with eight of United’s new arrivals making their debuts in what was a very entertaining affair. 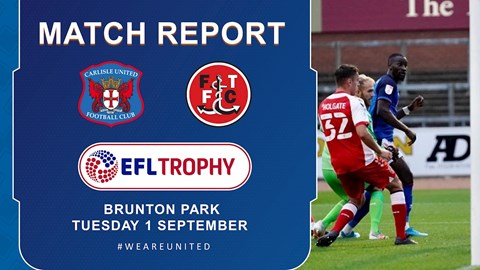 Speaking after the game, boss Chris Beech said: “We’re in sport and we want to win, so we’re disappointed that we didn’t.

“In terms of energy, commitment and honesty it was good. The time you concede goals is important, and I think if we’d got to half time at one up it would have been a completely different team talk in the Fleetwood dressing room.

“I thought we played better in the early part of the second half, but we then ended up conceding two more goals. I was happy with the energy and commitment, but I would like a bit more quality in terms of our passing and getting crosses in.

“We didn’t work their goalkeeper enough, our passing in general was pretty good, but I want to see more goals and more shots on target.”

On the goals conceded, he told us: “There are always lessons to be learned from the goals you concede. The second goal wasn’t great, and it was very similar to one of the goals Colchester scored in one of our later home games here last season.

“It’s a simple inswinging corner and their player had a free header at the back post, and that’s disappointing because we’ve obviously worked on scoring and defending set plays.

“Fleetwood got their tails up after they went in front. Our goal came from a set piece as well, and it happens at all levels of football, so they are vital.

“What we have to remember is that we were playing a very good team that had one foot in the Championship not too long ago. They haven’t had as much time off as us, with being in the play-offs, but I really enjoyed the competitive edge. 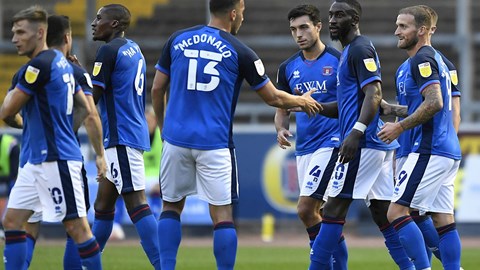 “Of course, you want to win a game, especially when you get in front, so to concede just before half time is disheartening. It happened, and it will happen throughout the season, so we have to look at everything and see what we can do a bit better.”

The opening goal of the night came from Gime Touré, who applied the finishing touch to a well delivered corner from Joe Riley.

“He’s a good lad,” the manager commented. “He’s got to learn the way we play, but he brings different skills that a lot of players don’t have.

“He scored at Wigan as well, so he’s made a big impact in a short space of time. He’s also been doing a lot of extra training to try and catch up. He’ll find his feet, and I’m pleased he got his goal.

“Obviously the night ended on a sour note for him. The red card only applies to this competition, so that is a positive. I haven’t watched it back, but what I did see was him running the ball down and tracking his man, which is everything you want in a footballer.

“He has skills you can’t coach. He’ll twist and turn people inside out and what you need from a player like that is assists and goals. He’s the best finisher we’ve got in the squad so if a chance comes his way he’ll hit the target.

“He didn’t really create enough chaos tonight, so that’s what I want from him. They split and play possession-based football, so when they get their noses in front it gets a little bit easier for them.

“For the incident, he took the ball off one of Fleetwood’s fastest players in Wes Burns, and Wes was professional and his way out of it was to fall over. We’ve got to get better at that, but he only fell over because Gime took the ball off him.

“I haven’t seen it, but it sounds like he’s kicked the grass in frustration because the foul has been given against him when it wasn’t a foul, and he’s clipped the end of the boot of the Fleetwood player on the ground. The referee has deemed it as violent conduct as if he’d just whacked somebody, but he didn’t do that.”

“He’ll be really frustrated because, like I say, what we saw was a winger who is trying to commit to our traits. He had good attacking moments, he got tired towards the end, and in that tiredness he tracked Wes Burns.

“The ref bought the foul and we saw the card come out. I did ask the players, because we want honesty and discipline within the group, and I don’t want games getting away from us where 3-1 becomes four, five and six.

“I was probably one of the furthest away from it but if he’d done it deliberately I wouldn’t be happy at all. When it’s like it was, you just forgive and move on.”

And on the players missing through injury, he told us: “You make a plan when you get out of bed but by the time you get to the game you’ve had to adapt it and try and make it work. We couldn’t quite put it together to get a positive result, but we definitely got it in terms of energy and effort.

“JJ Kayode is a big part of the squad, and we’re hopeful he’ll only be out for a couple of days. Brennan [Dickenson] is going to be a little bit longer, which is unfortunate. He’s all about power and pace so he’ll be a big miss, as is anybody who can’t play.

“Yesterday in training we did a circle and the ball hit JJ on his foot, and it opened up his knee a little bit. He felt uncomfortable after that, so he couldn’t play. That’s me trying to protect them yesterday and a little thing like that happens which completely changes how you want to set up. I dunno, maybe we should have played tiddlywinks or something.

“Omari [Patrick] should be back soon. He trained today but I just thought the game was too soon for him. We’ll get some good training sessions into him, even though that was what we did last time. We want to get plenty of football into him on the training ground so his body is ready.

“Magnus [Norman] has been to see the knee specialist and with us having the game I don’t know what the outcome of that has been yet.

“Jack Armer is back running and training, so that’s more good news, and Josh Dixon has got his last test on his hamstring strength, which supports the knee, and he’s getting really close to being back with us.

“Like I said, they’re all big misses, but that’s why we have a squad. That’s why we need that competitive edge in training, so when these things happen the changes mean we can keep moving forward.”