Four goals in seven games isn’t bad by anyone’s standards, and that’s exactly where Joshua Kayode is with the Blues following his account opener at the weekend.

The Rotherham loanee had just one thing in mind as he watched Gime Toure ghost his way past two challenges before slotting the ball in his direction, and he made no mistake as he swept a beauty of a finish into the bottom corner.

“I knew as soon as I hit it that it was going in,” he confirmed. “I was thinking of going far post, but the keeper moved a little bit and there was some space at the near post, so I just hit it.

“I’ve got to give massive credit to Gime [Toure] for his assist, it was unbelievable. He took on two players and created the space for me to go and score, which I did.

“When Gime has the ball I tend to go to him so he can play me in, but the more I play with him the more I’m starting to realise I should just let him do what he wants!

“We’re all confident that he’ll get past whoever he’s up against, and I think the more we play together the better understanding we’ll get.”

“We do need time to gel,” he continued. “It’s taken a while but it’s a brand-new team with a lot of new faces, and it takes time to understand how everyone plays.

“It feels like we’re starting to get it now and I’m just happy that we’re putting it into practice on the pitch. 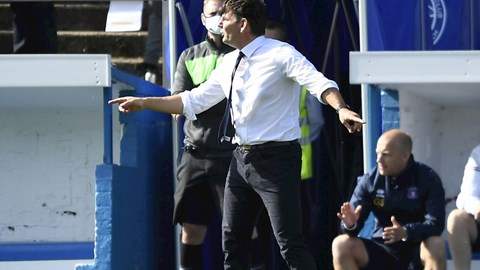 MANAGER: The shape suited the players

“We know we didn’t play well last week but it’s always good to be back on this pitch. Especially having the fans behind us, once we got into the game we relaxed and started to play some good football.

“The gaffer asks a lot from us and it’s up to us as a team to perform and make sure we take what we’ve done in training and use it to get a positive result in the game, which is what we did in this game.”

With his goal having come just three minutes after strike partner Omari Patrick had opened the scoring, it set the team on their way to a comfortable victory and their first three points.

“For Omari’s goal I was actually on the edge of the box, which I shouldn’t have been, but the ball fell to me and I mishit it,” he explained. “Thankfully Omari was there behind me to put it in, but I’ve just been giving him a bit of stick because it took a big deflection, and so did his goal against Newport in our last home game.

“That goal gave us a lift and meant we had that extra drive to go on and try and get another. I’m up and running now, I’m not going to look back from here, I’m going to keep training, keep working hard and hopefully many more goals to come.

“The gaffer is demanding that from me and I want it from myself. I don’t mind how much the gaffer asks of me. It’s hard work but I know it needs to be done in order for me to help the team and for the team to progress up the pitch.

"If we work hard as attacking players then it takes pressure off our defence, as well as trying to force some errors from their defence. It’s all part of being a team. It’s only one win, of course we’re happy with it, but it’s done now and we’ve just got to focus on the next game.

“I feel good and probably better than I’ve ever felt in terms of fitness. I’ll just keep pushing and training hard to try and score more goals for the team to help us win as many games as possible.”

And with fans there to see his goal, he said: “I loved it. I loved being back here and playing in front of some fans.

“It was a good atmosphere even though we could only have a thousand of them in. The fans gave us that extra lift which I think we needed after playing in empty stadiums.

“We want to win for ourselves but at the same time want to win for them as well. They were like a 12th man on the pitch for us, they gave us an extra push. I’m just happy to have some fans back.

“They went home happy and that’s what it’s all about. We knew we had to make it right after the Cambridge game and we gave them some goals and a good performance.

“The pitch was unbelievable, first time playing on it this season, it’s an unbelievable feeling scoring a goal in front of some fans and hearing them cheer again. The front three, we get on well and I think that plays a big factor. We’ve just got to keep it going for the next game.”

Click HERE to watch an interview with Josh Kayode on iFollow United now.

INTERVIEW: I honestly didn’t think Dolly would ever leave


United’s head physio Ross Goodwin joined the club in the summer, taking over from long-serving physio Neil Dalton, and he admitted today that it had been very strange to go through the process of...

INTERVIEW: My eyes lit up as it came towards me


Keeper Paul Farman now has three clean sheets from the last four league games under his belt, and Saturday’s shut-out against Port Vale held particular significance with a second half penalty save...

INTERVIEW: It's given me a real confidence boost


Midfielder Jon Mellish has scored three goals in two games this week, as well as putting pen-to-paper on a new deal, and we caught up with him on Thursday morning to get his reaction to what has been...

INTERVIEW: My eyes lit up as it came towards me


Keeper Paul Farman now has three clean sheets from the last four league games under his belt, and Saturday’s shut-out against Port Vale held particular significance with a second half penalty save...

INTERVIEW: It's given me a real confidence boost


Midfielder Jon Mellish has scored three goals in two games this week, as well as putting pen-to-paper on a new deal, and we caught up with him on Thursday morning to get his reaction to what has been...

INTERVIEW: Clean sheets always give you a chance


Captain Nick Anderton admitted after the game on Saturday that it was important for the team to see the win through, particularly having been reduced to ten men so early in the second half (and with a...