Strength and conditioning coach Greg Short stepped up from the academy department to help out with first team duties when Dave Waldie moved on to Mansfield last month, and such was the smoothness of the transition that he has now been confirmed as the new man to join Chris Beech’s first team staff on a permanent basis.

MANAGER: We are active

The 23-year-old is a Carlisle lad, with an excellent background in the game with his brother currently occupying the same role with Premier League outfit Burnley.

Speaking about the appointment today, manager Chris Beech commented: “He’s a good lad, he’s local and his brother works for Burnley, and he’s been there for a long time.

“The head sports scientist there, Mark Howard, was an apprentice with me at Blackpool and he’s one of the best in the business.

“There’s no way Shaun Dyche would be able to optimise his squad without Mark’s help, so Greg has an inside link to the upper echelons of football.” 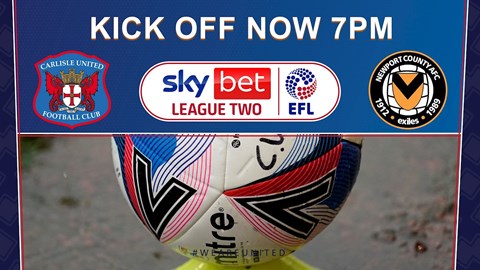 And the added element of living locally, and supporting the club, is something which isn’t to be taken lightly in such an important role.

“He walks to work, so he’s available to help us whenever we need him,” he told us. “While we work very hard to get three points today, we’ve got to look after tomorrow’s as well.

“Because he’s based here he has the availability to help us with that and it means that his use is maximised.

“The good thing is that we know him well. He’s been helping us from the youth system, we’re happy to commit to it, he’s done a very good job and the players have really responded to him.

“Like I say him being local is really good from my perspective. He comes in at the drop of a hat to help with the development of players like Taylor Charters, with his footwork, or Lewi Bell’s strength.

“They’re key elements because although they might not play today, they will be needed tomorrow. Him being on hand means all of these situations are given more contact time.

“He’s had conversations with David [Holdsworth], everybody’s happy with the situation. I certainly supported that action and I’m happy he’s committed.”