United boss Chris Beech gave us his reaction to the away victory at Port Vale shortly after full time on Saturday afternoon, having watched his side make it three clean sheets in four games as they recorded back-to-back league wins. 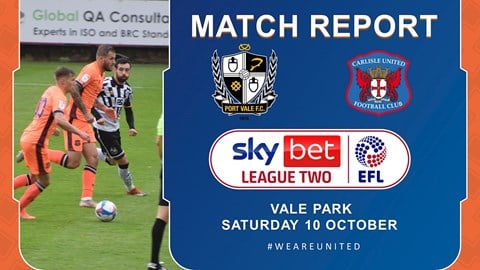 “We were resolute, consistent and we showed great energy and fitness,” he said. “We saw fantastic squad togetherness in a degree of discrepancy, really, because numbers are low.

“There wasn’t anybody missing out today in terms of not coming with us because they were above what we needed. Obviously JJ Kayode is away on international duty and it was even touch and go with Gav Reilly.

“He only trained yesterday [Friday] and that was the same with Gime Touré. When I was asked those questions about selection on Thursday about this game it was difficult for me to pick a team at that point. We got there in the end and the lads did great.”

With an excellent team performance for the full 90 minutes seeing the job through, he admitted that he’d thought that early missed chances were going to play a big factor in the end result.

“Port Vale are one of the favourites to do well this season so to come to an away venue like this, to be honest with you, I felt like we might not win because we had chances in the first half that we didn’t take advantage of,” he told us.

“When it goes like that in an away game it can go against you, but fortunately it wasn’t like that in the end. The lads really stepped up after half time, in my opinion. Joe Riley responded to the half-time team talk we gave and he got better and had more of an impact. 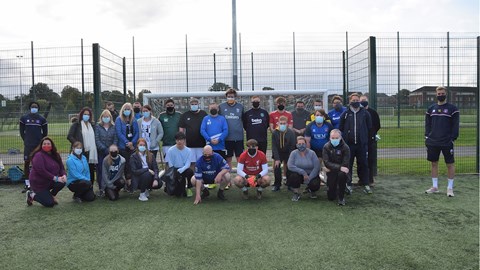 DO ONE THING: Player visit as part of World Mental Health Day

“The midfield took even more of a stronghold. Callum Guy was excellent and we dominated the middle third of the pitch. That allowed everybody to get into a rhythm.

“From there Lewis Alessandra probed with his attacking and Gime Toure was constantly taking players on. We should have scored three or four goals when you look back at it, and that’s the only disappointing factor.”

Speaking more about the powerful midfield display, which let Port Vale struggling to find a way through, he commented: “It’s because we’ve got super Jon Mellish isn’t it … I told you!

“I’ve done it before with different players, but fair play to Jon because he just keeps running and moving, and he lands on the right spot more often than not. The ball drops to him because of his constant movement and he’s getting his reward because of that.

“He actually didn’t get many chances in this game but he scored himself another goal. What I really like about him is that he drives us on with the way he runs with the ball. We made a very good, strong team – I wouldn’t say look average, because that’s disrespectful – but we definitely dominated the football match.

“I don’t think it was one, but Paul [Farman] saved it and he’ll have backed himself to do that. In the adulation of the penalty save I had to knock the lads’ heads together a little bit to keep them concentrating on the fact that the corner was coming in.

“They dealt with that and from that point onwards we should have made the game much easier with the two or three clear cut chances we had.”

With keeper Paul Farman having made the save he was immediately backed up by a goal-saving tackle from Mellish and a snap clearance from Aaron Hayden.

“With the team spirit and culture we’re trying to build they’re all really working hard for each other,” he commented. “Obviously since coming here in November I saw what it was like, and I’ve tried to change it as much as I can. Sometimes you have to wait for change to take place.

“I’m very pleased about the fact we’ve got there because I keep telling people that the dressing room has to represent the community. It’s a hard working group and it has qualities in there which are good.

“Everybody has an ego, but they’re controlled and they’re together in terms of what they’re trying to achieve. We don’t know what we’ll do or how we’ll do it in terms of what will happen long-term, but what we do know is that if we stick to our traits then that will look after us.

“It’s imperative that we represent our Carlisle community when they can’t come and watch in the right way. Again, and I’m repeating it, imagine what 10,000 people cheering the lads on last weekend would do to Jon Mellish scoring a goal, or a lad making his debut.

“Imagine what that would be like for Connor Malley coming on for us, but it’s just eerie silence. That does affect people, but I’m really pleased with how the players are dealing with it.”

Another notable positive is the way the players who haven’t been starting regularly are stepping up to the task whenever they are being asked to do so.

“That comes down to our planning, but it’s alright planning – it’s the players who have to commit,” he insisted. “They’re training after games when they haven’t played.

“At home games they’re doing an hour after full time when I’m doing interviews with you, then I go out and watch them. They’re training hard to get their opportunity.

“I know that Jurgen Klopp made sure Harvey Elliott got a medal for winning the Premier League, and some might say that he didn’t play, he didn’t do this, he didn’t do that, but Jurgen understands the strength in having a culture in his team, and the way he trained every day made his centre half better.

“That’s why it’s important to see a competitive spirit every day, in training and in games. Our players have that, but we’ve got to make sure it keeps growing.”

So is the first away win of the campaign a weight off the shoulders?

“Within that collective chance, if the players take their individual chance it then gives you a chance of winning. That’s all we’ve done today.”