The summer transfer window shuts at 5pm on Friday afternoon and boss Chris Beech confirmed this afternoon that he’s still actively engaging with players as he continues to assess the situation heading into a busy run of fixtures. 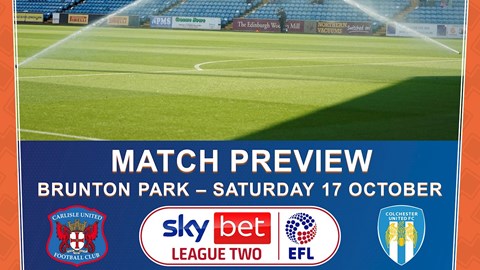 MATCH PREVIEW; U's up next at Brunton Park

Speaking at his weekly press conference, he said: “It’s possible that something could happen.

“I’ve been talking to a lot of players yesterday and this morning, but these things have to come together from all different parties.

“I have to be very mindful, if we do, of getting the right player that supports the culture with the players that we’ve tried to create here, so we’ll see.”

“I think what will be strange this season more than any is once the deadline’s passed, the players scrambling who haven’t got clubs attached, will still be available after that point, but of course they’re not match fit or training regularly,” he continued. “It’s so different to a normal circumstance that we need to look at all options and not panic.

“The squad’s a good squad, it’s ambitious, energetic, young, has a good mix with a few experienced players, and it’s important that anyone who comes in can support that.

“We are active but we’ll see what happens. Like I say, it has to be the right player who is showing ambition and who will fit into the culture we’re trying to create within the changing room.

“I want us all to represent the community with hard work, honesty and with an ability to go again when the chips are down. To get that you need players who are willing to run, work hard and support each other.

“It’s important we get that type of player as well as somebody with the correct football qualities and technique. We’re looking, and I actually thought I had one yesterday, but his club said no last night. So there you go, that’s what can happen.”

On how he refines his list of targets, he explained: “We have a strategy, and it’s not just what you perhaps deem might be the obvious the answer or obvious requirement.

“You’ve got to look beyond that, and beyond the reasons why you might need to find an answer, because the finances at the club dictate all of that. We try to work very hard to create something that might then grow into something else.

“It can be hard to find that, you have to keep looking, and my staff are working hard at it. We’ve got good back up and support with Jacob [Blain] with analysis on players rather than it being the – he’s doing alright, is he available – type thing.

“We wanted to get away from that and try to have more of a plan. Often the plan isn’t THE plan, and you have to adapt, and we’ve had to change quite a lot recently through the misfortune of injuries, but we’re actually fortunate that it’s happened before deadline.

“There are different things which can affect it and you just have to make it work. With the budget, David Holdsworth deals with that, but we have a good relationship with clubs and things like Ethan, we can try and manipulate certain aspects and we will look at that.

“We’ve had a few phone calls in the last couple of days, there’s clubs offering players sometimes for minimal amounts, and then you’ve got out of contract players looking to gain a wage to pay mortgages that are more than players you can get on loan.

It just depends what happens, what fits, what characters they are, what they bring to the team and what we need. It’s just a complete balancing act. Sometimes often the one you feel is the right one, there’s always a late runner and that’s the way we should go.”

As for outgoings, he said: “Maybe. I had a conversation with Jamie Armstrong the other day, he’s a young pro and he isn’t getting any football in terms of Saturdays at the moment.

“But in terms of anybody else I would suggest not. On Saturday against Port Vale, there was only Jamie and Taylor Charters, and Taylor came with us but didn’t make the bench. Our numbers aren’t big enough to start moving players out.”

And with that pool of players who are without clubs, we clarified that the closing of the window on Friday may not mean that activity completely comes to a halt this side of Christmas.

“There are some strong players in that group and I’ve been speaking to people who were looking to get promoted at League One level, and who were promised contracts,” he commented. “They had spoken to clubs, met the managers and then the contract offer has been flipped to a pay-as-you-play deal.

“They haven’t committed to that because they’ve felt they could get something better, so they end up not picking anything up. The current circumstance has affected that group of players because fans can’t come back.

“If fans could come back it would give the clubs more confidence to invest in those players. It’s going to be really strange and there’ll be a lot of players who unfortunately won’t be playing football.”