Tuesday night’s starting eleven was unchanged for a fourth game on the bounce, with the team having won four and drawn two if it’s six league fixtures this month. 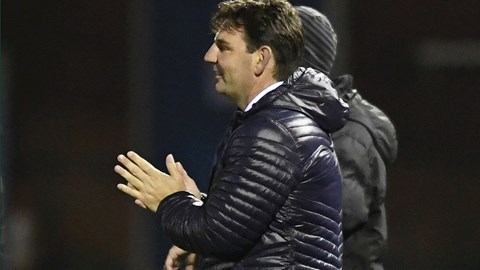 That run has taken the Blues to the brink of the automatic promotion places, albeit at this early stage of the campaign, with a feeling that there’s still more to come as they continue to play an attacking brand of football.

But with the fixture schedule so packed, we wondered if manager Chris Beech had been tempted to make any changes for the visit of Morecambe, particularly after the weekend Grimsby encounter, which had been played in heavy wintry conditions.

“No, not really, I hadn’t really considered that,” he said. “The Grimsby performance wasn’t great on Saturday but I knew they wouldn’t play like that again.

“We’ve got to be mindful of the wind and the conditions at the weekend, and the slippiness of the surface we had at Grimsby. They weren’t great either, and Ian Holloway admitted that afterwards.

“We responded really well to knowing we needed to be better, and we trained for that because we have the hunger and ambition in the team that wants to represent honesty and hard work. That’s how it should be because people work very hard in and around town, and they expect their team to do the same. 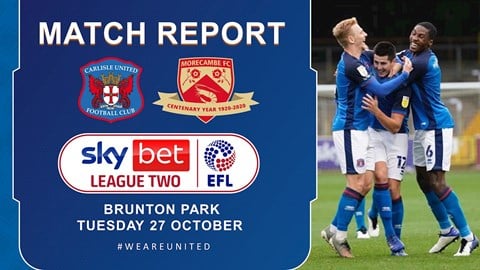 “And if you’re working hard it makes it more difficult for me to say you shouldn’t play. Every player needs to train hard so that they’re ready. On Tuesday we had very good players who didn’t get changed, and we have to keep them happy and with capability of doing something for us.

“But until we can visibly see someone saying ‘it isn’t for me’, there’s no need to change too much. All we can ask is that they keep representing themselves and their fans in the right way.”

“It’s so unfortunate they can’t be here,” he added. “We’ve never beaten Morecambe at home and we can’t share this with them, I think that’s such a shame.

“Jon Mellish is scoring his goals, Micah Obiero has made his league debut, George Tanner scores his first ever league goal, and it would be so good if people were here to experience all of this with us.

“I suppose the good thing is that while we can’t have fans we’re doing everything we can to represent them in the best possible way.”

Man of the match on Tuesday night was right back George Tanner, who capped off an excellent personal performance with his first ever senior league goal. 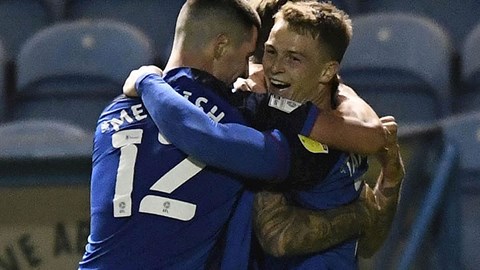 GALLERY: The Morecambe game in images

“The good thing about George’s goal is that he didn’t check out,” he said. “He swung his left leg and he got rewarded for it. It was a great goal.

“He’s another good young player. I saw him play for Morecambe several times, because that’s what I do, I watch a lot of games, and he was definitely the right person to recruit for Carlisle because of his age and his potential, his athleticism, his strength and his locality.

“It’s hard to recruit sometimes because of logistics and finance, but this move fitted for everyone. George had options, he had Championship options, but possibly not to play in the first team. I assured him that if he came to us we’d make him better, so we’ll see what happens.”

Speaking once again about the current impressive run of form, he told us: “I honestly don’t think about things like that.

“All I think about is that game in front of us, how we have to prepare and respect the opponent, how we have to make sure we do what we have to do as staff to be right for the lads, but then the lads have to commit to us with the plan we have.

“They are allowed to come off plan a little bit. I often did as I played for Huddersfield for Steve Bruce, and he’d often ask me what on earth are you doing over there on that side of the pitch, but I’d answer it by scoring or by doing something else that was prominent.

“If you come off plan, make sure it works, but we have good strategies for games and the players put them into practice. That’s all we can ask of them.

“But, yeah, of course I always want more. It’s like in any business, if you get comfortable and do the same you go backwards. If there’s a criticism at the moment it’s the one we keep talking about, and that’s to be more ruthless.

“I want us to be more composed in the final third and I want more shots that hit the target. The lads are hard to live with because of their energy and professionalism. They’re hard to play against, but I would like to see more goals.”

And with a further update on striker Omari Patrick, he said: “I think my physio doesn’t want me to play him until 2025, so I’ll have a battle with him.

“He looks a lot sharper, but he did miss the bulk of pre-season, so I’ll have to have an arm wrestle with Ross and we’ll see who wins so we can decide where we’re at with Omari.”