United head off to Exeter this weekend, via a training session at Villa, with both teams showing good early season form. 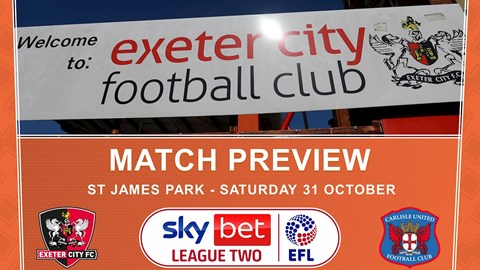 The Blues are on a six-game unbeaten run, with the Grecians on seven, so the game has all the makings of an exciting encounter, as tend to be the case whenever these teams lock horns.

We spoke to manager Chris Beech to get his thoughts on what is another long trip.

“It’ll be a very tough one,” he said. “They obviously have Ryan Bowman, who was here with Carlisle, and he had to go and work really hard to get his break in professional football.

“He’s doing well with his goals to games ratio for Exeter and he’s one of those old fashioned all-encompassing physical strikers.

“They’ve got some really good young players and a great structure at the club which means they come through and play quite a few games before they go. Then, when they do go, they tend to go for considerable amounts of money.

“We’ve done very well ourselves recently with that, with the likes of Jarrad Branthwaite going to Everton, but Exeter have been doing this for a long time now.

“It’s where every club wants to be because you want the benefit of seeing good young players play for you, and if they are eventually going to move on you then get the financial benefit as well.”

“Matt Taylor their manager is a brilliant bloke, and when I phoned him about recruiting Brennan Dickenson he was very honest and very open,” he continued. “I have a lot of respect for that and I think he’ll do very well in the game, because it’s great when you can have conversations where you know you’re being told the truth.

“He’s got a good team and he’ll want to see the next few months through so that he can get to January and still be around the top places. That’s when I expect to see them invest some of that cash from the Ollie Watkins move, the £4.5m or whatever it was, so that they can have good a go at it.

“Unfortunately for the current manager it was late in the transfer window, but I’m sure he’ll get his hands on some of it in January.”

With the Cumbrians proving to be extremely hard to beat, we wondered if it had made the manager reassess his aims for the season.

“I wouldn’t put any marker down in terms of what can and can’t be achieved,” he said. “The bookies don’t usually get it wrong and they tend to back the teams who have massive financial clout.

“As the season progresses you will see differences within that, as we’ve already discussed with that Exeter could do with the windfall they received.

“Things like that will happen, but we all we can control is what we do about ourselves. That’s why I keep saying that we need to continue to represent our community with hard work and honesty, and our technique will come out within that.

“We need to stay consistent to those traits - but where it takes us, I don’t know. If we deviate from it, that’s when we have to get it back on track.

“Currently the lads are doing great and that’s what we need to focus on so that we can carry the good work forward.”

“The good thing about what we’re doing now is that it comes from us having worked very hard in pre-season,” he explained. “We now have a group of people who are ambitious and who want to make a mark in football.

“It’s important you have that so that they’re playing for a purpose and it means something to them.

“They’re great in terms of having relationships with each other, you need that inside a team framework, and they respect each other that way. There’s no ‘bad egg’ as you would call it, in terms of the changing room.

“That might change, but at the moment everyone is really supportive and that’s all you can ask from your workforce. You’re going to have times when it isn’t great, and we’ve had them already with our injuries and at the start of the season, when results perhaps weren’t what we wanted.

“We’re only just beginning on our journey and I think this squad has a lot of growth in it. That’s why we’ll keep our feet on the ground and carry on doing what we’re doing.”

As for bumps and bangs heading into the Halloween weekend, he said: “You always get a few knocks and niggles because the lads are covering more distance than they did last season.

“The work rate and energy levels are high, and it’s been a good month. We’ve beaten Port Vale who hadn’t been beaten at home this year, and I found out after the game on Tuesday that it was the first time ever that we’d beaten Morecambe here. 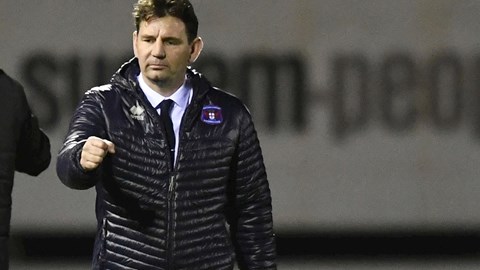 MANAGER: I honestly don't think about things like that

“There are some big markers that we’ve put down, but we have keep that focus we’re talking about because this is only the start.

“With us leaving on Friday it meant I had to assess who I could take 24-hours earlier than normal. Due to finance we can only take 18 players, and you usually have an extra day to make the decisions, so all of that is taken into consideration when you look at your squad.

“Whoever is picked we got there to represent everyone properly. There are no guarantees because every day is a brand-new day and every opponent provides a brand-new situation.

“Like I say, I have massive respect for the way Exeter have gone about what they’ve done, so it’ll be tough. We’ll prepare well and we’ll see where we are, but it’s a game I’m really looking forward to.”

And on how the training time at Villa was finalised, he said: “Dean Smith is a great bloke. We did our A licence together way back, I know him very well and he did really well with Walsall’s youth system when I was coaching youth team football at that point.

“He always had a competitive team and we enjoyed some good battles. He had respect for what I was doing in terms of how I was developing young players, and we stayed in contact that way.

“I went up against him many times and it’s nice to see somebody who has worked so hard do well with what is his club, because I know he was born and bred that way.

“They’re doing well in the Premier League so for him to take my call and be able to get this organised is really good. It’s got nothing to do with me, but everything to do with what type of bloke Dean is.

“It’s superb that he’s got to the level he’s at because opportunities for home grown managers to manage at the top of our game have been restricted. We definitely thank him for allowing us to use his training facility.”