United saw first-hand last season the benefit of moving to reward players at all levels of the club who have performed well, and that policy has continued into this campaign with second-year scholar Lewis Bell signing his first pro deal ahead of schedule, and midfielder Jon Mellish also having been secured on an extended agreement. 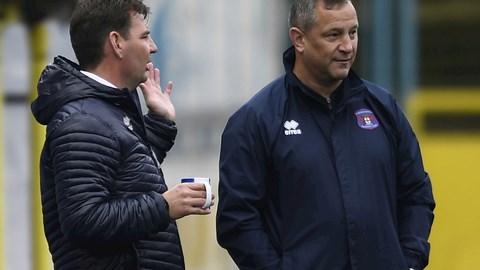 INTERVIEW: We work to a strict remit

Speaking about the strategy this week, director of football David Holdsworth said: “I haven’t changed since I’ve been at the club.

“I gave Jarrad Branthwaite a three-year contract, I gave opportunities to Galloway and McCarron, and that’s proved to be healthy for us.

“I have to say, Lewis Bell is as good as any of those. Right now this kid has got so much natural ability, whereas Jarrad had the physicality, the height and certainly the potential to go and play in the Premier League.

“I have no doubt that Jarrad will go on and play regularly at that higher level if he stays fit and continues to learn. He’s a great kid, and I’m proud of him, and I think Cumbria should be proud of him. He’s a Cumbrian boy and he’s going along in the Premier League, how good is that. It’s amazing.

“The two other lads at Leeds are having to be more patient. I hope they do get their opportunities, but they’re at a good club and they’ve shown their ability. They’ve gone to good homes and the deals have been good for us, certainly in how they protect us.”

“But young Lewi Bell, goodness me, he has every chance,” he continued. “He reminds me of a player at Bournemouth who I saw when he was at Sheffield United when he was a kid in David Brooks. I think Lewi is similar to him.

“I remember speaking to Jarrad about the fact that I’d seen Maguire at Sheff United as well, and I had no problem in telling people when they asked that he had that same potential. I think Leicester sold him for £74 million, or whatever and, like I say, if Jarrad continues the world is at his feet.

“Lewi Bell might surprise a few people outside Carlisle because of his natural ability. He comes from a lovely family and we’ve got to make sure we keep looking after him and progressing him.

“There are one or two others in the youth group as well because they’re competing well, and it’s good for us all to have that.”

“Another of our young players is Josh Dixon, and I’ll be so delighted when he gets on the dance floor,” he added. “He’s another great kid and he’s had two years of hard work, but he’s done that now and I’m so looking forward to him being involved.

“I tell him every day that he’s one of my favourite players. He’s another who has so much natural ability and we hope that he can stay fit and get back to enjoying his football sooner rather than later.

“We can look at Taylor Charters because he’s on the edge of it all. He’s grown into a man but he still has a young mind. When the penny really drops he’s going to go on to be a good player, without a doubt.”

Getting back to issues of the transfer window, and looking outside the club at the free agent market, we wondered if that was still an area we could tap into.

“Yes, but I don’t know where we’d add them,” he admitted. “Right now I don’t think the squad needs too much. The only thing you could do is if you bring in a League One player who will really improve you.

“Our squad is healthy, and losing the first few games may have given them a bit of a rude awakening and a wake-up call. We’ve all chipped in to support Chris and we’ve then gone on a run of games where we’ve been successful and we kept clean sheets.

“Paul Farman has been brilliant since he came in, he’s got an amazing kick, and he’s got Marcus and Magnus backing him up. There’s a group of young players who are supporting the team, and do you really want to stifle their progression by bringing more players in?

“We don’t want that. I think it’s a time where we have to be patient at the same time as we provide our support.”

“Anybody who is still out of contract right now, maybe they go to Aldi now instead of Marks and Spencer, I’m not sure,” he continued. “I spoke about this right at the start of the transfer window, because there were some players who were asking for fees which were stupid.

“They were thinking that Carlisle United would pay X amount, and it wasn’t realistic. We had other options, but if those boys are still out of work then I feel sorry for them. Everybody has to make their decisions and if they’re not playing I don’t know how they’re keeping fit.

“If they’re in at clubs and keeping fit, great, but don’t get injured because it will come back to bite you on the bum.

“We’ve made good decisions here and Chris knows he’s got a good squad. Once those other lads we talk about are fit, the likes of Omari and Brennan, we’ll be more than ok.”

With the team leading the way in the post-match positive stats charts (shots on target, entries into the final third, etc) there’s a real sense of purpose as the group heads into every game feeling that it can get a result.

“The training is good,” he replied. “When the board made the decision on Chris, who nobody really knew, the fact of the matter is that he’s a very good coach. You can’t beat coaching, it’s what the players need.

“The other side of it is man management, and Chris is in his first job where he’s getting support and he’s learning. I’m sure he’s got a million contacts outside the game that will be a shoulder for him to utilise.

“He’s a good man with good morals, and if he coaches to the top of his ability and the players keep listening it’ll be conducive to the positive stats working out on both sides. They certainly work hard as a football department, and those stats don’t lie.

“I’m a massive believer in those types of things, so it’s good to see. All of the lads are working hard – none more so than Jon Mellish. He now has the protection of a longer contract, which I think was good for him, and we can often see inside this club what other people can’t see.

“People do judge sometimes when they haven’t seen the other side of it. Jon is improving every day and he came back fitter, stronger, leaner, quicker.

“We mustn’t fail to recognise that Jon came here as a left-sided centre half and he’s now probably playing as one of the best central midfielder players in the league.

“Chris made that switch and he should be rewarded for that, without a doubt. It was his judgement after Jon played in a friendly down at Kendal where he scored a hat-trick. Jon had never been that far up the pitch before, so Chris should be acknowledged for having made that call.

“The club backed him, and Jon now knows where his future is. He’s enjoying his football and he’s a menace now. We saw Harry Pell, a distinguished midfield player who is very well respected, Jon really made an impression on him.

“Jon needs to realise how good he can be and continue to work extremely hard to achieve it. I think there’s a lot more to come from him, but he can grow here, and that’s good for him.”