United played their part in what was an all-action encounter at the Stadium of Light on Tuesday night, and assistant manager Gave Skelton gave us his thoughts on the game shortly after full time. 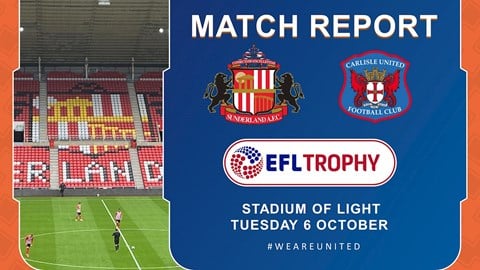 “It was frustrating because we’ve come to a stadium like this and we’ve scored three goals, but we’ve still got beat,” he said. “That’s really disappointing because you want to win every game and you want to get the lads used to the winning feeling.

“We can take some good positives from it, particularly in terms of scoring three really good goals, and we’ve had lads out there getting important game time. Some people performed really well, but we have to hold our hands up and say we shot ourselves in the foot by conceding five.

“I know you always look with blinkers on that any goal is a bad goal to lose, but there were some really bad goals to lose in this lot. That’s why it’s so disappointing to have scored three and still get beat.”

“Like I say, we played some really good stuff, and we are happy with that,” he added. “We got in front with a good move, but we conceded two really soft goals after that.

“The free kick came off the wall with a deflection, and these things happen, but it is frustrating for everybody. The second goal, we don’t follow a run and there’s another deflection.

“That’s them ahead without them really creating a lot of chances. The good thing was that we responded well. Taylor Charters had a shot that the keeper saved and Max Hunt had a couple of headers cleared off the line, so we felt like we were in it.

“I thought Danny Devine was brilliant with how he set up the penalty, and I thought Lewis Alessandra was excellent with how he led the line. His performance was a huge plus point, his best of the season so far.”

Speaking more about going in front despite what had been a string start from the Black Cats, he commented: “They did start brightly but Danny was first onto the loose ball and he drove past people with excellent power.

“We got the penalty from Ethan’s run and for 10 minutes or so after that we thought yeah, game on, because we looked comfortable. The free kick really is one of those things because he didn’t even hit it that well, and as soon as it took a deflection Magnus was beaten.

“That got them back in the game from not really doing much. We had to show a bit of character once they got in front and Jon Mellish obviously continued from where he left off on Saturday with two excellent goals.

“Callum Guy came on and influenced the game and there were a number of players who got good minutes and who stayed strong for us as the game went on. That showed we have good fitness levels, and that’s something that is very pleasing.”

There were seven changes to the starting line up from Saturday, and it proved to be an opportunity for those players to stake a claim.

“It can be difficult for the players when a lot of changes are made,” he said. “That was done for a number of reasons, with injuries and things, and with the fact some players needed game time.

“They deserved that chance because they’ll feel it’s unfortunate not to be getting more opportunities, and for a new team that only really worked together yesterday [Monday] they played some really good stuff.

“If you’re looking for reasons, maybe that’s why we shipped a couple of really disappointing goals because there are new combinations in there who haven’t played together and who haven’t trained as a unit that much.

“The average age of the starting team was 21, and that’s not doing Lewi Alessandra down at all. There were a number of English league debuts or starts, and they’ll all be pleased about getting that at the same time as being disappointed with the end result. It all bodes well for us in the busy period ahead.

“There are injuries, we have JJ Kayode away on international duty, so there are places up for grabs. That’s what we keep speaking about, we don’t want players to just take part in games, we want them to want to be out there and to win for us. It’s about putting a stamp on your performance and giving the manager good headaches.”

A storming performance against the side he’s supported all his life from Jon Mellish took his goal tally to three for the season as he made a huge impact from the bench.

“With Jon, it’s one of those situations where he probably hasn’t been playing as badly as some people have said he has been, and people also get carried away the other way when he scores, or whatever,” he told us. “From our side we know what we get because every day he’s at the top of the running stats, and I bet he’s ran furthest tonight even though he wasn’t on as long as everyone else.

“He’s honest, and you can accept mistakes when they come through honesty and effort. I think his performances have generally been quite good and thankfully he’s adding goals to that. He’s on a little run and hopefully he can continue that.

“We had some young lads out there, and the experience will be so important for them. It was important for Taylor to get his start and I thought Lew Bell looked composed when he came on, which was good for him. That will give him confidence.

“He’s been training with us for the last few weeks, and for both of them you can’t beat experience, and there’s nothing better than actually playing in a match. You can do all the training you like but you really learn your trade in matches.

“Magnus [Norman] got his first appearance and he was in really good shape when he came in for pre-season, but he was obviously unfortunate with his injury. He needs games and more training sessions to get back to where he was, so it was pleasing for him to get his debut and 90 minutes tonight.”

On the current injury situation, he explained: “Ethan Walker went over on his shoulder and hopefully it’s not too bad. We’ll assess it over the next few days.

“Gav Reilly and Gime Toure have knocks.  Gime came off on Saturday with a recurrence of his injury so he might be a couple of weeks, and Gav Reilly is struggling with a bit of an injury, so we don’t know if he’ll be ready for the weekend.

“Dean Furman will probably find that the weekend is too soon. Injuries aren’t ideal, you always want all of your players to pick from. It’s just one of those things, and we now know we’ve got good players in the building who will get an opportunity to show what they’re about.

“Whoever is available, we go into the weekend in good spirits. We’ve played really well over the last two games, and we scored goals in this game, which is pleasing, but we want to be winning. We got that Saturday and hopefully we can do that this Saturday coming.”

And another boost for the dressing room was the news that the red card shown to Aaron Hayden had been overturned.

“A lot of people at the club worked hard on that appeal over the weekend and we think we got the right decision,” he said. “It’s a boost for Aaron and us.

“He gives us a real physical presence and we need our leaders out on the pitch. He’s certainly one of those.”