Captain Nick Anderton admitted after the game on Saturday that it was important for the team to see the win through, particularly having been reduced to ten men so early in the second half (and with a whopping 14 minutes of time added bolted on at the end). 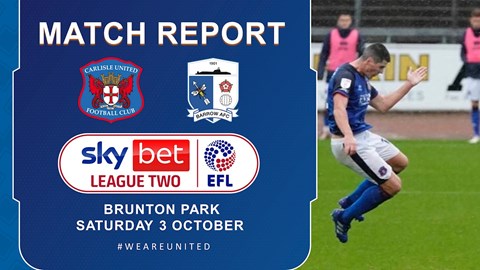 Speaking first about the victory in the first Cumbrian derby to be played for 56 years, he told us: “It was a massive result for us. I thought we started off brilliantly, created a few chances, got the goal, but the sending off changed the game completely.

“We defended solidly after that. They had a few opportunities, but that’s going to happen when you come under pressure and to keep a clean sheet after everything that happened was just what we needed.”

The red card for Aaron Hayden brought a switch to centre back as Jon Mellish dropped into the left back role.

“I haven’t played there for a while,” he confirmed. “It took a bit of getting used to, but it’s just defending at the end of the day. We needed to be solid down the sides and in the box.

“We knew there was going to be a lot of stoppage time, and there was something like 14 minutes after the sending off … it was definitely a shift.

“That’s two home wins with two clean sheets now, and it’s a great place to play, the pitch is fantastic. It’s absolutely lashed it down all day and the pitch doesn’t even look like it’s rained on it.

“It’s a shame that fans weren’t allowed at the game, it would have been massive for both clubs, having not played each other so long in the league, but we got the win, which is what we wanted.” 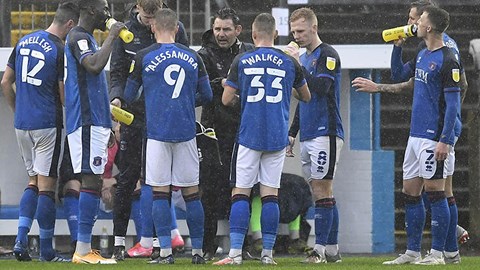 With the sending off incident having happened off the pitch, as most players from both sides were getting back into shape, he said: “I personally didn’t see it. I just heard Aaron went down with a bit of a noise and all of a sudden the ref’s pulled a red card out.

“I didn’t see any kicking out or anything. We had to dig deep but we actually could have been out of sight before that with the chances we created. I thought Ethan did well, Gime was Gime, he was excellent, a great cross for Jon’s header.

“Jon had a shot just over, JJ had a couple of opportunities, one where he’s come inside and then a header, and we limited them to very little in the first half.

“And it’s great that Jon got his goal. He worked so hard, it’s excellent. It’s a little thing in the team with how we play, some people probably don’t realise, but for us we know he’s massive, he covers so much distance.

“He’s always there for second balls and he’s a good athlete. It was a great finish, he looked like a striker the way he headed that in. A great finish.

“And we’ve seen already this season that the first goal is massive. In every game we’ve played so far, even at Cambridge, we’ve gone down two goals and that’s difficult. With no fans there it’s much harder to build up any momentum.

“We’ve progressed as the games have gone on, we can feel that. We’ve created better chances and looked better as a defensive unit, which is vital. To keep a clean sheet, we know have the attacking players who can go and score against any team.”

And with the result the exact response that was needed after the trip to Scunthorpe, he also confirmed that confidence is still high within the group.

“We knew we needed to bounce back after that performance,” he told us. “If you lose one, win the next, that’s important at this level.

“That’s two in two home games and that’s good for our confidence. We shouldn’t have conceded that one at Scunthorpe, from our own mistakes, but we learned from it and bounced back.”

“None of us like getting beat,” he continued. “Especially when, personally, I’ve had a couple of games where I haven’t been myself. I’m always really critical of myself, that’s how you progress.

“I made a mistake at Oldham which wasn’t like me, and the first few minutes against Southend wasn’t like me either. But in this game I felt good, and it’s massive getting that win on Saturday.

“When you lose, you’re always thinking about it. You don’t just go on the pitch and play and forget about it. It affects you, that’s why winning is important.

“With mistakes, you have to be a man about it. I’m the captain, so if I let myself get dragged down I could end up taking others with me. Errors happen, you don’t like it, particularly if it costs a goal like it did at Oldham.

“I know it’s not like me so all you do is put it out of your head and get on with it. That’s the same for everybody else, because we know we have a good group of lads in there.”

The win on Saturday, of course, was against one of his former clubs.

“It was strange playing against Joel Dixon, who I played with for so long,” he admitted. “I know Scott Quigley from my past club, but for the fans it will be a bit of bragging rights, which is what football’s all about.

“As a player you’re a professional and it’s about the club you’re with, that’s what matters. It’ll have been the same for Patrick Brough and Mike Jones, all they’ll have been thinking about is getting the win for their team.

“That game has gone now and it’s on to Sunderland next. “It will be great to go to the Stadium of Light again. It’s a massive stadium, we played there in pre-season, and there’s no fans but it will be a good opportunity to play there.

“Whatever side we play, we’ll all be up for it. Our job is to win the game and that’s what we’re going to try to do.”

Click HERE to watch an interview with Andrew Hall on iFollow United now.