United’s under-18 side worked hard to claim a good victory over Bradford City on Thursday night and their FA Youth Cup win sets up a third-round encounter with Blackburn Rovers, and the prospect of another mouth-watering game. 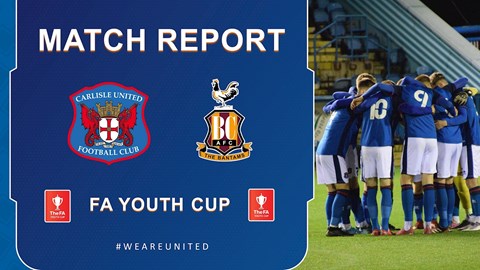 YOUTH: Report from the FA Youth Cup second round

Youth boss Eric Kinder spoke about the win under the floodlights shortly after full time at Brunton Park.

“I think we deserved it,” he said. “I was a bit worried in the first half, even though we went in at half time 2-1 up, but I was worried about the way we were playing.

“We weren’t pressing high enough or playing high enough up the pitch. I thought we were a bit fortunate to come in ahead at half-time after their mix up between the keeper and defender.

“Adam [Walton] did well to take advantage of that mistake and put us 2-1 up, and it gave us a platform going into the second half.”

“I thought we were terrific after the break,” he continued. “We played against them in the youth cup last season and in the youth alliance on Saturday, so we knew they liked to play out from the back.

“We worked on a system during the week where we wanted certain players in their team to get on the ball before we pressed. I thought it worked a treat in the second half and it could have been a bigger margin than 3-1, but I’ll obviously take what we got.

“The youth cup isn’t development football, it’s all about the result and it’s the closest thing they get to first team football. It’s a must-win game and we won it really well in the end.”

The opening goal of the night came from what looked to be a training ground corner routine.

“For the first goal, it was something we worked on in training,” he explained. “It’s the first time in a long time that I can remember putting something in place in training and it working first time.

“We only did it yesterday [Wednesday], Elliott’s [Day] man gets blocked by Barney [Josh Barnett] so Elliott can head it back across. Sam [Fishburn] is always on the front post for corners so the idea was that he should be there to head it in, and it worked a treat.

“When it happened I just looked at Birchy [Mark Birch] and started laughing because it’s the first time we’ve ever planned anything that has come off first time. It’s very satisfying when things like that happen.

“We let ourselves down at the other end and conceded from the set piece, but if I’m being honest we’ve tightened up a lot on set pieces this year. It wasn’t a good goal to concede but it’s something we’ll keep working on.”

Alertness from Adam Walton restored the one-goal advantage before the break, but the youth coach insisted that hadn’t changed the tone of the team talk.

“Although Adam scored that goal just before half time our team talk stayed the same because I’d already decided we weren’t playing to our potential,” he told us. “I didn’t think we were anywhere near it, we’ve been so much better than that this season, but going back to a lot of interviews we’ve done, we just can’t get the consistency.

“We can’t get it right for a full 90 minutes. We weren’t right in the first half, but we still found ourselves 2-1 up which gave us a platform to build from, and in the second half we got that consistency with an improved performance.

“We ran out comfortable winners in the end. The boys are getting fitter which has been difficult with the reduced pre-season and the lockdown period with no games. We didn’t get the usual six-week pre-season and we weren’t fit enough at the start of the season. We’ve consistently worked hard and they got their rewards tonight.” 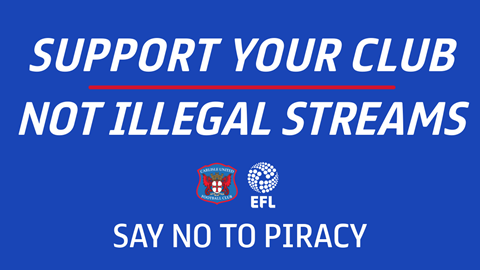 Speaking about the dominance of the second half, he commented: “We have an approach where we don’t let teams get off the hook, we don’t sit back, we go again.

“If that Lewis Bell free kick had gone in we’d have been comfortable, and it’s that kind of thing I’ve been trying to get into them. I want them to finish games off.

“There’s no secret to the fact we think  a lot of Lewis Bell and we felt that when they dropped their midfield player in to receive the ball they always left a huge gap around that so-called number 10 area.

“We wanted him to exploit that, but it didn’t really work out how we thought it would. We put him back to his proper position, and we got Dylan Garvey on, who is a good footballer. We thought he’d do a better job in that hole because that’s the position he’s used to playing.

“That put Lewis back on the wing where he causes problems, and that’s where he’s going to make his living out of the game. We tried something in the first half, it didn’t work, so we made the change at half time by putting our best players in their best positions.”

On the performance overall, he said: “I was disappointed with a couple of the first years because I thought they froze a little bit and panicked, and that didn’t happen in the first round.

“I saw a bit of panic and a bit of rushing around and they made wrong decisions. I kept telling them to settle down from the side of the pitch, because I know how well they can play, and thankfully we got that from them in the second half.

“They weren’t composed but they got it back in the second half, and we have to remember it’s a big night for them. You never know what you’re going to get with first years until you see them play in the youth cup.

“They make it massive and it is massive for them. I was talking to some of the pros today, some of them are senior pros who are earning a living from football now, but they all remember playing in the youth cup and how special the nights were.

“I’m glad we’ve got another home draw in the next round but it is a shame that the lads don’t have the experience of going down to play at Ewood Park.

“It’s a magnificent stadium with a lot of memories for me, but I always want to play here on our home ground. If we put the work rate in and they aren’t on the ball then we’ve got a chance.”