Youth boss Eric Kinder gave us his reaction to what had been a thrilling encounter with Chester at Brunton Park on Wednesday night as his side made it through to the second round of the FA Youth Cup in what turned out to be a closely fought affair. 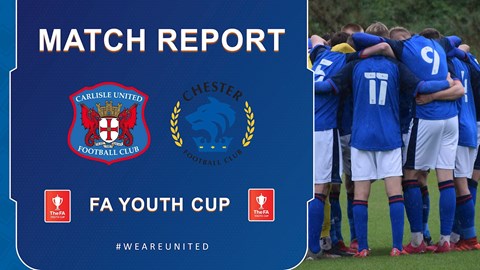 “The game was the story of our season because we’ve been so inconsistent,” he said. “I told the lads before kick-off that I was worried about this game because I wasn’t sure what side we were going to get.

“We just haven’t been consistent and even in this one we didn’t start the second half as well as we’d played for the first 45 minutes. We could have gone up the tunnel at half time with it as game over, and we knew that the next goal was going to be important.

“A two-goal cushion is always dangerous and that proved to be the case again. We didn’t deal with another corner coming under our bar, and we struggled badly with that against Salford.

“To be fair, the three goals we scored were really good and we enjoyed that. But we certainly didn’t enjoy the second half.”

On the quality of the goals scored by the Blues, he told us: “We were really pleased with that. I think Ryan Swailes made two and scored one, and his pass for the first goal for Charlie Watt was outstanding.

“All three finishes were good but we just never got to that level in the second half. No disrespect to Chester but against a better side we’d have struggled because of that.

“It’s the same every year, when you play your first FA Youth Cup game on the main pitch, home or away, it’s a hundred miles an hour and everybody wants to do everything as fast as possible.

“Hopefully that’s out the way now and we can settle down and just play the way we know we can for the Bradford game, but we’ll have to play better than that if we’re going to get through to the third round.”

With the game having been streamed live over the club’s YouTube channel, and the fans having enjoyed the performance, he said: “It’s funny because when we think we’ve been poor you speak to the opposition coaches and they tell you that you’re the best side they’ve played, but we don’t see that.

“It’s like Sam Fishburn up front, he’s so naïve with the way he plays and I’m very critical of him, but every coach we’ve played against this season has told us that he’s battered them. I don’t see it, so maybe I’m too critical, I don’t know.

“I can understand people enjoying that first half and the goals we scored, but I certainly didn’t enjoy their two goals or the way we played in the second half. Maybe I’ll change my mind when I look back on the game but 15 minutes after the end of the game, which is where we're at now, I’m a little bit disappointed.”

“Credit to Chester because any non-league side that gets to the first-round proper has done well,” he added. “It’s like the senior FA Cup, getting to this stage means they’ve got some good players and they’re not a bad team. 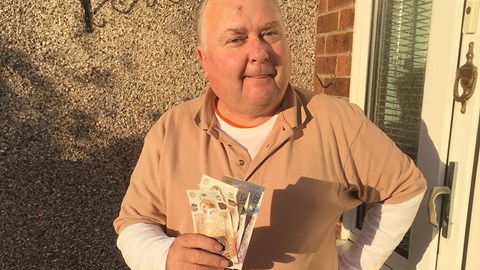 “I expected them to start cramping up about 20 minutes into the second half but that didn’t happen. If you remember last year when we played Bradford they were falling down left, right and centre, and they were full-time lads.

“You could see why Chester have got so far in this competition and I hope they enjoyed the night because they certainly gave it a right go in that second half.”

Round two of this season’s competition brings a re-run of last season’s meeting with the Bantams, on a date yet to be decided.

“Having played them last season won’t really help because youth sides tend to work in cycles,” he told us. “They were decent last year but they were top heavy with second years.

“Looking at their results this year, they’ve been up and down. They’re in our Youth Alliance Cup group and Morecambe have beaten both of us, so it looks like they might be a younger side than they were last year.

“We’re the same, so it’ll be interesting. It was a good game last year, we got beat in the last second of extra time and there was a bit of a kerfuffle at the end, because both teams wanted the win.

“I think we’ve got them twice in the space of a few days in the two cup competitions. One is really important, because you never know who you might get in the third round if you go through, and the other one is a non-event game because both of us are already out of that particular competition.

“We’re at home again so we’ll keep our fingers crossed but, as I’ve said already, we’ll have to play better than this if we do want to go through. We’ll need to do what we did in the first 45 minutes for 75 minutes at least, and that’s something we haven’t really done this season.

“We’ve done well in little bits in games so far, but we’ve also been really poor in little bits as well. It’s the consistency we need or else we’ll get caught out.”

It’s back to the bread and butter on Saturday as United host Bolton in a league fixture.

“They’re new to this division having been a Category 1 Academy, then Category 2, and now they’re a Category 3,” he said. “They’ve been like us results wise, inconsistent, because they have good wins and then they drop silly points.

“Josh Barnett is back from his three-match suspension, which is good. Lewis Bell took a knock tonight so we’ll see where he is, but it doesn’t look too good for Saturday for him. Everybody else is ok so we’ll see what kind of performance we get.”