Sunday afternoon’s trip to Beaconsfield Road brought us a game which had everything, with non-league Hayes & Yeading taking a seemingly unassailable two-goal lead deep into extra time, only to eventually lose out to penalties courtesy of a Jon Mellish inspired fightback. 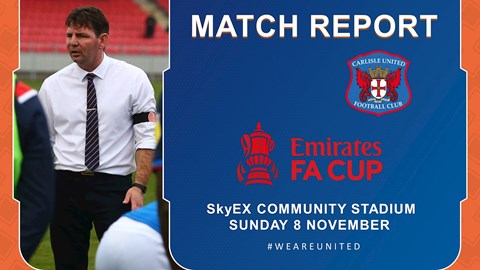 Speaking shortly after full time, manager Chris Beech gave us his reaction to what had been a dramatic afternoon of action.

“This was a committed performance from the Hayes players,” he said. “I met their chairman before the game and they’ve got something going on down here.

“Paul Hughes the manager, he’s brilliant. Well done to them, but I’m very proud of our players for keeping going to the end.

“The fact that we did that got us the win, and it’s my mum’s birthday, so happy birthday mum! She said keep going right to the end to me this morning, so she’ll be happy with that.

“You have to do that in professional sport. Nobody wins a race at the start line, you can only win at the finish line. It’s not how you start, but how you finish. We finished really strong and ended up winning.

“But credit to the other team, there’s a great attitude in their team and manager, but we did it, so well done to our boys.”

With Hayes knowing that football would be on hold for them in the event of them being knocked out, we wondered if that had brought any bearing on how the game ended.

“What a great motivation that is,” he agreed. “I said it before the match because knowing you can’t play after today if you lose is extra motivation to make sure you are. 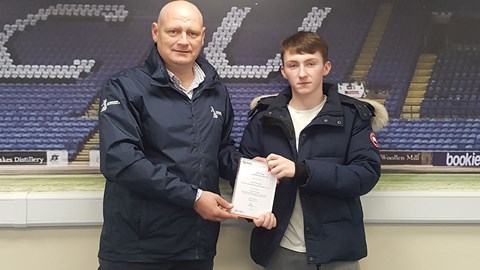 “I can’t give them enough credit. I also want to give our players credit for going right to the finish line. Marcus Dewhurst was great saving those penalties, and it was brilliant to see Gav Reilly stepping up to make sure we won the game.

“I’m so pleased for Marcus. He’s been put on standby for England, he’s been in the previous squads, but he’s been a bit down this wee,k so I perked him up a bit this week by telling him that he was going to make his FA Cup debut.

“He paid it back with two quality saves. The one he touched, hit the bar and hit his head, I thought it might go back in – I don’t know if that would count – but he managed to keep it out, so well done to him.”

As the hosts broke away with two very good goals, there were many who had given up the ghost and consigned the Cumbrians to the pile of giant-killing scalps that had already been built up this weekend.

“I don’t get nerves,” he insisted. “I more stick to facts and what we can control. It felt that it might not be our day, to be fair, because we hit he bar and post, we had four penalty appeals that are turned down, so do you think about it.

“Then they score on the counter, and get a late breakaway goal after that, so you think okay, you’ve got a real test now. But we kept going, kept giving everything, kept believing and the players got their just rewards for everything we’re about at the moment – a high energised team who give everything to the opposition in front of them, and I’m very proud of that fact.”

And as for suggestions that the League Two side weren’t quite ‘at it’ for what was always going to be a tricky encounter, he said: “I don’t agree, I think we were at it.

“We were at it, but it’s always going to be difficult. I was talking to the fourth official, he tried to support me in some of the shouts we had, he agreed but he can’t overrule the referee.

“I’ve got to support our players, they’ve been excellent since the start of the season and here in a tricky tie, and you have to commend the way we ran right to the finishing line. We sprinted right to the line and got our just rewards.

“Never giving up is just something that’s in me. I was never the best player, but I always gave my best. As a coach I’ve been able to recruit or produce Premier League players, with the support of others, and it’s by working really hard and always giving my best.

“That’s what we’ll do to represent Carlisle. If it plateaus or tapers away, we’ll have to get to that point some other way. We’re currently on a crest of an upward curve from where we were when I first came in, we’re doing pretty well but we have to keep going.”

Midfielder Jon Mellish took his tally to 10 for the season with the two late strikes – 10 goals in 10 games – and the manager admitted that they’d shared a joke about the situation after the last home game.

“When he scored the two against Newport, and he came over to speak to you guys, I spoke with him as he was crossing the pitch,” he revealed. “I told him that I normally get to 10 in November, and the season started later for him, but he’s gone and done it.

“If he gets another this month he’s beaten my best year, so well done to him. I’ve never been involved in a finish to a game like this but Jon is a fit boy and he keeps going, and so do the rest of the team.

“This is what you get when players refuse to give something up. It’s a busy period but we’re looking to win every game, and I have to commend the boys for that. We didn’t play badly, we had the possession and, if anything, we played too many passes out wide and we didn’t put them under enough pressure.

“What happens sometimes is that non-league players give you time, so I wanted us to take more time to make the right decisions. It’s a different type of challenge and a lot of our players have never been in this type of game before, so it’s new for them.

“Teams can be 70 odd places below you but they still win, it’s why this cup is so great. You have to deal with it and I’m just so happy that we got through.”

And on the five changes made to the starting line-up, he told us: “Rod McDonald woke up with a sore throat, and straight away we have to be all over that and make sure nothing comes into the building, so he didn’t travel.

“He travels with Danny Devine in the car, so two players were out through us trying to protect our bigger picture, which is so difficult currently.

"The good news is that the test is back as negative, so it appears it was just a cold, but we did the right thing. That means we get the players back knowing we've protected the building.

"That situation enforced a couple of things, and then I just thought Marcus Dewhurst, the way he turned down situations last year when he could have gone on international duty, and ironically this week he’s been told he’s only on standby.

“That’s why I thought it apt he gets his opportunity, his attitude’s been first class, he’s been rewarded, and so have I, because he’s saved the two penalties and helped us get through.”