United boss Chris Beech spoke more about the disappointment of not having got anything from the weekend game with the team having put in another 90-minute shift. 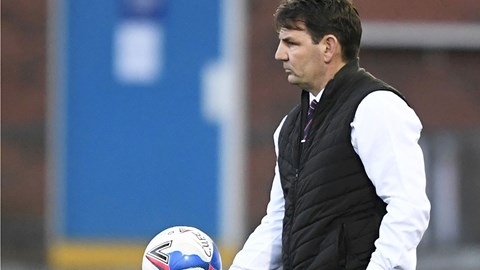 MANAGER: We needed to make something special happen

“Football does this to you sometimes,” he said. “When teams are banked in it’s hard to get a yard, you have to try and get round the back of them or through them.

“Going through them is difficult because there’s almost 11 players to get through. You have to keep passing, probing, and hoping that something does drop. When it drops you then have to capitalise.

“The pleasing thing from it is that we competed all the way. They’re a top League Two team who can pay those extra pound notes for players who were promoted out of this division last year.

“They scored early and that was a proper League Two goal as well, a long throw that gets headed in. I can’t remember Paul Farman having to make too many saves but this is how it can go.

“It’s easy to run and hide and easy not to put effort in when goals go against you, but this team doesn’t do that. Well done to them for that.”

And United showed that fighting spirit once again just before half time when Jon Mellish made it 11 goals in 11 games with another neat flick of the boot.

“I know I’ve said this before but it’s an amazing stat because there are no penalties or free kicks in there,” he said. “I think that’s amazing and long may it continue.

“He’s been amazing, he keeps running, getting in the box, he has that composed capability of putting the ball in the back of the net.

“Others are supporting him, George Tanner and Omari Patrick were involved in the build up for his latest goal, and we got some good performances.

“We just didn’t get our value on points that’s we’re judged on. I’m happy that we put Cheltenham on the back foot but not happy with not getting anything from it. I do feel we deserved a share of the points.

“It’s bound to leave us feeling disappointed, but I’m enthused and energised by these lads. They don’t give up, they stick to it and they got that really good chance which could have been our equaliser.

“If we keep going in games like this we’ll be competing all the way, and that’s important, because it’s what we all want to see.”