United’s longest trip of the season this weekend takes them to the Broadfield Stadium where hosts Crawley have built up a formidable home record. 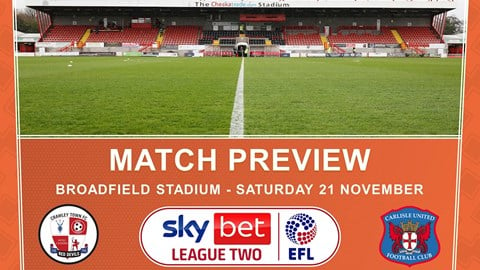 The Red Devils have won all three of their most recent home fixtures and have lost just once in the last five games overall, with a potent strike force to back up their steely defence.

Speaking ahead of the game, manager Chris Beech said: “We’ve just got to keep working hard because teams like Crawley have every right to do well. They’ve got good players and they’ll want a result as much as we do.

“I expect it to be a very tough game. They’re full of running and very energised. I was fortunate to spend 30 mins with the manager John Yems before we played them last season, it was horrific storm weather.

“It was a mad game, we ended up having 24 or 25 shots, Jon Mellish had a couple of chances off the line, Nathan Thomas couldn’t score for all his efforts, we had some great opportunities but we didn’t win the game, we drew the match.

“John, I’d never met him before, but he came across really well. I loved the half hour we had before the game with a cup of tea, he seems like a good guy and I hope they do very well, but of course not on Saturday.”

“I’m expecting some good character and energy from them because their manager has it,” he continued. “He’s a great bloke and his team represent that. I watched his interview a few weeks back and that was very entertaining, and he was quite right in his words.

“He’s strong minded and his team will be the same, so we’ll just have to make sure we’re right at it. That’s what you have to do against any opponent in this league because it’s tight, and every game is winnable whether you’re top, middle or bottom. That’s why they’re all also easy to lose if you aren’t on your game.

“It’ll be a big challenge for us, and we’ll need to be prepared for it. They have a front three [Nichols, Nadesan and Watters] that’s capable of winning League Two, those three players are capable of doing that.

“The young lad is doing ever so well with his opportunity of playing regular football and scoring his goals. He’s the one who has been doing it and sometimes Ash Nadesan has had to sit out.

“What a great situation for them to have to try to fit all three into their team, and they’ve got some good players behind that too. They’ve had exciting individuals for a few years, but we’ll be making our lads aware of the strengths and weaknesses, the possible shapes they’ll play – a diamond, a 4-4-2, some other different things – and we’ll do that without going too deep into them, because it’s about what we do, but we’ll prepare as well as we can.”

With both teams riding high does that mean there’s a different kind of pressure heading into the weekend fixture?

“I don’t look at it like that,” he told us. “We’re just a quarter in. It’s another opportunity to play an opponent that’s very good and test where we are.

“You get different questions asked of you, you have to take different things into account off the field, travel, hotels, different things. When we get to the game, kick-off time, it’s a great challenge for us and we’ll see what happens.

“I’m confident of us turning up and doing well, but I’m also confident of them putting on a great challenge against us.”