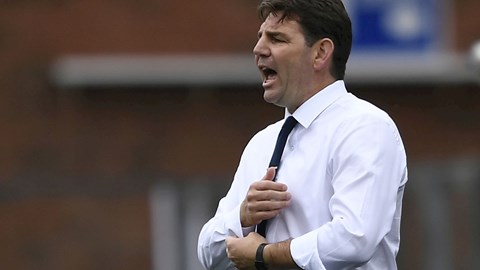 “They’re an excellent side, as their October results have shown,” he said. “They’re a team who, like us, work very hard and they move the ball quickly.

“In recent seasons they’ve had some big games and acquitted themselves well, and they’ll be looking to mount a real push in League Two, as you can see from where they are in the table right now.”

“Obviously we’ve looked back at the disappointment of the ending of our own run on Saturday,” he added. “We’ve drawn a line under it and we’ve prepared well for what will be a tough game.

“Every game is different and whether you’ve won or not, the next game is the biggest because it’s the only one you can immediately affect.

“The FA Cup next weekend, the one after that, they’re important once you’ve dealt with the next one you’re actually going to play, and for us it’s Michael Flynn and his very well organised side.

MANAGER: It just didn't come for us

"Again, it’s another one where you wish our supporters could be here. I know we’re being followed online, on iFollow and by radio listeners, and I can’t thank those who support us enough as they try in so many ways to get behind what we’re doing.

“It’s such a shame, and we saw on Saturday that you do need help from them. We were pushing in that last 15 minutes at Exeter and if our fans had made the journey they’d have been roaring us on and adding to the atmosphere.

“We don’t get that and at the moment you can hear a pin drop … or in our case you can hear the whistle blow when another decision goes against us.

“All we can do is work very hard to make sure we keep the home run going, but we know we won’t get it all our own way.

“What we do know is that this group of players will go out there to try to do that for us. If someone isn’t available through injury or suspension, it gives somebody else a chance.

“We’ll have a good look at who we do have and with the work the staff does we will try to support them in getting the result we want.”