United put on a dominant display at Crawley on Saturday afternoon and they made sure that the only stat that counts was made to matter with three well executed goals.

Boss Chris Beech spoke to us about the game shortly after full time. 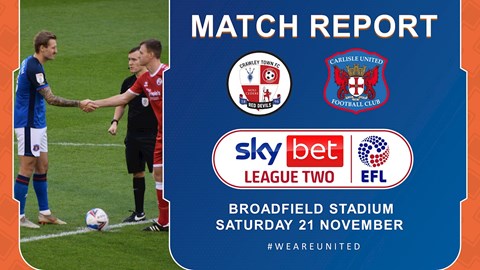 “I said to the lads before the game that it had been quite a while since we had a clean sheet,” he said. “I think our last one was away at Port Vale, so I challenged the team to make sure we got one.

“I think when we won at Port Vale they were a team who hadn’t been beaten at home since 2019, and Crawley were on a similar run of form before we got here today.

“I’m not even sure if they’ve ever gone behind in a home game this season, but they definitely hadn’t lost one. To get a 3-0 away victory is very good.

“I’m not sure if it’s our most complete performance. The scoreline and clean sheet against a team who hadn’t lost at home is obviously pleasing.

“Crawley normally score first in games and they’ve got a potent strikeforce. Two of them started but we kept them very quiet and frustrated them. We did really well in the end so I’m really pleased for the lads.”

The clean sheet was well deserved with stopper Paul Farman having one of his quieter days … in terms of work to do, if not when it came down to orders to bark.

“Paul has got football tourettes and he’s all you can hear during the game when there’s no crowd in,” the gaffer joked. “I think he prefers to be worked, but his kicking and distribution were good and I’m obviously pleased he hasn’t really been tested.

“Every game is completely different, I hope the fans enjoyed this one in their living rooms and maybe had a beer, but then we’re right onto Tranmere on Tuesday night. We’ve obviously kicked off before everybody else so there are no other results yet, but I do know Tranmere are on the up. We’ll enjoy the journey home but we’ll be ready to go again on Tuesday night.”

The quality of United’s goals was a feature of what was a complete away day performance.

“I’d have to look back at the first goal, but I said at half time that I was pleased because I think there was a sequence of six or seven passes in the lead up to it,” he commented. “I’m always shouting on the sidelines for the attacking players to go past their man or ask a question of their opponent, rather than checking out and passing backwards.

“Gime Toure is very good at that. We hit the target a lot in the first half but the shots were straight at the keeper. By Gime hitting the target quite well, it wasn’t a brilliant shot, but we got the benefit from it.

“Rhys Bennett did what he does, he’s very good at the back and he’s a very good option for us to have from set pieces. Hitting the target is something we need to get better at, Lewi [Alessandra] had a shot in the first half that went just past the post, but by missing the target you give away a goal kick.

“There’s more benefit in hitting the target even though Gime’s shot wasn’t as powerful. The pitch is tight and you can’t really play with too much width here. There’s always a ball in the air somewhere, they had two committed centre halves, but JJ Kayode kept going against them and I’m happy that he’s got his goal today.

“It’s a great goal, it’s a proper in and out goal, and he got across his man in the six-yard box. I rang JJ after he’d scored in the week and said well done, his accent gets more Irish when he’s away with the national team, but I was ringing him to ask where my goals were.

“I told him I was debt collecting and he owed me a goal, and he obviously went and did that today. Other than his goal, I thought he was excellent overall. He got tired towards the end and he’s still a young player with a lot to learn, but he deserves a big well done.”

And another stand-out factor from the afternoon was the impact the full backs had on the forward play as they supported every attack.

“We had a couple of Brazilian full back moments from both of them,” he agreed. “George Tanner showed his skill for the goal, then Nick Anderton took half the team on and for some reason decided not to shoot when he got into the box.

“The lads enjoyed it, I was probably barking a lot considering the position we were in because, while we were enjoying it, I wanted to make sure we gained what I’d asked for at the start of the day, which was a clean sheet.

“That’s the first time this season where we could have won by more, but we also kept the clean sheet. I’m delighted for Nick. He’s a great bloke and good things are happening in his private life.

“He missed the week which is why the subs bench was slightly different. We brought Jack [Armer] because Nick didn’t train until Thursday. I asked Mrs Anderton and she gave him permission to come down here and play, so all is good.

“I thought there was a bit of stress in Nick’s performance last week against Cheltenham, which was probably because the baby was on the way. When he had me shouting at him about doing his job last week it was obviously stressful.

“I’m really happy the baby is healthy but I’m also really happy it came before the Crawley game because if it hadn’t he’d probably have wanted to play with his mobile phone in his pocket.”

On the absences of Dean Furman and Rod McDonald on the day, he told us: “Dean has just travelled half way round the world to play two games and play well, there’s no injury or anything, it was just a case of him having a long week.

“Rod is frustrated but we’re confident his injury isn’t that bad. We’re training on a heavy training pitch but that isn’t an excuse because we’ve trained on it when it’s been heavier.

“It’s nobody’s fault, but we can’t get onto the 4G at Penrith because of coronavirus. I still want us to train properly, because I think if we start changing what we’re doing it might change who we are, and I don’t want that.”