With United reduced to ten men and a goal behind at Exeter on Saturday afternoon it would have been easy for the manager to regroup and look to hit on the break, at best. 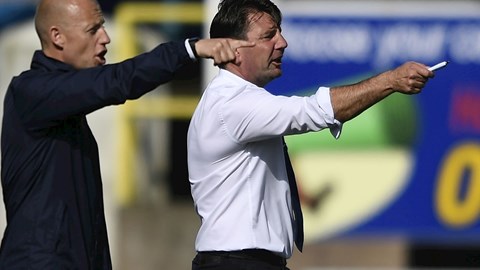 MANAGER: It just didn't come for us

But it was the exact opposite as Gav Reilly and Omari Patrick were thrown into the mix, with the front line gang of four looking strong for much of the remaining 30 minutes as the away side pushed hard to try to level the scores.

“I obviously don’t want to lose but there’s often a gamble to be had, and in this game I felt the gamble was worth it because our lads were all up for it. That’s why I’m pleased with the overall efforts.

“I’ve told them they dealt well with a lot of things that didn’t go their way, and that’s really pleasing. It doesn’t change the fact that I’m frustrated about losing. I just feel the defeat was avoidable, and we actually could have won.

“We kept going to the end, and that’s commendable. In all walks of life you can do a hard day of graft and not get the reward. That’s what happened to us. The breaks went against us and we didn’t protect the point we had, so that’s part of the lesson we have to learn from it.

“It was good to see Omari Patrick back because he provides another option. Getting those minutes helps him on his way. Our midfield covered a lot of miles and Callum Guy was excellent against a prominent player like Nicky Law, who wasn’t allowed to establish himself.” 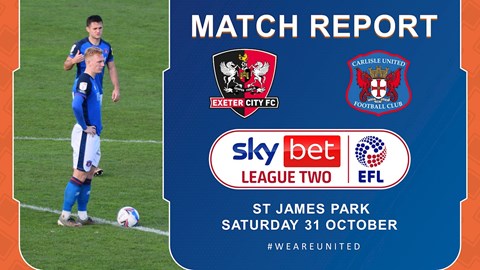 MATCH REPORT: From the Exeter away game

But with the fans enjoying the style of football, we wondered if that went any way to easing the frustration.

“Stocks and shares - and in our case three points are the value of what we do,” he commented. “We could play brilliant, we could be rubbish, whatever, it’s three points that matters.

“We played well, but we went home with nothing, and we will never be happy with that. We can be happy with the efforts, and we are, but you’ll only ever be judged on the result.

“The run we were on has to end somewhere, but we definitely didn’t give up the ghost.

“There are successes within success, if you develop players, for example, and while you try to capture today’s three points you also need to look after tomorrow’s.

“Any lower league team needs that, and Exeter are a good example because they have £4.5m to spend in January. How good is that to have that waiting for you.”

“What we’re doing is trying to build in all areas,” he added. “We’re growing and learning and it’s a great day to get better, and to understand the reasons why we were beaten.

“Losing was very avoidable in my opinion, but we have to understand why it went that way. If we continue to learn, and if we make sure we take the blows when we come, we’ll continue to cause problems for teams in the way we have been.”

MANAGER: They have good technical players


With hardly any time to draw breath United are back in league action tomorrow as they host Oldham here at Brunton Park.

MANAGER: I'm pleased with how the lads have dealt with it


It’s almost become a policy over the past few weeks not to focus too much on games in hand, or the league table, with still 20 games to be played and 60 points to be contested for.

CHIEF EXECUTIVE: Can't wait to see the banners go up


A recent fundraiser aimed at raising cash to purchase giant flags to be displayed around the stadium cemented the feeling that the fans and club have found a way to reconnect through the difficult...

MANAGER: They have good technical players


With hardly any time to draw breath United are back in league action tomorrow as they host Oldham here at Brunton Park.