Assistant manager Gav Skelton spoke to us immediately after full time at Poolfoot Farm on Wednesday afternoon to give us his thoughts on what had been a very good game. 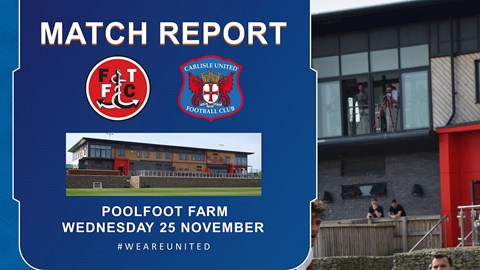 RESERVES: Report from the Fleetwood friendly

“I enjoyed the game, it was really competitive,” he said. “Reserve games can be a bit tappy and a bit passy and it certainly wasn’t that. I’m pleased for the lads that they got the win.

“The manager was here watching, there were a couple of standout performances and they’ve certainly put themselves in the picture for future games.

“It’s difficult when you’re out of the team, but they stepped up today, showed a fantastic attitude, good energy and won the game. Naturally that makes you feel better.

“On top of that there were some really good performances. Players getting 90 minutes is the most important thing, but we take a lot from the way the players played.”

With the away side having had the bulk of the possession for the first 45 minutes, he told us: “We were excellent in the first half.

“We played on the front foot, caused mistakes by pressing the ball, hit the woodwork a couple of times through Taylor Charters, and deservedly were one goal up,” he told us. “We were disappointed to concede, having done all that work to get ahead, then a lapse of concentration at a set-piece and it was 1-1. 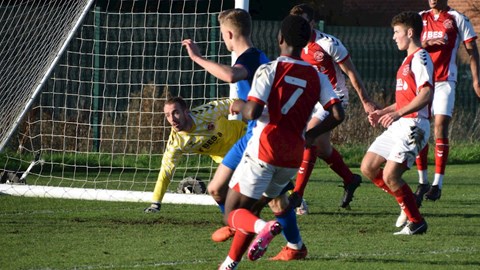 GALLERY: The Fleetwood game in pictures

“Second half we played into the wind a little but we deservedly won the game, and I was pleased for Josh Dixon getting his goal. He got into the box and on the end of a fantastic Danny Devine dribble, which he followed up with a great pull back.

“I thought some people played well against Aston Villa last week and they backed it up today. That’s all you can ask, and that puts it on the manager’s and our toes to make decisions.

“Pitch time is great, all of our players need games, and it was a chance to get in the manager’s thoughts for Sunday.”

Two players who have had a long battle to return from injury were Josh Dixon and Tom Wilson.

“It was excellent for Tom, with not having a game and being out for a long time, I thought he did really well,” he said. “He was up against a good player in Saunders, who causes problems, and who caused us problems at the start of the season.

“He struggled against him for the first 5 or 10 minutes but he sorted that out and he looked really strong and assured. He got a good 60 minutes or so and will feel good about himself, but the hard work starts now for him.

“Josh backed up a decent performance against Aston Villa, today was maybe a bit quieter, but he got a good workout. He competed better for the second ball and did that side better, which he needs to add to his game.

“His goal will be good for him. I’m sure he’ll take a lot of confidence from it, not just the performance, but he looked fit and got through almost 90 minutes with no problem. He’s not far off being ready to go, and without too much expectation he’s put himself back in the squad picture.

“I know Josh well, he’s undoubtedly a good footballer, it’s the other side he needs to keep improving on, the dirty stuff if you like. He’s showing signs of that, which is pleasing. He’s scored fantastic goals for the youth team in the past, today he got one by running into the box and tapping in from five yards, which is just as vital.

“He’s used his time wisely, not just getting fit but in understanding the game. Without getting carried away, it’s pleasing to see that.

“It’s why games like this are crucial. We’ve got young lads coming back from injury, experienced lads who need games, so it’s good we’ve got today in.

“It’s also important to make them worthwhile. It was competitive – it wasn’t just ‘you have the ball, we have the ball’ – you’re dealing with long throws, free-kicks into your box, second balls, challenges, bookings, it had a bit of an edge to it and that gets your fitness levels up rather than it being just a training game.”

With Micah Obiero leaving the pitch at half time, he explained: “He maybe felt something a little bit, but I’m sure it’s nothing major.

“We wanted to get Sam Fishburn from the youth team on against a defender with first-team experience, it was a good challenge for him and he did well.”