The 2019/20 season held special significance for Andrew Jenkins as he entered his 60th year of service with the Blues, a spell which had seen him cover everything from kit man duties to club chairman, having once held the honour - at the tender age of 23 - of being the youngest director in the Football League.

But his love affair with the club had actually started by chance way back in 1944 when, as an eight-year-old lad with not much else to do, he was pointed towards Brunton Park by one of his father’s employees.

“We must have been getting on this man’s nerves so he told us to go to Warwick Road and follow the crowd,” the chairman said whilst recounting the tale on the team bus. “I can’t remember who we played but that was it, I wanted to go all the time.

“It was funny watching Barrow recently because I can remember clearly a Christmas fixture in 1946 where we beat them 4-1. Ivor Broadis was playing, he scored that day, and I was in the Paddock. That’s one of my clearest memories of a game from when I was a boy.”

Some 13-years later and his father, prominent in the meat industry, had looked at the possibilities of becoming a club director when a vacancy became available and an invitation was floated.

Completely without the knowledge of young Mr Jenkins his dad turned down the offer, but suggested that Andrew should be given the role.

“My father ran the kiosks and did the catering and he had been thinking about joining the board,” he explained. “In the end, when the chance came, he spoke to George Sheffield [chairman at the time] and they agreed I could be put forward!

“The first I knew about it was when Mr Sheffield phoned me. He mentioned that it would be good to have some fresh ideas from a younger board member and, even though I was a bit nervous, I jumped at the chance.”

That was November 1959, and his time with the club since has seen him cover everything from laying new sleepers on the terraces to positioning and painting the new fence at the Waterworks End and eventually, some 30 or so years after first stepping into the boardroom, taking over the daunting but rewarding position as club chairman. 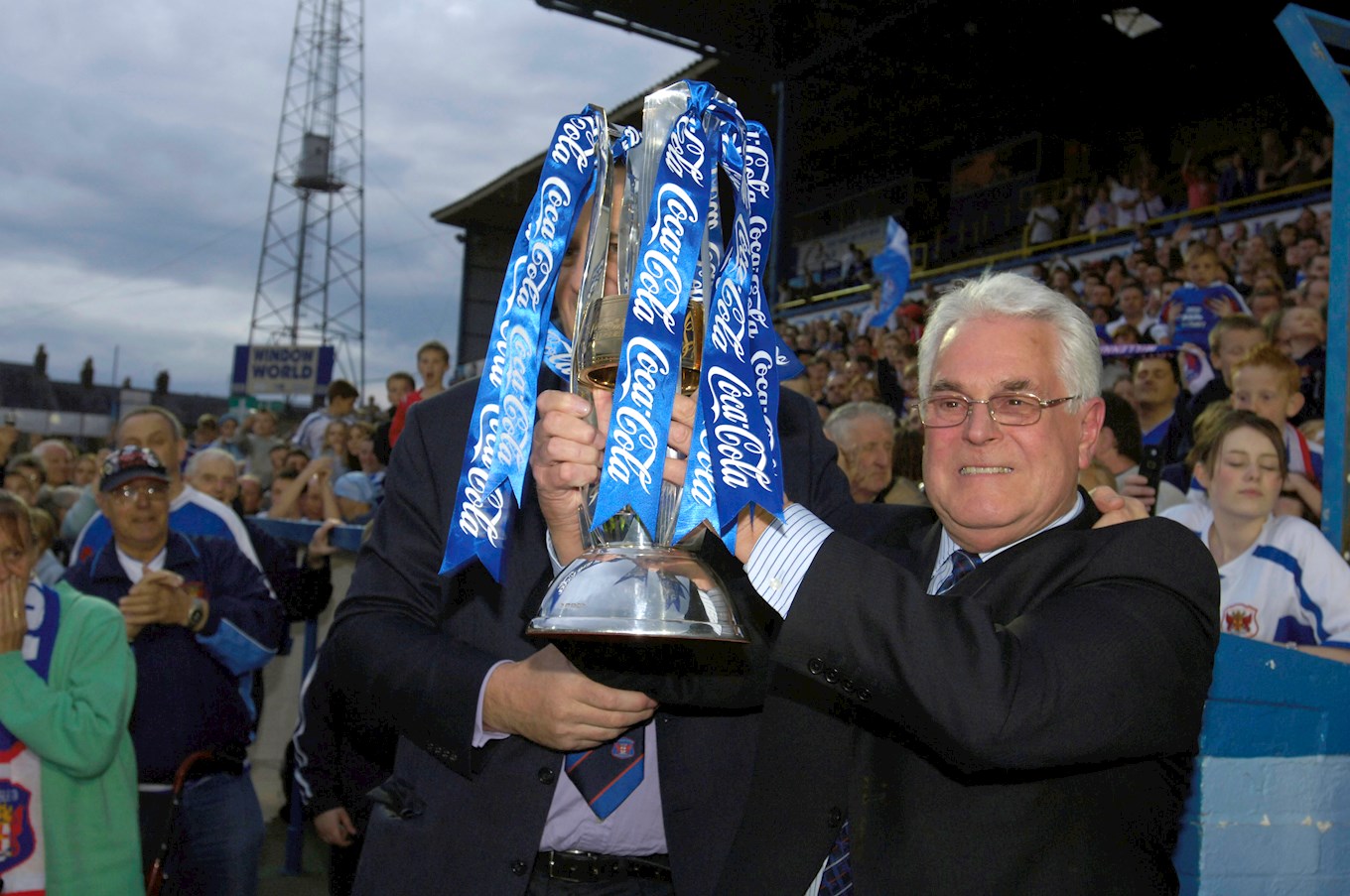 Former-manager Greg Abbott said: “One of my fondest memories from being with Carlisle was being able to keep a promise to Andrew that I made after we lost to Southampton in the JPT final.

“He loves this club, and I felt that I’d let him down, so when we got on the bus after the game I hugged him and said ‘Andrew, I’m sorry about this, but I’m going to put it right and win this trophy for you next year.’

“I was so proud when 12-months later I was able to put the trophy in his hands. He just wants his club to do well and being part of that with him was special.” 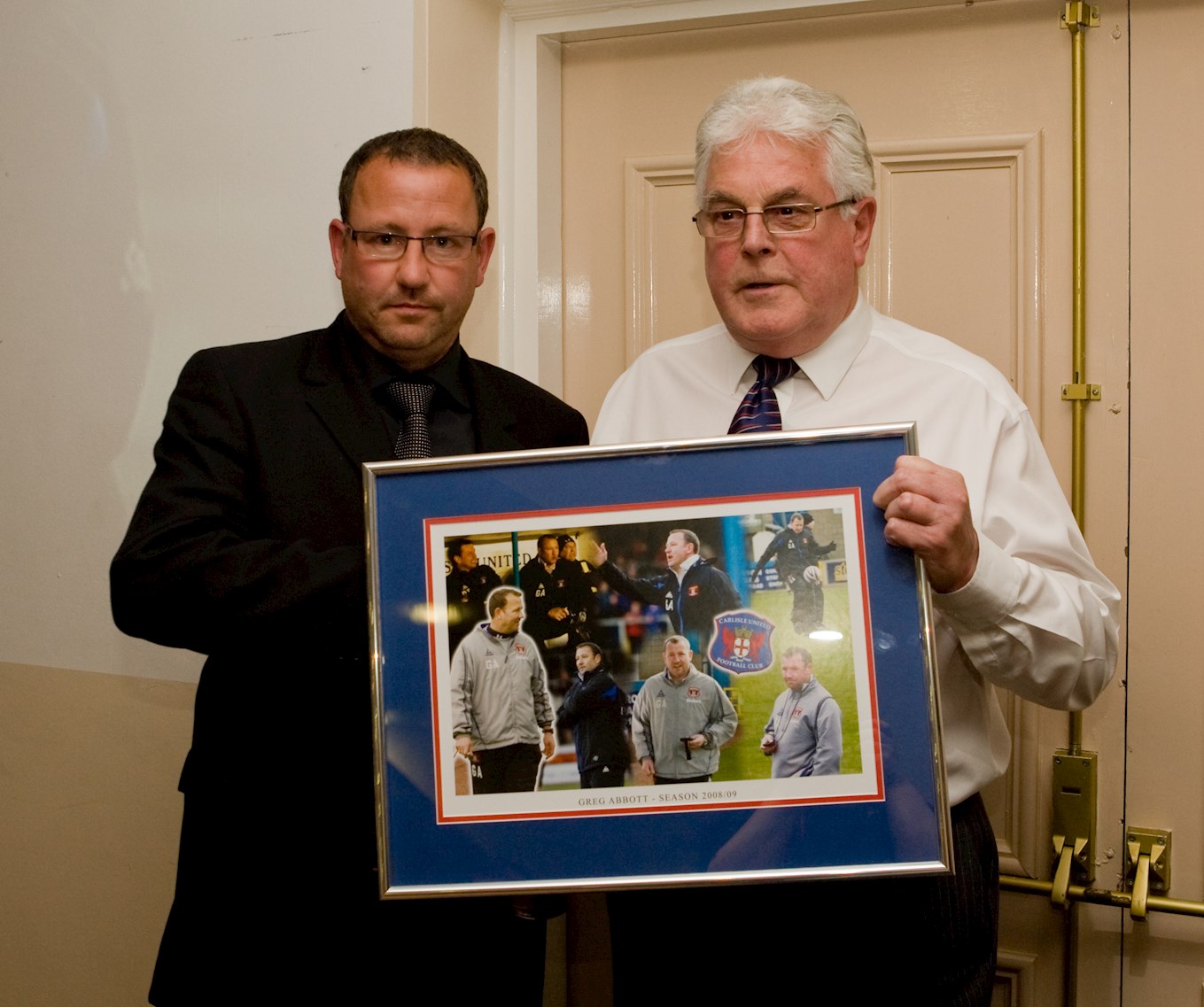 Having co-owned the club with fellow directors John Nixon and Steven Pattison for over 10 years, he can still be found at every home and away game (although that has been tempered by the recent coronavirus restrictions) as he flies the flag for the Cumbrians around the country.

“To have been a director for 60 years shows the dedication of a man who only ever wants the best for our city’s football club, which brings its own rewards to the city and county,” Steven said. “As a man he’s as honest as the day is long.

“He’s engaging, articulate, precise and he’s the best team player any club could have without actually taking to the field of play.

“His dedication as our club chairman can’t be understated and it’s been a pleasure and privilege to know and work with him – and long may that continue.”

EFL League Two board representative John Nixon told us: “Andrew is one of the most devoted and dedicated people I have ever met, be that with his family, his business or, of course, with the football club he has loved since he was a boy.

“He has been involved in the boardroom since 1959 and his ideas and input have had a lasting positive impact. In recent years he has been there to steer the ship through some rough waters, and we are all extremely grateful for that support.

“The respect he has around the football world is second to none, and whenever I attend EFL meetings he is always asked after, with best wishes sent his way.

“61 years of service is, quite simply put, amazing and his enthusiasm has never waned. He still kicks every ball and has that deep-rooted desire to see us do well.

“He is very focussed when it comes to Carlisle United and he’s a pleasure to know as a friend and to work with as my chairman.”

And the club’s honorary president David Dent, who joined the club as secretary just one-year after Andrew had taken up his directorship, said: “Andrew is a proper gentleman and he’s someone who has always been polite and straightforward.

“There is no malice in him at all and he’s one of the most genuine people you could hope to meet. I’ve been friends with him some 61 years, through all his time at Brunton Park, and his dedication to Carlisle United cannot be held in question.

“He’s played an enormous part in the progress of the club, right back from the 1960’s when the club first started moving forward. We’d only ever been in the lowest division prior to him joining the board and his new ideas and hands-on approach definitely helped the club to rethink and kick on.

“When we use the word dedication, his is insurmountable and he’s been a stalwart right through. He’s supported the club when it needed supporting financially and he’s been there as a pillar for it for so many years.”

And it wasn’t just in the boardroom that he struck up strong relationships, with many players going on to become lifelong friends despite having moved on from the club.

One such example is Scotland and Spurs legend John Gorman, who was part of the most successful team the club has seen as the Blues graced the top division back in 1974.

Speaking about a painting he did of the chairman, presented at and end of season dinner five years ago, John said: “People knew that I did these caricatures but it was a pleasure to be asked to do one of Andrew.

“When you talk about Carlisle United everybody always mentions Andrew, because his name is so closely linked to the club. He’s a decent, hard-working and honourable man and his dedication to his football club is second to none.

“He was greatly respected by his managers and the players who played there, and he became a close friend with so many. I hope the drawing makes him smile when he walks past it.” 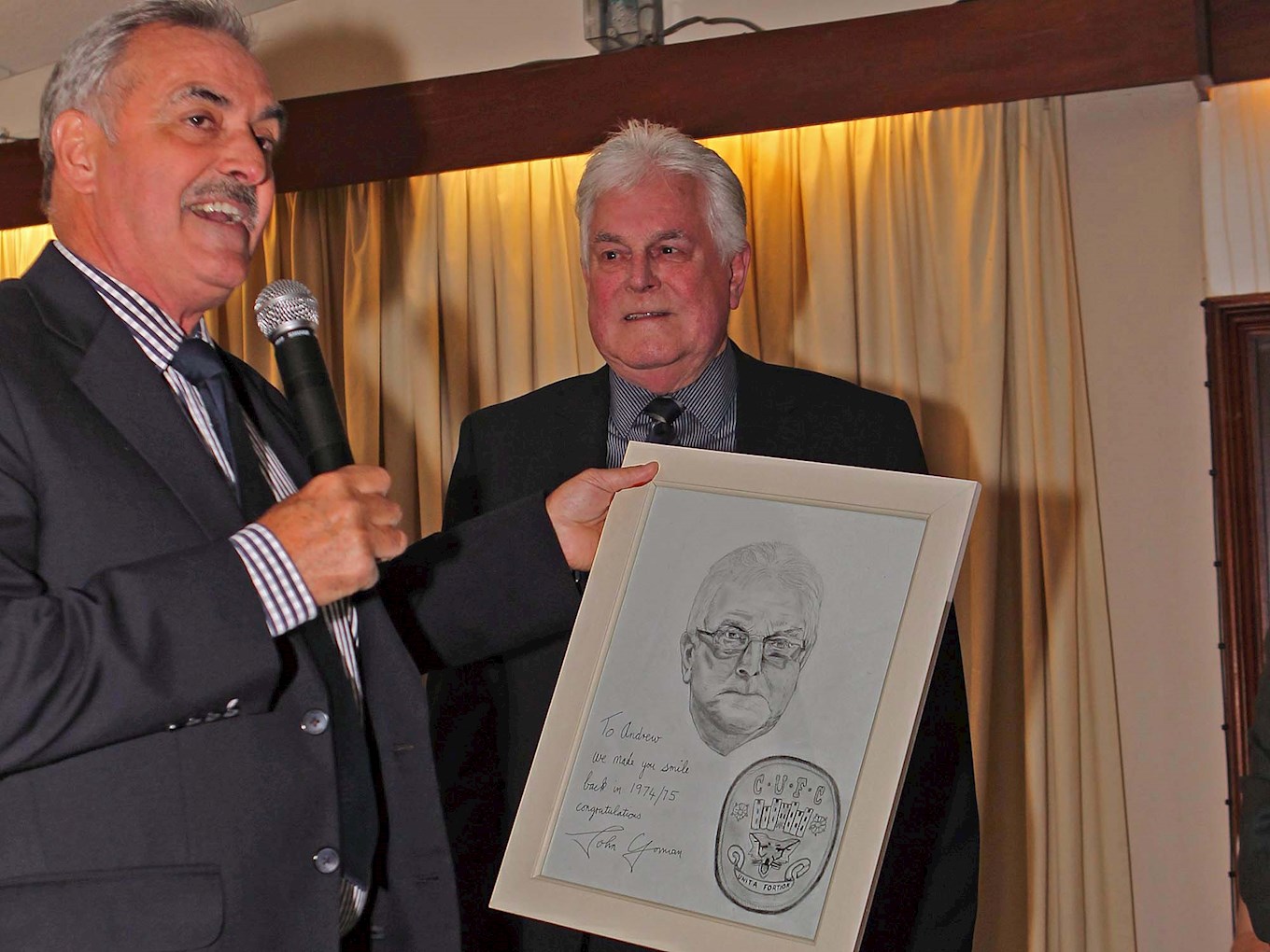 With such a significant milestone reached, the club had wide-ranging plans to celebrate the fact with Mr Jenkins with a number of events planned for the end of last season ... then Covid-19 struck and, as a famous poet once said, the best laid schemes of mice and men gang aft agley.

But in stepped director of football David Holdsworth, who insisted that something had to be done.

“It’s now 61 years of service from Andrew, and you can’t allow that level of dedication to pass by unnoticed,” he said. “I know the staff at the club were devastated when their plans to celebrate the landmark with their chairman had to be shelved due to the pandemic.

“I came up with the idea that we could produce something which would be nice for Andrew and his family to see and have, and also to acknowledge the fact that football is missing its most vital component at the moment, and that’s our supporters.

“Part of what we wanted to do was to have Andrew on the pitch so that the fans could acknowledge his milestone with him, but that opportunity was taken away with the lockdown, so I started to think about how we could all celebrate in a different way.”

“One way we can reach out at the moment, and we know a lot of our fans are engaging with us through this method, is via the internet,” he continued. “So I came up with the idea of having a song produced which would be focussed on Brunton Park, Carlisle United and Andrew.

“I hoped it would become something we could all look at and it would put a smile on our faces, at the same time as we acknowledge 61-years of dedication from a fantastic man. Hopefully Diane and the family will also enjoy it and look on it with a real sense of pride, as they should for what they have all done and given for this football club.

“I’ve been lucky enough to spend a lot of time with Andrew and he’s shared so many fascinating stories about his time here, and from when he was in the army. He’s a gentleman, and he’s a Carlisle United gentleman.” 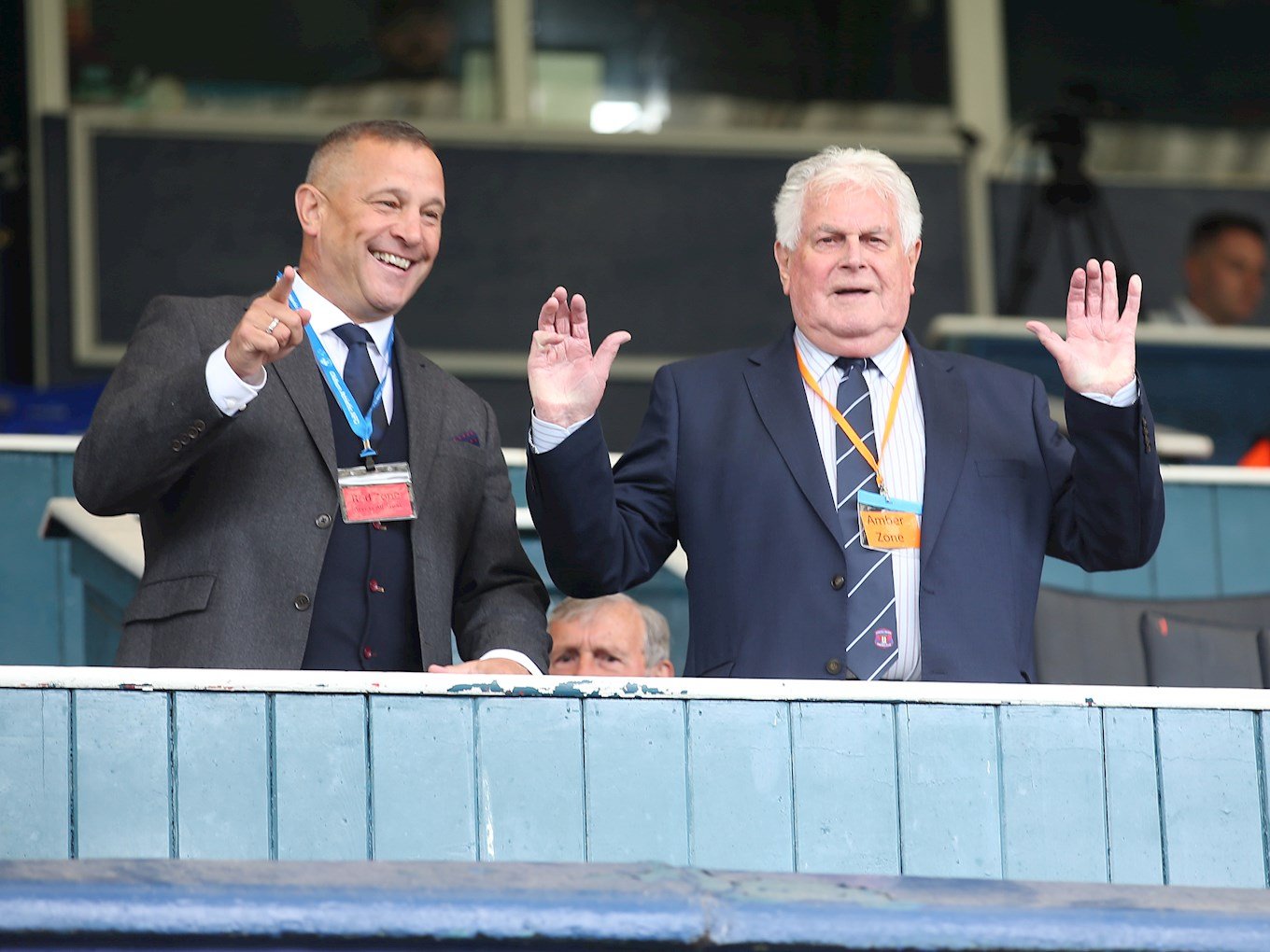 The song brought two wonderful and highly-renowned Sheffield-based artists – Katie Stewart and Maxwell Thorpe – together on a collaboration with video producer Glenn Boulton that is, well, just ‘Perfect.’

“We all sat down and talked about what the best way was to put something like this together and we feel we’ve managed to do something which is professional, poignant and even better than we imagined it would be,” he commented. “I have to say that the performance, videography and finish is nothing short of immaculate.

“The song, dare I say, is ‘Perfect’ for the club and for Andrew and I hope he and the fans enjoy it. There’s a huge heartbeat at this club and it comes from the man at the top, and he deserves our thanks for what is now 61 years of loyal service.

“He really is a class act.”