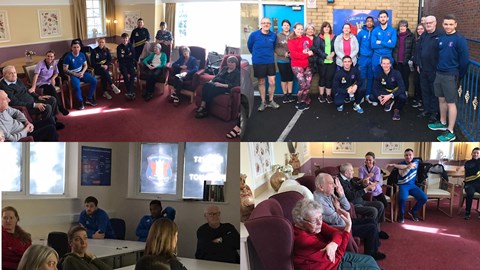 Jack, who turned 107 years young last week, still recalls many fond memories of following the Blues, who he has supported for as long as he can remember.

“I was a season ticket holder in the old wooden main stand for many years,” Jack told us. “I used to sit my son Don on my knee in there, but it burned down in 1953, which was a shame. I remember we sold a wonderful player called Geoff Twentyman to Liverpool to help to pay for the new one.

“I started following the club before we made it into the Football League, so when we were finally elected to join Division Three North in 1928 it was an extremely exciting time. We’d tried a few times before to get the votes, so we were all really pleased when we made it.

“I was at the first ever home league game in August that year. It was against Bradford City, who went on to win the division, and it was a night game. We played really well. We drew 2-2 and we had a player called Jimmy McConnell*, who went on to score a lot of goals for us.

“He actually missed a lot of good chances during games, when I think about it, but he was always there to get on the end of things.”

As for his favourite player of all time, we were delighted as a club to be able to arrange a meeting between legend Hugh McIlmoyle and Jack for his 105th birthday celebrations two years ago.

“It has to be him,” he said. “He was a great player to watch. I actually followed his career, because I thought so much of him, and I remember taking my boy Don down to Burnley to watch them play Wolves, just because Hugh was at Wolverhampton at the time.

“We couldn’t believe it when the teams were announced, and we found out that Hugh wasn’t even playing! It’s an honour for me that he’s taken time to come along to wish me a happy birthday.”

“Over the years we’ve had some good times and we’ve had some bad times, but it’s my club and I still follow the results every time they play,” he commented. “Obviously getting into Division One is a really nice memory and that was a season where we were never really played off the park, other than by Stoke City.

“We played some good football and we didn’t look out of place at all. Mostly, for me, it’s just been about coming along to watch the team, whatever division we’ve been in.”

Taking things a step further last year, first team players Jamie Devitt and Anthony Gerrard took a drive out to Barn Close to wish him happy birthday once again, as he turned a spritely 106.

“He was fantastic to talk to,” Gerrard said. “It was fascinating to hear about where he’d grown up in Carlisle and about the players he used to watch.

“He had everybody laughing with his jokes and it was a pleasure to go along and meet him.”

“That was a really enjoyable visit,” Jamie Devitt added. “Jack was obviously delighted to see us and he was even playing with a football at one point.

“He certainly keeps all of the staff on their toes and his jokes had us all laughing. It was brilliant to see him in such high spirits.”

And we helped Jack to celebrate birthday number 107 last week when Nathan Thomas popped along to say hello as part of our EFL Day of Action.

“Jack is absolutely amazing,” Nathan said. “His sense of humour is brilliant and I couldn’t believe it when I found out his age.

“He’s been a Carlisle fan for years, so it was good to be able to do this on behalf of the club.”