A stuttering start to this season saw United thrown into a period of uncertainty as they parted ways with former-manager Steven Pressley the morning after a 3-1 Leasing.com Trophy defeat at Morecambe midway through November.

Gav Skelton took temporary charge as the search for a new boss was launched, and over 100 applicants got in touch with the club through a variety of routes to register their interest in the vacant post.

A defeat at Port Vale was followed by a home draw with Cambridge as November ticked on and, as the month drew to a close, rumours started to emerge that suggested the Cumbrians were edging closer to making their appointment.

Speculation as to who that might be linked familiar and not-so-familiar names to the post, but the wait was ended on the morning of Tuesday 26 November when chairman Andrew Jenkins unveiled Chris Beech as the new man for the Brunton Park hotseat. 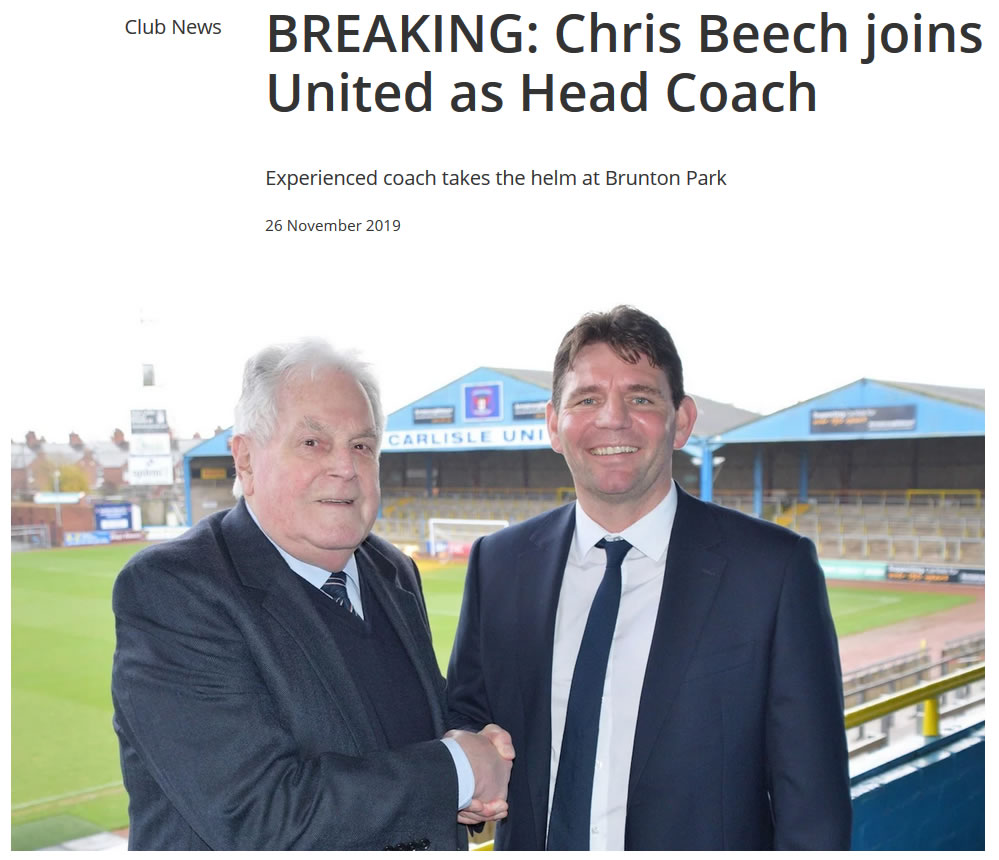 “His enthusiasm when speaking to us was fantastic to see, and he was very clear in how he wants to approach the job, both in the short-term and the long-term,” the chairman said. “We’re looking forward to seeing him put his plans into action and we’re all looking forward to working with him.

“He has a proven track record in the identification and recruitment of players and that’s something we feel is key for a club like ours. A vast amount of coaching experience makes him an ideal candidate and an excellent appointment, in our opinion.”

But it was no easy task for the new boss, as he took over a team that had lifted just 19 points from its 19 games and which was in a perilous league position, just five points above the division’s relegation spot. 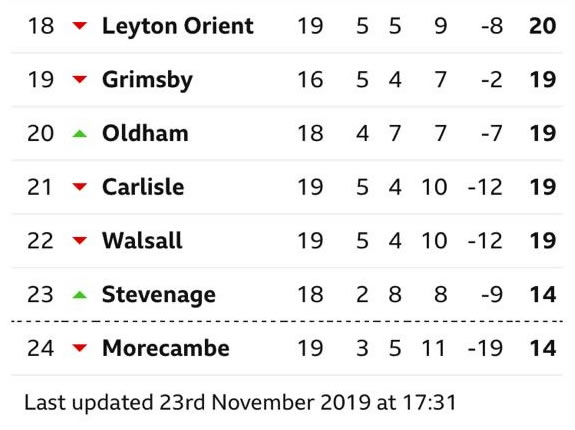 An away tie in the FA Cup second round at Forest Green Rovers was first up for the new gaffer, and that was followed by an away league fixture at Morecambe at the beginning of December, which meant that Beech wouldn’t get to see the home fans until two weeks after he took up the reins.

But he immediately set about endearing himself to the fan base with his no-nonsense approach to press conferences and interviews.

“I want traits within our performances that represent Carlisle people and that represent hard work, honesty and integrity. I want to see the players really perform on those levels and make sure that they get stronger and better. It’s an obvious thing to say but if we do things quicker and faster, it will help us to get more points.

“Whatever we say about formations or systems, I want to win. There’s a lot of work to be done but I’ve seen some good things in the team and the squad and I’m looking to utilise that.

“The big thing for me is that my way isn’t my way, it’s our way. It’s alright having a plan, and it’s great me having a plan, but it has to be bought into by the staff and through the players and their actions. From there we’ll have the fans along with us as well.”

So, onto the first test, and the long weekend trip to the New Lawn for the FA Cup second-round meeting with Forest Green.

The sides had already met in league action at Brunton Park in September, where United denied the visitors the chance of climbing onto top spot when they held them to a nil-nil stalemate.

Forest boss Mark Cooper upped the ante when he described Beech’s first game in charge as a ‘free hit’ for the newly installed boss, a comment which was quickly dismissed.

“It starts now for me and the players as far as I’m concerned,” Beech said. “We want to progress in the cup and I want the players to show me the winning traits we need to see every time we pull on the shirt.

“It doesn’t matter what competition it is; it’s about representing our football club and ourselves in the right way.”

The game itself was a cracker [unfortunately we don’t hold the rights to show the highlights] with a brace from Nathan Thomas enough to secure a replay from what was a determined and hard-working performance from the visiting Blues.

Also at the end of November

Popular coach Gav Skelton agreed a new 18-month deal, quickly confirming that his immediate future was with the club.

18-year old Taylor Charters, who had signed his first professional deal in August, headed off to Workington on a one-month loan deal.

The young Blues rounded off a good month with a 3-1 away victory ay Accrington, courtesy of goals from Kyle Soper, Elliott Day and Liam Lightfoot.

We’ll have more from our December diary on the official website soon.

Watch the video which accompanies this article here: