It was the season that brought a first-ever trip to Wembley and a romp towards the Division Three title, with some glittering performances and stunning goals to talk about along the way. 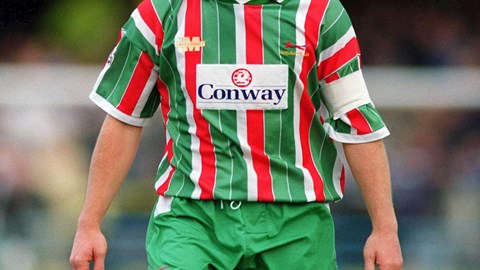 In the second part of our look at that history-making campaign we take a look at our two-legged meeting with Rotherham in the first round of the Coca Cola Cup competition, and the first away league trip of the season when we made the long journey to Torquay.

The Millers were a division above the Blues when the sides met in what was the second game of the campaign for both clubs, but manager Phil Henson was under pressure having struggled to find consistency through the second half of the previous season.

Rotherham looked comfortable despite that, and they edged in front when experienced campaigner Imre Varadi popped up to divert a corner past the stranded Tony Caig.

Things got tougher for the Blues when a long throw for United saw Derek Mountfield jump to flick the ball on at the near post. The referee spotted something – not many others in the stadium did – and stunned silence in the away section greeted the production of a red card.

It became a rear-guard action for the 10-man visitors, and it was with some relief that the final whistle blew with just the one goal conceded. 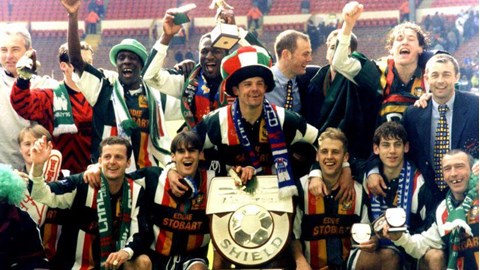 On to the weekend, and the mammoth trip to Plainmoor brought another little piece of history as Wendy Toms became the first female lineswoman to officiate in a men’s professional game.

The Cumbrians looked confident, with David Currie and Rod Thomas causing all kinds of problems out wide, and it was Thomas who brought the Blue Army to its feet when he skipped past two challenges before being chopped to the floor inside the box. Currie put the ball on the spot, but it was a penalty to forget as it smacked against the bar and ballooned away to safety.

It looked like United were going to be made to pay for the miss when Richie Hancox rifled a beauty into the roof of the net early in the second period, but Carlisle upped the tempo and peppered the opposing box with a string of testing set-piece deliveries.

One such inswinger from Currie eventually found its way to Mountfield, and he powered a thundering header back across the face of goal. David Reeves made it two in two league outings when he bullied his way through the static defence to finish it off from close range.

The weekend draw was followed by a return to Brunton Park for the second-leg of the Coca Cola Cup meeting with Rotherham, and things looked bleak for the Blues when the impressively mullet-haired Andy Hayward stole in at the back stick to make the aggregate score 2-0 inside the first 10 minutes.

Hold the back page though as Reeves popped up to smash one into the net from a tight angle to give the hosts a glimmer of hope, and things were suddenly all-square when Dean Walling stayed forward from a cleared corner. He was rewarded when he got on the end of a clipped delivery to guide a diving header into the net.

2-1 to Carlisle on the night, 2-2 on aggregate, it was suddenly all to play for and United got themselves in front for the first time in the tie when Reeves got onto the end of a huge punt forward. He headed for the box and muscled his marker out of the way, and completed the turnaround as he poked the ball beneath the advancing keeper.

We’ll be finishing off our round-up of the August 1994 fixtures in our next look back at this fantastic season.